MORE PIGS FEEDING AT THE TROUGH ONCE AGAIN 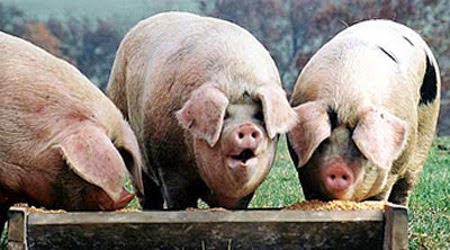 I think we all knew it was too good to be true. Last year when Saundra Kee-Borges announced that she was finally retiring from the Segarra Administration, a sigh of relief could be heard coming from many Hartford people. A collective "thank you" and good bye , oh and by the way can you take your fiancee Terry Waller with you came from many.

Although she had explained she wanted to spend more time with her family, that was short lived. Many thought it might be a coincidence that the timing of her retirement announcement came at the same time of the announcement  of a Federal Corruption Task force being launched in Connecticut, but time will have to tell on that one.

It now appears that Saundra Kee- Borges had other plans for retirement. On January 31, 2015, her retirement date, one of her last official acts as Hartford's  Corporation Counsel was to author an agreement benefiting herself. In a document obtained through an FOI request, Kee-Borges initiated and signed an agreement hiring herself back at $250.00 an hour. That works out to $10,000 a week for a forty hour week. Not a bad retirement job if you can get it. But Kee-Borges has never seemed to be embarrassed by taking advantage of the people of Hartford when it benefits her checkbook.

It makes you wonder what kind of operation she ran as Corporation Counsel that no one was mentored to take her place when she left. Is their no one in her office capable of covering the legal tasks we are now willing to pay her $10,000 a week for?  And is this the best route to go, would it make more sense to actually hire an outside firm that has actual expertise in this type of legal work aside from sitting behind a desk at City Hall

For those people struggling to pay their taxes and put food on the table, take consolation in knowing that Sandy Kee-Borges will be very comfortable in her retirement courtesy of her law school study buddy Mayor Pedro Segarra.

The engagement letter Kee Borges wrote for herself is below. There are no restrictions on the time length or dollar amount in the letter. 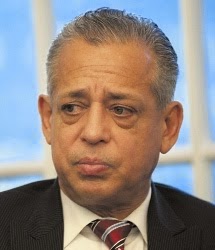 SEGARRA- "What do I do now, I'm confused"
No, let me rephrase that, leadership DEMANDS accountability. It needs to be demanded by the leader of both himself as well as the people they place around themselves.This was no more obvious than on tonight's NBC Connecticut interview of Pedro Segarra regarding his bad information he was slinging at Luke Bronin.  Segarra issued a release yesterday with allegations that Bronin was not a consistent voter in Hartford's Municipal elections. Those charges were untrue and quickly proven false by local and State voting record.

You would think some sort of apology would be forthcoming, but no, in true Segarra fashion , his explanation on camera was that a "staff person"  had screwed up by relying on bad information.  No Pedro, you screwed up by relying on bad information from a staff person. At the end of the day, you are at the top of the ladder and it is your fault. That is called LEADERSHIP. I know you have found that it is much easier to throw people under the bus and ignore any accountability, but in the end Hartford deserves some leadership.

But not to beat a dead horse here, but some leadership and accountability might have saved some major problems in the Hartford Fire Department from happening. A strong tone set for what you expected from your Fire Chief and Fire Department might have quite possibly saved a lot of embarrassment as well as a life. Your Chief was warned of dangerous activities by firefighters at the very same house where a firefighter lost his life caused by the same activities the Lieutenant wrote and warned Chief Huertas about. Apparently to this day, nothing has been done or changed. That is not leadership

I guess we shouldn't be surprised Pedro when nothing changes with you. I half expected to hear a lame "I'm sorry , I made a mistake by calling Bronin out. I was wrong" That's what men, or even more importantly LEADERS do. What did you do when your spokesperson sent out the release with  a date from a year ago for your State of the City Address? And then it took her over 24 hours to send out the correction. I'm sure in true Segarra fashion you did nothing, In fact it was probably a joke around the office the next day "Guess what that crazy Maribel did now" ha, ha,ha

This is not the way to run a City. We deserve so much more from our LEADERS.

Pedro, look in the mirror tonight after you finish telling yourself how wonderful you are and repeat these words " I am sorry Luke, I screwed up". It probably won't be as difficult as you think and you will have taken the first step down the path of leadership. Try it , you might actually find you like it
Posted by KEVIN BROOKMAN at 7:52 PM 21 comments: 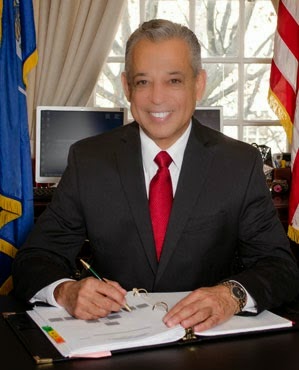 Hartford's Mayor Pedro Segarra likes using Mark Twain quotes, here is one he may want to consider living by : "IT IS BETTER TO KEEP YOUR MOUTH CLOSED AND LET PEOPLE THINK YOU ARE A FOOL THAN TO OPEN IT AND REMOVE ALL DOUBT", Mark Twain

Segarra apparently lobbed allegations against one of his opponents in the upcoming November Mayoral election, challenger Luke Bronin. Segarra appears to have stated that Bronin did not vote in the last Municipal election in 2013. Apparently Segarra felt that would make Bronin look less Mayoral.

With the choices we had in that election, it is surprising anyone voted .

But as is typical of many things Segarra claims, he was wrong. Voting records show that Bronin did vote in the election. I doubt we will see any apology to the Bronin campaign anytime soon from Segarra. I doubt his ego would allow him to admit he was wrong and say those words "I'm sorry"

If you are going to sling mud, at least make sure it is correct Pedro. But then again, what should we expect, his staff couldn't even get the date of his "State of the City Address" correct on the invite, they were a year late.

I am hoping the voters of Hartford see Segarra for the loser he is and realize there are other people out there willing to lead Hartford out of the Segarra gutter and begin bringing professionalism and some real leadership and accountability back to City Hall.

Segarra can attack Bronin on untrue  allegations but I have yet to see any response to the Touch of Class  Escort Service documents. I think that who is possibly soliciting prostitutes is more important to voters than who may have missed a voting opportunity 3 or 4 years ago.

It matters even less when it is a lie from a desperate campaign
Posted by KEVIN BROOKMAN at 5:00 PM 36 comments:

I hope you take a few minutes and watch this video.

This must have been a great Wedding surprise for this lucky couple. Maybe with more creative priests like Father Kelly churches would start filling up again This is a lot different than what I normally post, but I thought it was a great video, The church also reminds me of the church  I was baptized in and grew up in, and that my mother still attends today, St, Joseph's in Windsor. 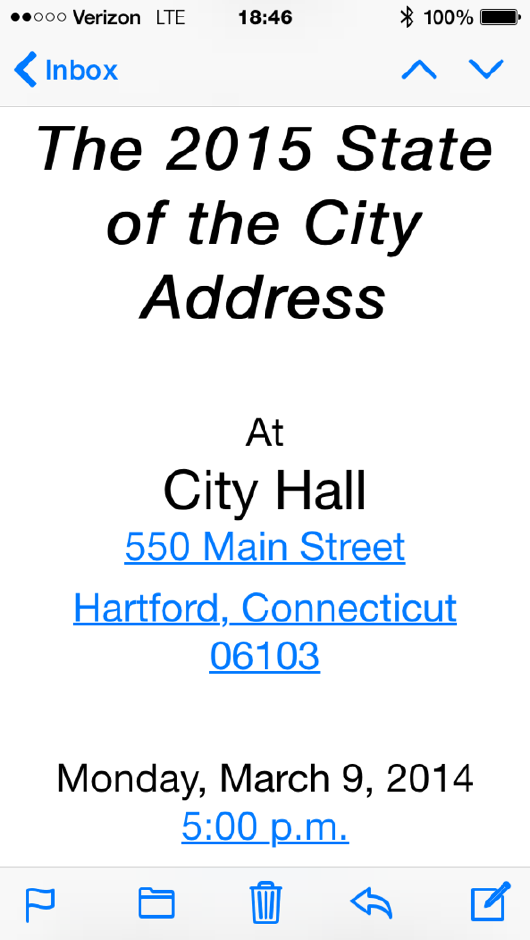 The Invite, A year late from Maribel
We all know by now that money is no object when it comes to staff in Mayor Segarra's Office. Between the scheduler, the Communications Staff, the videographer and the bids for the Public Relations Staff now being solicited. The Office  of Mayor Pedro Segarra should be running like a well oiled machine.

I guess money can't buy everything, At least not for Segarra.

The attached Press Release was e-mailed out this afternoon by Segarra's top notch staff announcing his State of the City Address , which is supposed to be next Monday. I guess his staff is in the City Hall Time Warp since thy advised everyone to "save the date" and mark their calendars for a year ago
Monday March 9, 2014. Yes 2014

Shouldn't  we expect better from our $200,000 investment in the "Media professionals"?

Here is the release:

The Office of Mayor Pedro E. Segarra cordially invites you to

The Mayor will deliver his speech in Council Chambers, 2nd floor.
Additional seating and live video projection will be available in the Atrium.
For the second year in a row, on-site translations will be offered in Spanish. Those who are interested should contact Hilda Muñoz for details: hilda.munoz@hartford.gov, or (860) 757-9738
*** Se ofrecerá traducción en vivo por segunda vez. Personas interesadas en atender favor de contactar a Hilda Muñoz, hilda.munoz@hartford.gov, o llamar al (860) 757-9738


Open to the public. All are welcome.
RSVP: pressroom@hartford.gov