In what may be history repeating itself, a resolution is being introduced for Tuesday night's Council meeting to remove Deputy Corporation Counsel L. John Van Norden from his position.

Van Norden had previously left Schenectady , New York under a cloud of suspicion as their City Attorney. You can read that story here.

The resolution is being introduced by Councilman Larry Deutsch and sources are telling me that other Democratic Council people will possibly be signing on to the resolution. I am also being told five votes required for the passage are probably a good bet.

Van Norden has had his issues on numerous occasions recently for intemperate behavior in dealing with the Council and related City business including an  e-mail describing Councilman Raul Dejesus as apparently having mental health  issues.

Here is the proposed resolution: 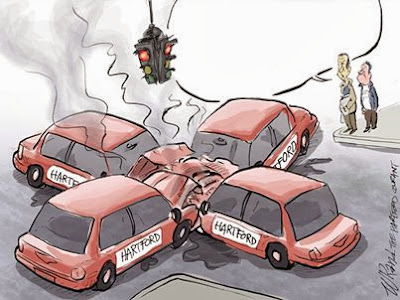 Take a couple minutes if you have time and go to courant.com and add a caption to the drawing above by clicking here


My thought, "This is Hartford, they all said they had the green light" or maybe "Sandy, don't
forget the Crabshack free drink coupons"
Posted by KEVIN BROOKMAN at 8:39 PM 2 comments:

Please share: The City of Hartford is recruiting for Police Officers. Applicants must be 21 years of age by January 8, 2014, must be a citizen of the U.S. and must have a high school diploma or GED and a driver’s license. Extensive testing is required. Hartford residents will have 10% added to their passing grades. Applications will be accepted until Friday, November 22, 2013. For more information or to apply, visit the Human Resources Department on the ground floor of Hartford City Hall, 550 Main Street.
Posted by KEVIN BROOKMAN at 8:20 PM 2 comments: 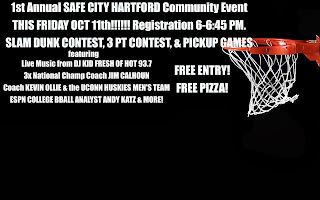 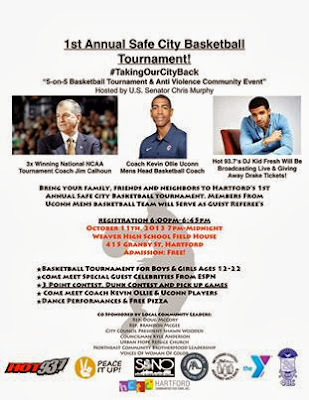 Posted by KEVIN BROOKMAN at 8:18 PM No comments:

NO PARKING AREAS FOR SATURDAY MARATHON 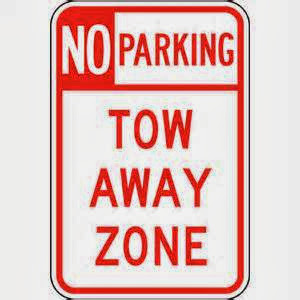 
NO PARKING AT THE FOLLOWING LOCATIONS:


TOWING OPERATIONS WILL BEGIN BY 5:00 AM

MAIN STREET: both sides from PEARL STREET to PARK STREET

WASHINGTON STREET: both sides between CAPITAL AVENUE AND PARK STREET

LAUREL STREET: both sides between PARK STREET AND CAPITOL AVENUE

CAPITOL AVENUE: both sides between LAUREL STREET AND WASHINGTON STREET

LAFAYETTE STREET: both sides between CAPITOL AVENUE AND RUSS STREET

RUSS STREET: both sides between LAFAYETTE STREET AND WASHINGTON STREET

HUDSON STREET: both sides between BUCKINGHAM STREET AND PULASKI CIRCLE

CHURCH STREET: both sides between MAIN STREET AND TRUMBULL STREET

WYLLYS STREET: both sides between MAIN STREET AND WETHERSFIELD AVENUE

WHITNEY STREET: both sides between ASYLUM AVENUE AND FARMINGTON AVENUE

FARMINGTON AVENUE: both sides between WHITNEY STREET AND ASYLUM AVENUE