TIME FOR WOODEN TO LOOK IN THE MIRROR 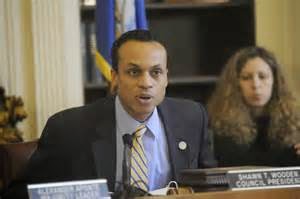 Wooden's complaint alleges that Coleman did not properly itemize his income on his filings.

Apparently Wooden's concerns only apply to his opponent , and not himself.

According to staff at the Connecticut Elections Enforcement Office, as outlined in CT General Statutes 9-608, all expenses and secondary expenses must be itemized on the filings. This would include payments to "field workers" and items such as office supplies, printer ink, and clipboards.

Connecticut General Statutes 9-608- (B) an itemized accounting of each expenditure, if any, including the full name and complete address of each payee, including secondary payees whenever the primary or principal payee is known to include charges which the primary payee has already paid or will pay directly to another person, vendor or entity, the amount and the purpose of the expenditure, the candidate supported or opposed by the expenditure, whether the expenditure is made independently of the candidate supported or is an in-kind contribution to the candidate, and a statement of the balance on hand or deficit, as the case may be; (C) an itemized accounting of each expense incurred but not paid, provided if the expense is incurred by use of a credit card, the accounting shall include secondary payees, and the amount owed to each such payee;

Although SEEC staff would not address specific campaigns or their actions, they did answer questions as to how things were supposed to be filed, and it would appear Wooden's campaign is not in compliance.

Wooden was quoted in todays article, and in his complaint apparently,  as saying that "This (Coleman's reporting) violates the transparency and integrity of the CEP system and gives him an unfair political advantage," Wooden wrote in the complaint. "It also violates the public trust. The public has a right to know how he is spending his publicly-financed campaign money and where the $83,550 grant he received from the public to run his campaign went.". Councilman, transparency is a two way street, whatever applies to Coleman applies to you as well

In the attached Wooden filing, you can see numerous payments to "the Vinci Group" many with notations for field staff. .Apparently the Legislature's intent with the reporting requirements for the Citizen's Election Program was to strive for transparency in the reporting and use of taxpayers funds. Anyone should be able to look at the forms or go on-line and see who is being paid to work on a campaign, not just see a blanket payment to the Vinci Group.

Are there any lobbyists, City Vendors, politicians or others making money off Wooden's or anyone elses campaigns? That's called transparency and if Wooden wants Coleman to be transparent he needs to hold himself to the same standard

SEEC also said that in addition to the specific statue, they spelled out the need to itemize in two other places in the manuals given to campaign treasurers, on pages 91 and 104 of the detailed handbook because they felt the transparency issue was important.

I guess the facts don't matter as much as the headlines obtained from frivolous complaints being filed.

And yes, I do support Coleman for re-election, just to be transparent about that

THE RED FLAGS WERE IGNORED

After reading that , most people seem to wonder why Luis Feliciano was offered a position as a Hartford Police Officer. Granted, the murder charges were not prosecuted for whatever reason, but the testimony by Springfield officers regarding gang affiliations and the "drug trafficking" evidence found after the search warrant of Feliciano's apartment  should have drawn his character to be a police officer into question

The fact that the homicide charges were not prosecuted I guess legally gave Feliciano the right to say he had never been arrested or convicted of a crime, But Hartford Police applicants are rejected for far less than being charged with murder.

Unfortunately for HPD, the Civil Service Commission report in Feliciano vs. the Springfield Police was released after Feliciano was hired by Hartford. The hearing officers report and comments were telling statements into Feliciano's character. Commissioner Christopher Bowman found that Feliciano's testimony was less than credible and stated that it didn't carry any weight in his decision because he didn't consider Feliciano truthful.

Now lets move ahead to recent history. Yesterday, 7/29/2014 Hartford Police Officer Luis Feliciano was suspended as a police officer and his badge and gun were taken away. All the pieces of the puzzle are still coming together but according to several  police sources, somehow Feliciano was ensnared in an FBI investigation being conducted at the Hartford Walmart. The scope of that investigation is unknown , but at least one source confirmed that the FBI is not currently investigating Feliciano, they just uncovered the original wrongdoing

Feliciano's alleged activity was apparently uncovered by the FBI during the course of their investigation, including video evidence, which was then turned over to HPD and their Internal Affairs Division. Again, according to police sources, Feliciano's activity apparently involved theft of Walmart merchandise while he was working private duty jobs at Walmart.

The value or specifics of the merchandise were not available at this time as the HPD Internal investigation continues.

TOMORROW ON THE BLOG

Check back tomorrow to read about the latest HPD officer in hot water and most likely facing criminal charges as the result of an investigation initially launched by the FBI. The officer in question was walked out of police headquarters earlier today after being placed on suspension and relieved of his badge and gun
Posted by KEVIN BROOKMAN at 11:01 PM No comments: