DO WE NEED ANOTHER VACANT LOT ? 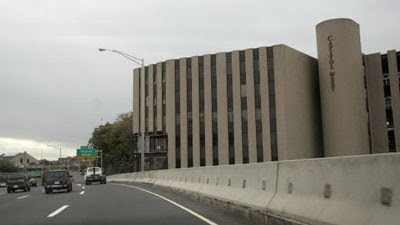 Ask just about any Hartford resident how the demolition of the "Butt Ugly" building affected them as a Hartford resident, and most would answer it hasn't. The symbol of Hartford's corrupt former Mayor Eddie A. Perez's actions that sentenced him to prison, was quickly torn down by his successor. The result is even more symbolic of Hartford's past and future. Another vacant lot.

The area bordering the northern end of Downtown Hartford abutting I-84 sends a much clearer message than the Butt ugly building ever did. Hartford is unable to fill the large expanse of empty downtown acreage. There are a lot of reasons for this, the economy, crime, a City who has no clue what economic development means, business unfriendly tax structures and the list could go on and on. 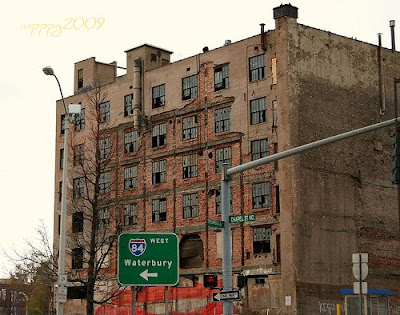 One of those vacant lots showed a lot of promise a few years ago when WFSB Channel 3 announced plans to build a state of the art television facility and move their operations there from cramped headquarters at Constitution Plaza. That deal eventually fell apart and according to one high ranking official from Meredith Corp., the parent company of WFSB, he told me that "if it wasn't for the Mayor and his staff, we would still be in Hartford".

That was the night that Channel 3 had their reception and dinner showing off a beautiful new building a couple years ago when they left Hartford for Rocky Hill. That is a great facility that should be standing proudly on the corner of Main Street and Morgan Street in Hartford, filling one of those long vacant lots.

Today the Hartford Redevelopment Authority will be voting to branch out and create another vacant lot just west of Union Station. This vote will be an attempt to take the property known as Capitol West by emminent domain. This effort will most likely cost the taxpayers of Hartford upwards of $5 million dollars. The environmental cleanup alone has been estimated at $2.5 million from what sources have told me.

The sad part is that there is no plan for this property, other than to create another surface parking lot. I had thought that after the New London debacle, Kelo vs New London, the emminent domain laws had changed. That was a case where New London forced people out of their homes by grabbing the proerties through the emminent domain process. As it turned out after the property owners were forced out and the land cleared, the proposed project, an office park for Pfizer, never took place and the land sat empty.

I had thought Governor Rell had the emminent domain laws changed so that any taking of property by the government could only be done when an actual plan and project for the use of the land was in place, and I don't think creating a vacant lot counts as a project.

Similar to the "Butt Ugly" building, I doubt you could find anyone that can give you a solid reason as to how spending $5 million to create another vacant lot will affect their quality of life in Hartford. The Hartford Insurance has agreed to kick in to pay for the property, and I am not disputing that the Hartford has been a great Corporate neighbor to Hartford's neighborhoods. The Hartford though could afford the entire project and develop something on that property. The residents of the City of Hartford can not afford to fund this project at all.

It may be a feel good thing for the Mayor and City Hall to say they took away another eyesore, but it is not money well spent. That $5 million dollars could fund quite a few new police officers or at least prevent any from getting laid off at budget time. It could fund programs to revitalize our parks and re-hire some of the laid off workers from DPW. It could even fund the Adamowski bonuses for at least the next two years.

Creating a vacant lot at the taxpayers expense is nonsense. Maybe it would make more sense to leave the building there as a constant reminder that we need to do better to attract new business and celebrate when something useful actually goes there.The only plan that may possibly take place in that area is the eventual development of the high speed rail system from what I have been told

The Hartford Redevelopment Agency will meet tonight to hold a Public Hearing and Meeting in the Plaza Level Conference Room located at 260 Constitution Plaza, Hartford, Connecticut 06103. The meeting will be held at 6:00PM
Posted by KEVIN BROOKMAN at 3:39 PM 11 comments:

Last week the Council and Board of Education members were summoned to the Capitol regarding the $2.7 million in bonuses handed out. 5th District Representative Marie Kirkley-Bey was asked what she thought about the bonuses, her response was quite clear "I'm pissed".

The videos below will give you an idea of some of the other responses. Some were political, some were quite candid. In the future I'm going to try to incorporate more video into the blog, let me know what you think.

Not all of the comments were recorded, but Councilman Corey Brinson actually made some comments at the end of the meeting that were interesting. It actually sounded like we may have a real Republican on the Council for the first time in a long time. He spoke about fiscal responsibility which may prove interesting this year at budget time. I doubt we will se him "abstaining" on tough budget votes.

The only Councilperson not present was Dr. Painter and the only Board member that was present was Robert Cotto. State Senator Fonfara came in midway through the meeting but seemed to make it clear that he did not want to be there.