"Country before party". That is a quote from Senator Richard Blumenthal last week on CNN referring to Congressional action toward President Donald Trump.

After hearing that , I had to think "what a great idea, if our politicians actually started thinking about us and our Country first".

The more I thought about it though , I had to ask myself, "When does this Country before party thing begin Senator?"

Now I realize  that Donald Trump is a lightning rod, and no matter what I write or post is probably not going to be popular with at least half of the people. But a sense of fairness should be the same, whether viewed by a Democrat or a Republican or an unaffiliated person.

I don't think anyone, except maybe the blindest of staunch Hillary supporters, can deny that we had a couple of very flawed candidates to vote for last November. Only time will tell if voters made the right choice. History will be the referee of that, butI hope they did, and even I have my doubts some days, but those doubts would be much stronger if the Clinton's regained control of the White House. I think one thing no one can deny is that we know what we got with President Trump, warts and all.

I think with the Clinton's, we would never know. I often wonder what the outcome would have been if Democrats realized Hillary Clinton did not have ownership or some God given right to the Oval Office. A decent candidate probably would have been a landslide against Trump.  A Biden /Trump race may have quite possibly been a much different outcome today. No scientific polls, just my gut feeling. Especially since we now know how wrong those polls were right up until the last hour the voting booths were open.

So back to Connecticut's renowned Senator and Vietnam veteran  Richard Blumenthal. When does that Country before Party thing begin?

Where was it after the Benghazi operation that resulted in the deaths of American patriots? Or was it in the words of Hillary Clinton, "What difference does it make?"

Where was "Country before Party" in the Clinton's private server? Trump was the focus of attention this past week after a meeting with Russian Officials and he allegedly divulged "classified" information. How much classified information was divulged in emails possibly hacked from Hillary's private, unauthorized server? I guess we may never know .

What was the deal with the Clinton Foundation and how much political influence was purchased through "donation's" to the Clinton's toy chest?

And finally, I have to ask why Russia only became an issue after Hillary Clinton lost. I guess if Hillary won the election she could have used her Benghazi quote again if questions arose regarding Russia  "What difference does it make?". If she was in the White House, who would even care about Russian influence?
Posted by KEVIN BROOKMAN at 12:40 PM 25 comments:

I GUESS THE HONEYMOON IS OFFICIALLY OVER

This picture below was posted on Facebook this morning.

It would appear to me that people are finally seeing through the "Kingdom of Luke" and his "Town Hall Tour" and his related publicity stunts to attempt to further his political career, and the careers of those around him.

Luke how about some reality and leadership instead of stunts.

How about treating people with dignity and respect instead of treating them like subjects of your monarchy?  I would think we would get a lot more from our unions if you left the room and we could get someone to sit at the table that they could trust and treated them with respect.

And enough of the false hopes and promises. To tell residents that $40 million dollars from the State was almost assured was disingenuous, if not an outright lie. And the front page of the Courant this morning pretty much assures us the opposite.

How could any legislator vote to bail out Hartford when we still refuse to help ourselves. That might be a tough sell to their constituents. Explain why you voted to give money to Hartford while at the same time they cut funding to their own towns. Sounds like a tough sell

I know, PILOT.., unfair, It's the States fault, blah blah blah. Keep repeating it , someone might start listening. In the meantime, what are you going to do to fix it? It might work in the Kingdom of Luke, but isn't working with the real people in the real world.

And what good will $40 million dollars make if you still refuse to make any structural changes as you have not done in your first year and a half. Your crash and burn mentality when it comes to City employees and Labor Unions is getting us nowhere , as you continue to fund useless positions that only make you feel more secure as opposed to making the City more secure.

It is kind of sad though, some of Luke's ideas might be somewhat sound, but his delivery and communication skills are terrible and the rapidly growing mistrust is not going to help.

In the meantime, if you would like to be part of the Wildlife Safari Tour, mail your checks in today to be first in line. All deposits are non-refundable. In true Bronin style, the money will be spent before it is even received. Please make checks payable to "Bronin for Mayor 2019 Re-election Fund".

The last sentence of the flyer mentions "to win Donald Trump style" Do we have our own "mini-Trump" in the making? 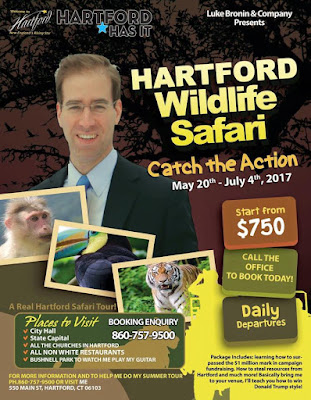 WE THE PEOPLE PROGRAM 5-15-17, OUR GUEST HPD UNION PRESIDENT