WHAT HAS CHANGED SINCE THE BAERGA COMPLAINT? OFFICER BAERGA RETURNS TO WORK

The short and quick answer is nothing has changed, although it has been months since the issue came to light.

HPD Officer Kelly Baerga had filed a hostile work environment/sexual harassment complaint against  supervisors at HPD and the City of Hartford on February 11, 2019

You can read more details here.

Her is the original complaint below:

Baerga Complaint by on Scribd
The bottom line , after all of the complaints, all of the media attention, and all of the the Internal affairs Investigations, nothing, or at least very little has changed.

Kelly Baerga this week returned to her patrol duties on the midnight shift. Sergeant Andrew Rodney, one of the officers accused of Baerga's harassment still remains in his position as a Sergeant and a supervisor. Despite his Internal Affairs Investigation and a disciplinary hearing, nothing has been resolved. No punishment for his behavior, not even any retraining or corrective action taken. I am told that Rodney's behavior is under review by Interim Chief Jason Thody.

This matter has been hanging in Limbo for far too long. Officer Kelly Baerga deserves a resolution of this matter, and some action should have been taken before she returned to work.If Sergeant Rodney's actions were substantiated, Baerga should not have to face him whenever she goes to work knowing that Rodney's actions went unchecked by "the good ole' boy network" as some have claimed. This matter needs to be resolved one way or the other immediately.

A request for an update on the matter made to HPD earlier today has not received a response
Posted by KEVIN BROOKMAN at 3:09 PM 36 comments:

I received a call earlier this evening from a resident having an issue with drug dealers setting up shop in front of his home and he was looking for some advice and help dealing with them. I offered to call LT. Boisvert , who I thought was the Lieutenant for that area, apparently it is LT. Santiago's area but LT Boisvert offered to contact LT Santiago and pass the information along

. I texted the resident and told him he should be hearing back from HPD. I told him if he didn't hear anything in a couple days to let me know and I would follow up. I was pleasantly surprised when he immediately texted me back and said there were two HPD Officers at his home right then dealing with the problem, all within a matter of minutes.

Apparently the Hartford Police Union President has taken it upon himself to allegedly begin lobbying and campaign efforts for Hartford Mayoral candidate Eddie Perez. Perez a convicted felon after pleading to charges related to his corruption arrest announced earlier that he was attempting to regain the Office that he resigned from in disgrace after his arrest, trial and conviction on corruption charges.

In a strongly worded letter sent to HPD Union President John Szewczyk on Monday, HPD union Vice President Joe Sherbo, Union Secretary Nicholas Trigilia, Treasurer Chris Reeder and Chief Steward Anthony Rinaldi all signed onto the letter asking that Union President Szewczyk  "immediately cease and desist all political activity as it relates to the Mayoral race, unless the Executive Board has discussed and agreed to support a particular candidate "

Furthermore, the letter stated "If you decide to continue your personal support for Candidate Perez, you are strongly advised to use your own personal vehicle to attend events , and to not identify yourself as President of the Hartford Police Union in those settings.

The HPD Union President is given a leased vehicle paid for through Union membership dues.

The letter also states that the HPD Union does not support candidate Eddie Perez at this time.

As a sidenote, several HPD Union members have informed me that a "Vote of No Confidence " in Interim Chief Jason Thody is being pushed for as an agenda item at the September HPD Union membership meeting. 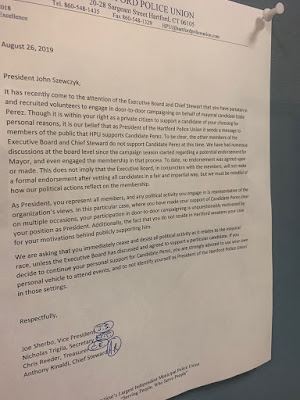 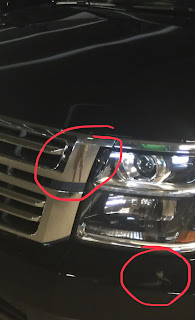 The smoking gun, read further for the explanation.

The more I research the purchase of the 10 new Chevrolet Tahoe's the more suspicious I am getting.

What am I missing here and why has one blog post sparked such an uproar? I have received several phone calls from City staff members , all trying to get me to back off on this story and trying to convince me I am wrong. Their efforts make me think more strongly that I am actually on to something, I am just not sure what yet.

Last week I had requested documents through an FOI request related to the purchase of the 10 Chevrolet Tahoe's. This is what they sent me this morning. Am I really supposed to believe  that a legitimate Chevrolet Dealer would submit a quote with a value of almost half a million dollars written in black sharpie? My sources had told me originally that the cost of the Tahoe's was $43,000 and $48,000 each. That is exactly what the quote shows ….until the "sharpie" marker notations.

I was also told last week by Chief Thody that one of the reasons that Hartford was not buying the less expensive (and extremely popular) Ford Explorer Interceptor was because HPD would have to spend at least eight  hours in driver retraining for anyone  issued an Explorer.

I have spoken to sources from the Connecticut State Police , who operate several hundred of the Ford Explorers and they weren't aware of any specialized driver training. Apparently when they originally switched from Crown Vic's to the Explorer and Taurus, there was initially driver training, but not today. I also contacted several local municipalities operating the Explorers , asking about any special training. One training officer replied that any claims of training requirements was "Nonsense" another Police Official said that claim was "Ridiculous" and no additional training is required other than what officers receive at the Academy during initial training.


Is this Legit? Is this how the City of Hartford does business with a Sharpie marker?

Nothwest Hills Quote Hartford PD Tahoe 2019 (003) by kevinhfd on Scribd
I still stand by my original numbers from my source of $43,000 to $48,000 per Tahoe, and that is not even including the roughly $13,000 for the light package and other upcharges and also a couple thousand more  per vehicle for the 2 way radio.

Mhq Traffic Admin Tahoe by kevinhfd on Scribd
Again, I am not sure why this purchase and my posting has sparked such a furor. Maybe it exposes the incompetence of City purchasing or maybe because it exposes the sense of entitlement that exists among the Command Staff at the Hartford Police Department. It is also somewhat unnerving the extent that HPD will apparently go to in an attempt to expose and identify my sources. This isn't confidential or protected information that I am given. It is public information.

As soon as HPD Command staff members found out that I knew about the purchase they started their witch hunt to figure out how I knew. I am told a Lieutenant met with Laz Parking, the operator of the stash house, I mean Morgan Street Garage, where the Tahoe's were originally tucked away.  Once I  posted the pictures of the Tahoe's lined up on the 5th floor of the Morgan Street Garage, they were immediately moved to an "undisclosed" location. I guess they also analyzed the pics I posted and found my reflection in the chrome grill of one of the Tahoe's.

I guess they haven't heard about or have maybe forgotten about something called our First Amendment rights. I had every right to be there and photographing anything I can see in the public view.

Photo below sent to me from a HPD source. My reflection in the chrome grill. Doesn't HPD have anything better to do? 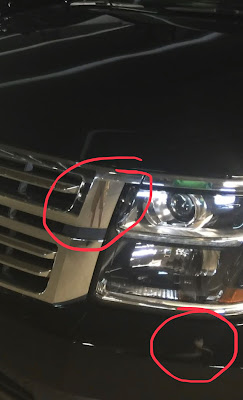 The smoking gun, proof that I was actually there, yes those are my legs and I was wering khaki shorts. I admit it, I confess

I am not sure why. I readily admit I was in a Public Parking Garage where I have every right to be. I was not trespassing or in a posted restricted area

I think eventually I may figure this all out, but in the meantime, something stinks
Posted by KEVIN BROOKMAN at 1:09 PM 15 comments: