AN OFFICER AND A GENTLEMAN 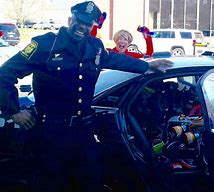 Jim Barrett is a Hartford Police Officer assigned to the area around the Hartford Public Library and City Hall on Main Street. On Monday Barrett was at his assigned area on bike patrol. Barrett heard a radio call for a potentially suicidal male who was threatening to take his life by jumping from a bridge near the riverfront.

With a limited description of the mans clothing, Barrett rode toward the area of Riverfront Plaza. He observed a man matching the description climbing over the rail of the pedestrian bridge over Columbus Boulevard near the Science Center. Barrett reacted quickly and was able to grab the man before he was actually able to jump from the bridge. A short struggle ensued and Officer Barrett, with the assistance of a couple bystanders , was able to restrain the man until medical help arrived.

For anyone that doesn't know Jimmy Barrett, this selfless act was not an anomaly, it is one type of act helping people that he conducts everyday to different degrees.

Barrett is not just a Community Service Officer  for City Hall, he fills a void  by helping people that are down on their luck or just need a little help getting by.

Barrett regularly organizes collections, and distributes footwear , shoes, socks, etc. for the homeless. His City Hall Office some days looks more like the shoe aisle at Walmart than a Police Office. His winter drive also usually has health care professionals available to address foot issues with the people that come in for help.

Officer Barrett is the original "Re-entry Center" at City hall , often helping recently released from incarceration members of the community or others trying to obtain employment with clothing, footwear or even coaching or setting up job interviews. Many times people stop by Officer Barrett's office looking for a snack or something to eat.  Barrett always has snack, energy bars or even canned items like spaghetti-o's that can be eaten on the go

Barrett really understands and takes his oath literally, to serve and protect.

As of the last check, the man threatening to jump was receiving medical attention.

Barrett has also served as a member of the US Army and has been deployed  over seas on several occasions.

If anyone would like to assist Officer Jim Barrett in his efforts, donations are always welcomed and accepted. Officer Barrett's office is located on the ground level of City Hall at the rear doors.