A picture is worth a thousand words. The operator of this vehicle has become HPD's latest DUI arrest tonight on Ann Ucello Street near the Russian Lady. The parking speaks for itself, I am not sure how the DUI tests went 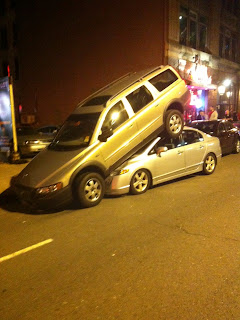 TAKE THE VOTE AND LET'S MOVE ON 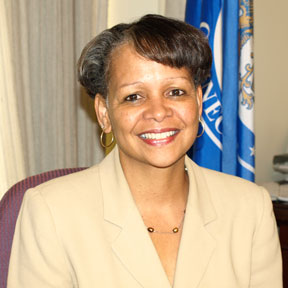 The old saying that "everything works out for the best" could probably  be about to come true in Hartford. Item number 8 on the agenda for Monday nights Council meeting is regarding the appointment of Saundra Kee-Borges as Chief Operating Officer for the City of Hartford. Sources are telling me that the votes on the Council are not there for Kee-Borges's ascension. So be it, take the vote and move on to a real search for a professional to run our City.

Kee-Borges has been Hartford's version of Captain Queeg at the helm of theUSS Caine for the last 10 months. According to Wikipedia Queeg was described as" Queeg is prone to eccentric behavior, From the first, he begins to make mistakes that endanger his ship. After refusing the assistance of his predecessor in command, he grounds the Caine on a muddy shoal his first time underway. He panics in a fog and nearly collides with a battleship, and passes the blame to his helmsman, starting a series of incidents that eventually results in a scripted court-martial "

Our ship, Hartford City Hall , is still stuck on that muddy shoal, and until a new Captains is brought to the helm, we will remain grounded, unable to make any forward progress. I recently had a conversation with Mayor Segarra and in my frustration, explained to him the number one rule of management. As a manager, you are only as good as the people you surround yourself with. In Segarra's case, enough said.

Not everyone realizes when the time comes to call it a day, and in the case of Saundra Kee-Borges, the time has come.Many of the embarrassments currently facing Segarra have been created by his allegiance to his law school classsmate and friend. Loyalties that are definitely misplaced when it comes to protecting the interests of the people of Hartford.

In the case of one of the current issues that will most likely be a big black eye to this Administration , is Kee-Borges's  ignorance of an ordinance on the books preventing retirees from returning as City employees for any period greater than six months. In her capacity as Corporation Counsel should she not be aware of ordinances on the books:? Or at least one of the other attorney's in her office should have been. That's called management.Was it self serving for her to overlook Hartford's municipal code or just ignorance of Hartford's law , either way, we deserve better.

A Chief Operating Officer taking command of the operation she would have or should have had control of City spending on City credit cards before it blew up into a huge embarrassment that may eventually lead to a criminal investigation. And if Kee-Borges couldn't handle the task of proper management, the Finance Director who answers directly to her, is bound by the City Charter to review all transactions to verify their legitimacy. That's called management.

Overtime spending is something that any manager worth their weight tracks almost daily, not when it becomes a huge issue and requires the City Council to step in to put the brakes on. That's called management. And the resolution to the matter, the Council overriding Segarra's veto was a huge hit to Segarra's power, (if he actually had it to begin with)

Kee Borges, in her dual role as Corporation  Counsel and COO also created the SAMA land deal after ignoring Connecticut State law and then ignoring the concerns of Council members  who questioned her judgement and the legality of the issue.This also has the potential to become a criminal investigation drawing the Segarra Administration in because of a lack of management oversight.

Kee-Borges was also apparently responsible for the selection of her Deputy Cprporation Counsel, L. John Van Norden, enough said on that one

I think the final straw for Council members in pulling their support for Kee-Borges was her e-mail regarding the mental stability of Councilman deJesus. Not a smart move, but again, everything works out for the best.

The creation of the previously non-existent Deputy Chief position in the Hartford Fire Department tailor made for her husband/partner/significant other Terry Waller was another move that drew question to Segarra's choices.

Call the vote and let's move on, it is time for this run to come to an end.
Posted by KEVIN BROOKMAN at 2:42 AM 24 comments: