FROM HPD: ANOTHER FELON WITH A GUN 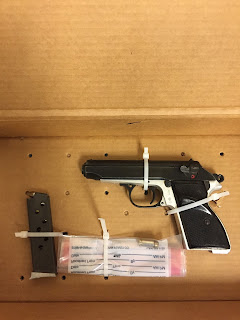 On November 19, 2016 at 1:24am, Hartford Police Department Officers were dispatched to the area of Franklin Avenue and Annawan Street for a 911 report of a person with a firearm. Upon arrival, Officers located a suspect matching the description given by the caller. During the investigation the suspect attempted to elude officers. Officers gave the accused a verbal command to stop, but the accused ran north on Franklin Avenue. Officers caught up to the suspect who ran into a darkened back yard. The officers heard a sound which they immediately recognized as a pistol slide loading a round into a gun. The officers gave verbal commands again to the accused. The Officers then heard something metal being thrown to the ground and the suspect walked to the officers with his hands raised. A canvass of the area located a 9mm TGI pistol with four live rounds inside of it. The accused was then debriefed by STF (Shooting Task Force) detectives. No one was injured during the incident. The accused was then arrested and transported to booking.

The accused is from Bloomfield CT, he is a convicted felon several times over, with 10 previous arrests in Hartford.
Accused: Dunker, Arcenio 6/21/89 27 Forest Ln Bloomfield CT
Charges: Disorderly Conduct (53a-182), Possession of a Pistol Without a Permit (29-35), and Criminal
Possession of a Firearm (53a-217)
Firearm: 9mm TEG
Posted by KEVIN BROOKMAN at 11:13 AM 4 comments:

THE TICKET PROBABLY WOULD HAVE BEEN A LOT CHEAPER 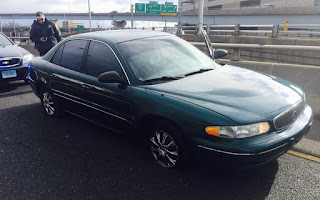 From HPD: Hartford Police Officers deployed  "stop sticks" today to disable a motorist fleeing to avoid a stop belt checkpoint as part of the "Click it or Ticket " campaign.

Instead of an infraction ticket for not wearing a seatbelt, the motorist now faces additional charges as well as the cost of four new tires and tow  charges for having the car towed from the scene.

Not a smart decision to flee from the Police, and a costly one as well.

HPD Traffic Units will be out as part of the Click it or Ticket program this week, so be sure to wear those seatbelts and also stay off the cell phones.
Posted by KEVIN BROOKMAN at 11:05 AM No comments: