AN IRONIC TWIST, HOMICIDE 18 IS ON THE BOOKS 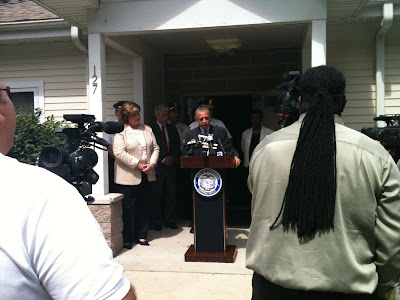 And there also seems to be a much different version of how this task force was created than the one that was delivered to the media today. It seems that the Governor and Chief States Attorney Kevin Kane were the driving force that brought the parties to the table rather than being the brainchild of Segarra. More on this next week.
Posted by KEVIN BROOKMAN at 11:17 PM 12 comments:

IF YOU CAN'T STAND THE HEAT...GET OUT OF THE HPD KITCHEN

Well, some of Hartford's budget problems could be eased by the latest retirement at the Hartford Police Department, Assistant Chief Lester McKoy is calling it quits. Numerous sources have confirmed that McKoy is retiring from HPD. McKoy had also retired from the Stamford Police Department and was collecting a pension from Stamford.

Connecticut State Police are also breathing a sigh of relief knowing that Chief McKoy will no longer be racing to his hairdresser's appointments with the lights and siren blaring on Interstate 91.

Hopefully, Chief McKoy will agree to come back one last time to celebrate the issuance of the Rudewicz report when the report is turned over to the City. A retirement party will most likely be planned with a special showing in HD of the Pawtucket Street video that was withheld from the firearms review board.

UPDATE 4:30PM FRIDAY: These actions are not a retirement by Chief McKoy. According to a source knowledgeable with the specifics, McKoy's position as Assistant Chief will be eliminated as of July 15, 2011. In a letter from Chief Roberts to Mayor Segarra yesterday, the position is apparently being cut to comply with the Council's budget cuts to the HPD budget. On April 18, 2011 the Council attempted to eliminate 2 Command staff positions totalling $300,000 as well as cutting $500,000 from the Police overtime budget ( so much for the Council being serious about Public Safety). One more Command staff position may be cut to reach the $300,000 amount demanded by the Council, but then again, it is not clear if the Council has the authority to slash specific positions. It appears by Charter that they do not have that power.

As the Assistant Chief with the lowest amount of total time at HPD, although he is the longest serving Assistant Chief, McKoy will be the first to be cut when his position is eliminated July 15. Other Command Staff "shake-ups" are to be expected in the next couple weeks also according to the source.
Posted by KEVIN BROOKMAN at 1:14 PM 14 comments:

In what seems to be more and more common each election we face in Hartford, a new Academy Award should be established for best Actor in the "Theatre of the Political Bizarre".

Flanked by the current Mayor, who candidate Wooden had labeled as "pretending to be fiscally responsible" and that Segarra had "forgotten to obey the law" and along side Governor Malloy, Shawn Wooden today gave up and quit the Mayor's race.

But have no fear though, since he gave up running for Mayor, he now wants to throw his full support behind an individual that until about 24 hours ago he wanted us to believe was unfit to lead the City of Hartford. And to further reassure us of his integrity , he wants to be "in a leadership role" and has decided to run for City Council.

Unfortunately for Wooden though, I didn't receive one call from anyone that supported Wooden's decision. Many of the calls were from, up until noon time today, die-hard Wooden supporters. Several of them were also financial supporters who had donated the maximum of $1,000 to Woodens campaign.

The rumors of dirty deals being cut were, and are, running rampant. Many people, myself included, are having a hard time figuring out how you tear someone down for months and try to convince us that Segarra is unfit to be Mayor, and in less than a day you have a sudden epiphany and next thing are standing side by side with your new found love for each other.

How many people would take me seriously if I announced tomorrow that I think Eddie Perez should come back and run for Mayor? I would say very few, and most would think I had lost my mind. That was the feeling I was getting today is that very few people are holding Shawn Wooden real high on the integrity and trust meter.

I am trying to understand Governor Malloy's involvement in this mess though. The Governor explained his long term friendship with Wooden, and I understand the loyalty of friends, it's sometimes hard to find. But I also have to wonder the last time a sitting Governor stepped into a municipal political dogfight. And if anything, Governor Malloy I would think understands the benefit of a hard fought political campaign. He's come through a few himself and I would hope is stronger for it.

Isn't democracy all about letting the voters decide who comes out ahead in the political fight? Holding politicians accountable by forcing them to fight for what they believe in is not a negative thing. Instead, Wooden is like the boxer headed for the ring, afraid to climb over the ropes and get the fight started because he may get a black eye or a bloody nose.

Luckily for Wooden, his big brother Dannel pulled him off the ropes and allowed him a graceful exit from a fight, apparently according to Wooden's polling data, a fight that he couldn't win. But Malloy has been in the ring and realizes the value of the fights, so I don't understand the need to rescue Wooden from one of lifes hard taught lessons.

And why should we now think that Wooden will make a decent Councilperson. Especially if he wasn't willing to fight to save us from the unfit leaders like Pedro Segarra. Is Wooden just a bad judge of character and now realizes he misjudged Segarra? And what reassurance do we have that Wooden just won't roll over and give up when the tough battles need to be waged for what is right for Hartford and its people?

Will he still be afraid of the black eye or the bloody nose from the Council fights and be waiting for Governor Malloy to pull him off the ropes and rescue him from the ring?

I guess it isn't a bad thing to have a friend like the Governor watching your back, but do we want the wimp on the playground to be the one watching out for us as residents of a city in distress? I think we need a few people on the Council that aren't looking for someone to rescue them when the going gets tough, but rather people that are willing to fight to the end for what they believe in.

The video of Wooden's retreat is below for your viewing pleasure, "and the Academy Award for the most bizarre political performance in a less than leading role goes to........Shawn Wooden"

Posted by KEVIN BROOKMAN at 8:19 AM 9 comments:

Numerous sources are confirming that Mayoral candidate Shawn Wooden has given up and is calling it quits in his run for Mayor. Wooden apparently began making calls earlier today to Hartford Democratic Town Committee members and spokespeople to advise them of his decision.

The decision apparently isn't sitting well with some Wooden supporters and donors to Wooden's campaign who thought he was a serious candidate. One donor stated to me that he would have never given a large donation to the Wooden campaign if he thought Wooden wasn't serious about going the distance.

Although it is not yet confirmed, one insider told me that a deal has apparently been cut for Wooden to now run for City Council on Segarra's slate and push for Wooden to become Council President if elected. If that were to happen, Wooden would be next in line for the Mayor's seat if Segarra were to leave for any reason.

It just makes me wonder how you suddenly throw your support behind someone you have been highly critical of for several months and then expect to be taken seriously. More Hartford Democratic politics at its best.

Both Cityline and Jeff Cohen have postings also, click on the links to the right to read their take. And Helen Ubinas had a good column today also, so show her some love and click her also
Posted by KEVIN BROOKMAN at 2:11 PM 3 comments:

IS HARTFORD A CITY WITHOUT RESPECT ?

When you drive around the City, just looking at the condition of many of our neighborhoods, it seems as though we have a hard time respecting each other. To me, throwing trash down is a major sign of disrespect and you need to look no further than some of our main streets to see the abundance of litter.

Our parks have become illegal dumping grounds for not only trash but abandoned vehicles, car parts, boats and just about any other garbage you can think of.

But I'm just wondering if the tone is set and allowed by City Hall. Trash cans placed along the streets are usually overflowing with trash, city properties are poorly maintained, including school properties and parks. This past week I received a call from someone who had family members buried in the city owned Zion Hill Cemetery. They were complaining about the deplorable condition of the cemetery grounds.

I drove through the Zion Hill Cemetery Tuesday afternoon and the conditions were worse than I expected. If we can't even respect the dead, how can we respect ourselves as a City? There is no excuse for conditions like this and the people responsible should be held accountable or replaced by someone that can get the job done. 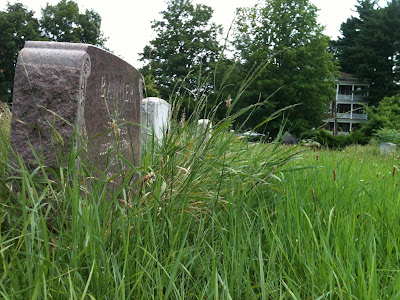 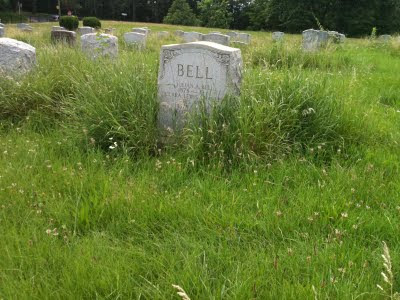