A blog reader asked earlier tonight " I have a question regarding the Hartford Police. In Hartford Courant articles I often see in comments that "Retired Hartford police do not get Medical Insurance". This does not seen possible. Do they mean they don't get 100 percent city paid retiree medical insurance? I'm beginning to think that if a retiree has to pay $200 a month out of their own pocket, people are saying they don't have retiree health insurance. Can someone please clarify?"

Here is the answer to that question in a screenshot a Union member sent me tonight. 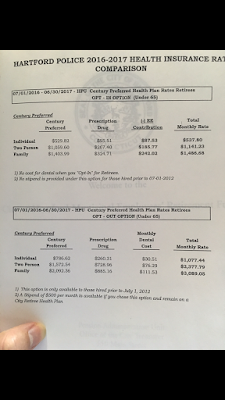 I hope that helps answer your question. By the looks of those rates, I think most HPD retirees would welcome a $200.00 monthly bill.

And thank you to the unnamed blog reader for the info.

And no, the Clinton /Trump feud isn't being revived. That one is still official. This time it is the Hartford Police Union's battle for President.

The race for HPD Union President originally started as a 3 way race between the current Union President  Sgt. Richard Holton, Sgt. Vinnie Benvenuto who is assigned as a Patrol Supervisor, and  Sgt. John Szewczyk who is assigned as a Supervisor in Booking and Detention. Sgt. Holton has since dropped out of the race and replaced by Officer Nick Trigilia.

Sgt. Benvenuto is also a retired NYPD Sergeant, having served 20 years in the Big Apple in various positions and has risen through the ranks in Hartford to become an HPD supervisor. Sgt. Szewczyk  is also a Selectman in Durham. Officer Trigilia serves as an employee member to Hartford's Pension Commission.

What normally doesn't attract a lot of attention, even among their own members, has turned into a heated race with allegations and criticism being hurled from all sides.

Sgt. Holton's 8 page "manifesto" to the HPD Union membership is below. Sgt. Benvenuto has taken to the internet to explain his ideas to the HPD membership. Benvenuto and his slate's  website can be found at bluechange.org

A debate among the candidates was held last night and , according to sources who were in attendance, added to the bizarre nature of the race.

Benvenuto, on his website, promises to reduce his stipend to $16,000 per year and offer a spending savings to the Union's membership. Benvenuto and his entire slate promise to return $41,600  back to the Union coffers in reduced stipends.

IS SOMEONE ACTUALLY LISTENING? BEWARE GUN THUGS IN HARTFORD

Back on December 13th, I posted this on the blog, http://wethepeoplehartford.blogspot.com/2016/12/are-we-serious-about-getting-guns-off.html

Yesterday, the US Attorney's Office and HPD announced a collaborative effort to reduce gun violence in Hartford.

The initiative will be called the Focused Violence Reduction Team and will combine a team effort between Federal Agencies , Federal Prosecutors and HPD. The program was discussed at HPD's Public Compstat last night. The initiative should send a clear message to criminals participating in Violent crimes in Hartford and using firearms.

Federal Prosecutor Mike Gustafson explained that the effort will allow many more tools to be put into the HPD toolbox, among them the use of Federal Grand Juries and wiretap surveillance. Federal prosecutions and sentencing also seem to be more lengthy under Federal prosecutions.

Hartford Police Chief James Rovella also said that having certain HPD Officers "cross-sworn" as Federal agents will also allow gun arrests to be handled immediately in the Federal courts when needed. FBI ,DEA and ATF agents  as well as other Federal resources will be committed to the team to produce results above and beyond the exemplary efforts already achieved by Rovella's own initiative, Hartford's Shooting Task Force

The Office of the Chief States Attorney has also assigned a State prosecutor to the team. That State prosecutor will also be cross sworn to prosecute cases in the Federal system.
Posted by KEVIN BROOKMAN at 5:29 PM 10 comments:

It is a little difficult to think of many Hartford elected officials who have left office in recent history without a cloud of impropriety or corruption surrounding them. Retired Probate Judge Bob Killian is one that immediately comes to mind and as of last week, State Senator Eric Coleman is another. Senator Coleman resigned his position last week to pursue his interest in being appointed a Superior Court Judge by Governor Malloy, Senator Coleman has served the 2nd Senatorial district for almost twenty years. The 2nd District consists of North Hartford and portions of  Bloomfield and Windsor.

Coleman has had an exemplary career at the Capitol and rose to a position of prominence with both his Senate colleagues as well as his constituents. His quiet demeanor as well as his integrity and honesty and strong work ethic will be hard to replace.

A special election will be scheduled roughly 60 days from the time of Coleman's resignation to elect Senator Coleman's successor.  Right now several names are being floated or have expressed an interest in replacing Coleman. Two of the names to be taken seriously are 7th District State Representative Doug McCrory and former Connecticut State Treasurer Joe Suggs. McCrory is a Hartford resident, Joe Suggs is a Bloomfield resident, as is Senator Coleman.

A couple other names I am hearing, and I hope more as a joke rather than any serious campaign are former Hartford Council members Shawn Wooden and Ken Kennedy.It would be a shame to replace a man of integrity like Coleman with someone that doesn't know the meaning of integrity and has no problem with corrupt activities.

Hartford Treasurer Adam Cloud was apparently also considering a run but reportedly has decided against it..
Posted by KEVIN BROOKMAN at 8:31 PM 12 comments:

FROM HPD, HOMICIDE NUMBER 2 IN ONE WEEK

"On January 08, 2017, at 2245 hours, patrol units responded to the area of 72-74 Stonington Street for a shotspotter activation of one round. While en route, officers were advised by dispatch that a male suffering from a gunshot wound was transported to Hartford Hospital via private vehicle. The victim succumbed to his injuries (a single GSW in the head) and was pronounced deceased at 11pm. A crime scene was established in the rear parking lot of 50-52 Lisbon Street. The Major Crimes and Crime Scene divisions responded and assumed the ongoing investigation.

Anyone with information is asked to call the Hartford Police Department 860-757-4316 and anonymous tips can be left at the HPD websitehttp://www.hartford.gov/Police “Submit A Tip”

According to sources, the disagreement may have started over a parking space
Posted by KEVIN BROOKMAN at 10:13 AM 18 comments: