HE IS MAKING A LIST AND CHECKING IT TWICE 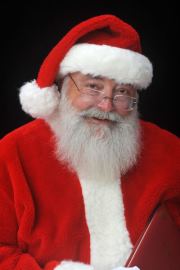 When I moved back to Hartford years ago. one of the first people I met when I started to get involved in the community was the person in the picture above. Dave Carrier and his wife Val had also moved back to Hartford about the same time to purchase a "perfect six" building that was being renovated into a two family, owner occupied home.

Many of you might recognize Dave who is quite often out in the community a various events without the red hat and coat. The white beard is real though and I am sure it turns the heads of many young children year round as they see "Santa Dave" out in public accompanied by his wife Val, no reindeer though , he usually  saves them for one night a year.

If you are organizing a Christmas event, Dave just might be the perfect addition to set the right spirit.

Santa Dave will be visiting all those in attendance at the Maple Avenue NRZ Holiday meet and greet on December 13, 2012, at 7:00PM. The event starts at 6:00PM at St. Augustine's Church and is open to the public, Attendees are asked to bring a non-perishable food item for the St. Augustine Food Bank or a health care item to be donated to the South Park Inn's homeless shelter.

If you would like to inquire about Santa Dave's services, check out hartfordsanta.com or http://www.facebook.com/SantaDaveCarrier

Hartford Fire Department Deputy Chief of Training Dan Nolan, who was wrongfully terminated by a corrupt mayor, will once again be wearing a Hartford Fire department uniform and badge as of Monday. The City of Hartford is under a court order to return Nolan to his previous rank and status as a result of extensive hearings into his wrongful termination.

Nolan was terminated in 2008 by our felonious Mayor at the time Eddie A. Perez, a move that was carried out by former Fire Chief Charles Teale. Evidence testified to under oath at Nolan's hearing portrayed a less than stellar picture of the former Chief, including his own testimony that he took payoffs from a local opthamologist during a period of controversy when Teale was renting out Hartford Fire Department Training Facilities and collecting the payments personally also..

You can read more about that here

Nolan has now also filed a lawsuit against the City of Hartford for his wrongful termination. In a somewhat unusual move, Nolan is also filing personally against retired Chief Teale for his alleged
"malicious actions". It might just be about time that these Department heads that make these sometimes vindictive or malicious decisions  decisions start to feel it in their own checkbooks, not just at the taxpayers expense.

Numerous decisions involving terminations that have been overturned by the Courts might have started out differently if the powers to be knew that heir own homes or bankbooks could be tapped in these lawsuits. How much did Secore, Murtha and now Nolan cost the taxpayers of Hartford in legal fees , only to be reversed by Judges?

To read transcripts and other documents as to how the Nolan case evolved,just type Nolan in the search box above and you will find numerous stories. It is definitely an interesting story as to how the Union played both sides of the fence initially in complaining to former COO Lee Erdman based upon  an "anonymous" complaint from a non-union member recruit and then claiming that they were supportive of "Brother Nolan".

I guess that is what they call Karma, and in the end, good usually wins out over evil.

I will post the full content of the lawsuit and complaint here Monday
Posted by KEVIN BROOKMAN at 6:24 PM 19 comments:

Hartford's Police Chief James Rovella today announced the promotion of two HPD Captains and three Lieutenants to the rank of Deputy Chief. Rovella will be promoting Captains Joseph Buyak and William Long and Lieutenants Neville Brooks, Luis Rodriguez and Emory Hightower to Deputy Chief. The promotions will take place Friday , November 30, 2012 in a ceremony at 2:00PM at City Hall,

Four police officers will also be promoted to the rank of sergeant during the ceremony.
Posted by KEVIN BROOKMAN at 5:14 PM No comments:

HAPPY THANKSGIVING TO YOU AND YOUR FAMILIES

Posted by KEVIN BROOKMAN at 11:57 AM No comments:

KEEP IT IN PERSPECTIVE

A lot has been said in the comments the last few days and the harm they face and the necessity for competent, qualified leaders to guide firefighters in their tasks. I think the last thing any of us want to see is a police officer or firefighter injured as they perform their duties to protect us, especially by less than competent supervision. When you have a free moment try to keep them in your thoughts and that they will be kept safe from harm, whatever the cause, 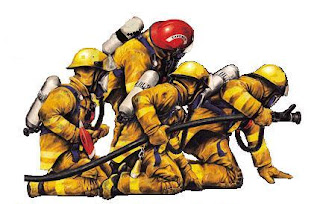 And if according to your will
I have to lose my life
bless with your protecting hand
my children and my wife.
Posted by KEVIN BROOKMAN at 6:04 PM 6 comments: