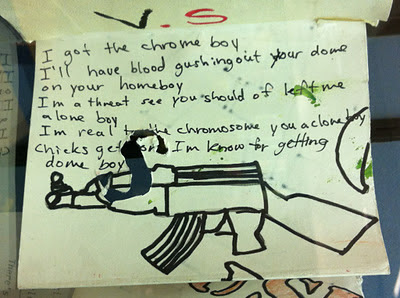 The drawing above is currently on display at Hartford Public High School as part of an "art exhibit".

Just the fact this is what a student is drawing along with its written message , I would hope is raising red flags all over the place, but apparently it isn't. Is anyone requesting any type of counseling for this obviously troubled student?

"I'll have blood gushing out your dome boy on your homeboy" doesn't seem like a normal thought for a high school student, yet the drawing is on display showing an assault rifle and the troubling message.

Is anyone paying attention in our schools or is this threatening behavior acceptable?
Posted by KEVIN BROOKMAN at 7:27 PM 9 comments:

If you are interested in seeing first hand how Hartford politics work, the HDTC will be meeting tonight at 6:30PM in the Function Room at Hartford City Hall.

If you want to see democracy at its finest, or maybe its worse, stop by and see what goes on.

After a short time watching the process, you will probably be convinced to vote Independent on November 8th. It promises to be a lively night.
Posted by KEVIN BROOKMAN at 1:53 PM 10 comments:

WE NEED VISION AND FRESH IDEAS

One thing I have found while campaigning for Hartford City Council is that we have a lot of "politicians" that are good at identifying Hartford's problems. The problem with that though is that the solutions to our problems, for the most part, seem to be in short supply. At the candidates forums I keep hearing the catch phrases for Hartford's troubles... "crime and public safety", "economic development", "education" and "jobs".

This may sound self-serving, but we have plenty of "politicians" capable of identifying problems, what we need are leaders to come up with solutions to those problems.

Back in July, I posted here on the blog one of my plans to spur economic development, you can read that posting here.The idea now seems to be gaining some traction. It is only part of the puzzle to turning Hartford around, but I guess others beside just myself see the possibilities

Last Thursday, former Councilperson and now State Representative Matt Ritter called me regarding the plan. I guess Matt sees the merits in the idea and he wanted to let me know he was interested in moving the idea forward. He was meeting with the Metro Hartford Alliance and wanted to gauge their support and he apparently plans to move it forward in next years legislative session..

Ironically, that same afternoon I met with the editorial board of the Hartford Courant and laid out my thoughts to them also. Tom Condon posted an editorial on line tonight which I would imagine will be in the print edition tomorrow. Unfortunately the message of the editorial is about another Hartford business closing its doors in large part because of Hartford's tax burden on its small businesses.

In the editorial, Tom Condon mentions my plan as an idea "worth exploring". It's not the solution to everything, but it is a start.

Here's what Tom wrote; "A way must be found to entice small businesses back to the city. Blogger and city council candidate Kevin Brookman has an idea, one that state Rep. Matthew Ritter has picked up on, that is worth exploring. It is to offer the region's average tax rate to any business that will locate or expand in Hartford. So say the region's average is 35 mills. That's what the business would pay in Hartford, for some period of time."

We need the vision and the ideas for possible solutions, just identifying the problems doesn't change anything.

IS DKR'S INNER FIREFIGHTER COMING OUT 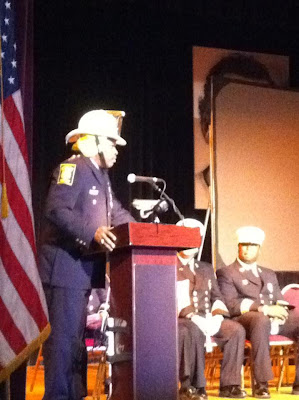 Yes that is Hartford Police Chief Daryl K. Roberts in the picture above wearing the fire helmet.

According to a few people in attendance, Chief Roberts addressed the recruits stating that "inside every police officer is a firefighter waiting to come out". Could this be the beginning of a new career? Is Chief Roberts internal firefighter "coming out"?
Posted by KEVIN BROOKMAN at 5:31 PM 29 comments:

REPOSTED FROM E-MAIL MESSAGE FROM WECA


The West End Civic Association will hold a Candidates' Forum on Tuesday, October 18 at the United Methodist Church in Hartford (located at the corner of Farmington Ave and South Whitney St) at 7 p.m.

Candidates for the City Council, Mayor and Treasurer will attend.


Please join us. A candidates' forum allows candidates for public office to express their views openly so audience members can understand their positions and make informed voting choices. The forum allows you an opportunity to become better informed about your choices for elected representative.