Bushmaster 90839 E2S M4A3 MOE Mid-Length Rifle 5.56mm 16in 30rd Dark Earth
I am sure that the debate over the second amendment will become heated over the next few months.

The 2nd amendment to our Constitution reads as follows: A well regulated Militia, being necessary to the security of a free State, the right of the people to keep and bear Arms, shall not be infringed.

What did our founding fathers have in mind? Did they ever envision Bushmaster rifles with 30 round clips and ammunition that is so devastating to human tissue, it would cause almost certain death when used, especially when used against a 6 year old child?

Is it time to return to what our founding fathers had in mind for self protection and allow Americans to own single shot muskets and black powder pistols? There is no place in any American home for a Bushmaster Assault rifle and as with most laws it is about the "intent" of the legislation and typically not the convoluted extreme result that many times occurs when extremists push the wording to the limit.

It also comes down to personal responsibility. It is extremely troubling to hear about a mentally disturbed individual  who was able to essentially shoplift assault rifles from an East Windsor gun store this past weekend. Were these weapons left around with the same level of security as DVD's at Walmart?

Shouldn't a responsible gun shop have these weapons properly secured in locked cases or at least some sort of cable run through them so that a crazed individual can't walk out with ammunition and an assault rifle in hand to wreak havoc on another town?Severe penalties should be invoked for any person that carelessly allows weapons to get into the wrong hands.

Something needs to change, this wasn't what or forefathers intended.The weapon pictured above has no place in any home
Posted by KEVIN BROOKMAN at 8:33 PM 20 comments: 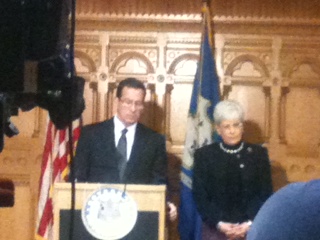 Yesterday I had the opportunity to spend a couple moments with Governor Malloy as he returned to his Capitol Office from Newtown.  He was definitely not his usual upbeat personality, and his signature green necktie had been replaced by a black tie of mourning. I thanked both the Governor and the Lt Governor for the way they were handling the Newtown massacre with sincerity and genuineness. No politics, no grandstanding.

I think anyone can be a politician, but there are not a lot of politicians that can step up and be real leaders during a time of crisis. It is easy as a politician to search out the closest television camera crew or make sure that your photo is taken for face book as you lay down a bouquet of flowers at a memorial. That's what politicians do.

Leaders do what needs to be done, and I think they do it more out of instinct rather than through any previous training. I don't think anyone could have prepared Governor Malloy for the task of having to tell 20 parents that there children were lying dead in the corner of a classroom, shot multiple times.

The morning new shows this morning were running stories that apparently claims were being made that family members of victims were possibly upset that Governor Malloy  was "insensitive" in the way he notified them that their loved ones were dead. I'm just wondering how you can possibly be more sensitive in notifying a family that their 6 year old child was dead?

No politician ever runs for office expecting to have to undertake the task of sensitively explaining the actions of a madman with an assault rifle killing innocent children. And I would venture to say that very few of our politicians are up to the task of doing it.

As Governor Malloy explained yesterday at a Capitol  press conference, if he had adhered to the "normal " process, it could have taken days for the official word and list of the deceased. Malloy felt that was wrong and expedited the process to give all parents  official word of the news that no parent wanted to receive as quickly as possible. To do otherwise "would  be wrong" according to the Governor as tears streamed down his cheeks and his voice  not coming easily.

The Governor, with Lt Governor Wyman by his side, has faced a couple months of tragedy that has been unprecedented in decades in our State. Hurricane Sandy's devastation by Mother nature and the Sandy Creek devastation by another human being.

No matter what your political views or political affiliation you have to admit these are difficult times that no elected official looks forward to having to deal with, the evaluation of their leadership is how they respond. You can visibly see the toll these actions take on Malloy and Wyman and I for one am very appreciative of their actions.

I can only think back to my time in High School when our Governor Thomas Meskill was out of state on vacation skiing while much of the State was without power after Ice Storm Felix and then the other story of Ella Grasso getting out of her limo and walking to the Capitol during a blizzard to lead our state during a crisis.

Leadership takes all forms, and I am glad we have this Governor on the 2nd floor at times like this
Posted by KEVIN BROOKMAN at 8:08 PM 1 comment: