IF YOU WERE GOING BROKE, WOULD YOU TAKE A TRIP TO FLORIDA ? 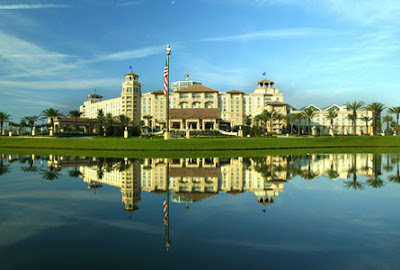 PICTURE ABOVE OF THE GAYLORD PALMS HOTEL, THIS WEEKS HOME FOR PEREZ CHIEF OF STAFF SUSAN McMULLEN AT THE TAXPAYERS EXPENSE

Apparently those in the Mayor's Office at City Hall would answer yes to the above question.

As Hartford faces one of the toughest financial years in its history, Perez Chief of Staff Susan McMullen and at least 12 other city staffers have jetted to Florida for "off site training". From what several sources are telling me, McMullen along with Budget Director Rick Galarza, Tax Collector Marc Nelson, MHIS Director Eric Jackson, Deputy Finance Director Christian Johnson and others are spending several days in Florida, all expenses paid by the taxpayers of the City of Hartford. The "off site training" is apparently regarding the "Munis" software, Hartford's in house software program. The entourage flew to Orlando on Sunday and is staying at the Gaylord Palms Hotel , pictured above. The cost for the classes are listed as $624.00 per person. No total cost estimates for the trips are available at this time, but early estimates are that it would most likely cover the salary of at least one of the employees Perez laid off to balance the budget.

Hopefully Hartford's unions will consider more givebacks in the near future so that McMullen can take a winter vacation at the expense of Hartford taxpayers also . For anyone wishing to welcome the entourage back, they arrive at Bradley at 8PM tonight on Southwest Airlines
Posted by KEVIN BROOKMAN at 11:11 AM

That's just plain nuts. Most of the people on the list are suits. Decision makes yes, but certainly not Munis administrators. Even then, what's the CIO doing in the group? He's a user at best.

Would not not be possible to Munis, who are just located in Maine, to send a trainer for 3 days?

Something else not related to Munis. Actually a funny joke. When people came to work today Munis was down. Maybe the folks in Orlando were necessary.

So back to the original story...I have been noticing for more than a year that MHIS has not distributed cell phone bills to school or city employees. These many of thousands of dollars could be used for all sorts of educational expenses. The twist is that apparently by not having employees pay for the personal calls and internet usage, the city is obligated to determine the amount of personal usage and report this as employee income on the W2's.

Maybe this will get the city to move on this.nesoca

Cell phone and internet usage do not have to be reported as income as by the City and is not reportable on the W2. It is the obligation of the employee to determine the amount of personal usage and report it on line 21 of the 1040 form.