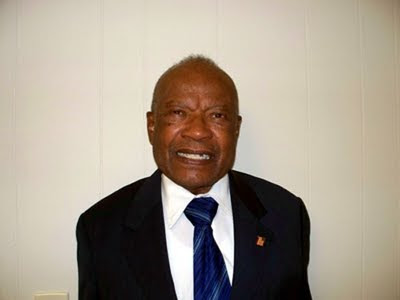 Pictured above, Abe Giles' mugshot after his arrest on corruption charges along with Hartford Mayor Perez. According to the brochure below, he is now handling US Census Bureau jobs.

The attached PDF file below was given to me this morning. Apparently it is a US Census Bureau form that has been altered to appear that the 5th District Democratic Town Committee has some sort of control over providing US Census Bureau jobs.

Apparently the allegations of Democratic Registrar of Voters Olga Vazquez altering state voter petitions wasn't enough. They must want to also now invite federal scrutiny as they appear to have altered federal documents.

The US Census bureau was extremely interested in seeing the document when I called for their comment. I e-mailed the PDF file to them and as soon as I get their comment I will update it here.

One member of the 5th district challenge slate, the so called "Kirkley-Bey" slate, was very concerned by the use of the brochure for political purposes. Rebecca Wareing commented that "It shows a potential lack of respect for our people". She further stated she was concerned that a federal agency who is non-partisan and a form designed and paid for by taxpayer funds, was being used for political purposes.

According to sources, Democratic Town Committee Chairperson Sean Arena had tried to get the brochure cleared through the US Census Bureau approximately two weeks ago and was told that the usage would be illegal, apparently in true Hartford fashion, they went ahead and did it anyway.

More to come on this, another interesting twist in Hartford's questionable political landscape. The original US Census Bureau brochure, provided by the Bureau is below, as well as the altered form


THIS IS THE ALTERED 5TH DISTRICT BROCHURE

Census Brochure What Happens Next
Posted by KEVIN BROOKMAN at 8:34 AM

The next move is that Mayor Perez will appoint Abe as the head of the Hartford Census group.....for money of course...

no olga what did she come to her CENSUS or did she finally drop out & named abe as a replacement when will the feds move in & by the way is abe still looking for letters for court???

Olga was too busy forging signatures on her petition forms in the back room of the registrars office. I will assure you this little escapade by Team Giles will draw the attention of the Feds.

Kevin - I am a first timer on your blog, and let me commend you for staying on top of what's "REALLY" going in the City of Hartford.

I watched you tonight (2/6) tonight with Stan and Gerry. Regarding the comments by the group about "why isn't anyone" calling out the players at City Hall concerning the corruption going on in the Registrar's office, may I suggest that you guys contact 60 Minutes or Dateline, since Secretary of the State and Attorney General don't seem to want to get involved.

Sometimes, We the People, have to resort to extreme measures to affect change! Just a thought.

Again, thanks for keeping it real.