PEREZ TRIAL: BE CAREFUL WHAT YOU ASK FOR MAYOR 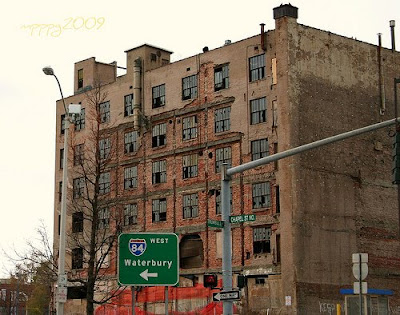 The Perez corruption trial finished off another week today. Tomorrow is a furlough day and the court is closed and Judge Dewey gave jurors Tuesday off so trial resumes on Wednesday at 9:30am.

Today's main witness was developer Joseph Citino who was stonewalled in his attempts to demolish and then develop the property that was part of the area surrounding the "Butt Ugly" building. Citino claims to have been in a meeting regarding his plans in which Mayor Perez was present.

I had anticipated a character out of the "Soprano's" to take the witness stand, but instead a professional gentleman was sworn in. Joseph Citino had to repeatedly be asked to speak up as the jury and the defense table could not hear his soft spoken voice.

It was during that meeting apparently when Perez insisted on a $100,000 "payment" to Abe Giles if Citino was going to be able to purchase of land abutting the "Butt Ugly" building, a property that Citino claims was key to the success of his plan.

Citino testified that during that meeting Perez told him if he wanted to move forward that he would have to "take care of Abe". When Citino asked Mayor Perez what the next step was Perez replied "First we have to take care of Abe Giles, or there is no next step".

It seemed that one of the main issues regarding Citino's testimony was his criminal past. With the jury out of the room both sides argued over how much of Citino's criminal history could be disclosed to the jurors. The whole issue seemed to become a minor issue when Prosecutor Gailor began his questioning and quickly went into Citino's past.

Citino seemed to be one of the better witnesses so far as to how he connected with the jury. Citino made it a point to speak directly to the jury making eye contact with them rather than the lawyers. He did have a tendency to answer more than the question that he was asked, but my impression is that the jurors were listening.

Citino's past arrests were from the late 80's and early 90's and involved drug, weapon and counterfeiting charges, for which he served prison time. He testified that he had made mistakes, but since then he told the jurors he had worked steadily to avoid ever going back to prison. Although in and of itself his past seemed damaging, Gailor did a masterful job of diverting attention away from the past and focusing the jurors attention on the hundreds of properties Citino claims to have developed since he started his company.

I think Hubie Santos realized that any hope he had of making Citino out to be a gun toting thug and drug dealer was lost when the jury heard about Citino's million dollar plus construction deals. He only touched briefly on Citino's past during his cross examination and moved past it quickly to focus on the Courant's treatment of Citino.

From day one of jury selection, the courtroom has buzzed over the constant mention of Courant reporter Jeff Cohen. Many people were wondering why Hubie Santos has insisted on mentioning Cohen and why would he be a potential witness?

Apparently, according to Santos, Citino had been called repeatedly by Cohen for a comment on a story regarding the alleged payoff to Giles. Citino remained steadfast and repeatedly told Cohen "no comment". Citino testified that Cohen had probably called him 100 times looking for a comment.

During the time Cohen was working on the story, Citino sent an e-mail to Perez outlining his understanding of where the deal stood. In that e-mail Citino referenced the "$100,000" payment to Giles. Citino testified that on the day the e-mail was sent at 10:54am, Perez began calling him almost immediately and he claimed (verified by phone records) that Perez called him 18 to 20 times trying to reach him.

They had a short conversation, most of which Citino "didn't recall". Several days later Perez called him upset because he had put the $100,000 payoff to Giles in writing. According to Citino, Perez was not happy because the e-mail and the payoff could be "trouble" if it got into the "wrong hands".

Then in the "be careful what you ask for" column, Perez reacted to a Courant story by Cohen. After the issue with "taking care of Abe" was published in the Courant, Perez turned around and sent a letter to States Attorney Kevin Kane requesting a full investigation into the payoff and any corrupt activity. Eddie must have thought that the attention would be focused on the convicted felon Citino and the spotlight would never be on him.

Well, as Inspector Sullivan testified, that plan didn't work for Perez and almost immediately after they first interviewed Eddie, he became a suspect.

One of the more peculiar pieces of information was brought out during Santos's cross examination when he tried to paint a picture of Cohen "threatening" Citino to get Citino to comment for his story. Citino seemed to not consider Cohen's actions a "threat", but Santos kept asking about Cohen "threatening" him. Apparently Cohen asked for comment and Citino kept saying "no comment" and Cohen related to him that he probably wouldn't be portrayed in a positive light if he chose not to comment. Cohen apparently advised Citino that his criminal past would be brought out in the article.

For some reason Santos also pressed Citino regarding a phone call from Cohen after the article was published. Santos claimed that Cohen called Citino from New Orleans where Cohen was visiting his parents after Hurricane Katrina. I wanted to stand up and object, "Relevance your honor?". But the Judge seemed upset enough already after spectator Jan Appelloff's cell phone went off followed by Hubie Santos's phone going off for the second time of the day. "Sorry your honor, its my son" was Hubie's response, Appelloff quickly exited the courtroom to silence hers.

A quick admonishment by Judge Dewey for everyone to turn their phones off. An early recess for the long weekend was called and testimony resumes next Wednesday.

And for those in attendance wondering about my being summoned to the "backroom" during the afternoon recess, I will remain silent on that one until the time is right.
Posted by KEVIN BROOKMAN at 7:34 PM

Eddie thought he was gonna be able to play with the big boys b/c he did the Learning Corridor project. LOL that he called the state on Citino and it backfired on him. Does anyone wonder why Palmieri up & quit??? Check out the affidavits on the bribery charge. He didn't feel like workin' for another Cianci, especially an amateur like Eddie. Kevin, I like your picture of the Butt ugly building; it has the highway sign showing "Waterbury". How appropos. However, I don't like your Sopranos comment. Not all Italians are gangsters. I'm sure you don't like any derogatory Irish references.

Maybe Eddie can follow Citino's example of an ex-con who admits guilt, serves time, and then goes on to do good development projects. I guess that's what Rowland is try'in to do in Waterbury...

I would sooooooooooooo like to know who tipped Cohen off, but I guess that journalists must protect their sources. Can a journalist be compelled by a court to divulge the source??? My guess is that it was someone in Development Services, probably not the Mayor's office.

Does the fact that they're going into the Abe Giles charges mean that the Costa part of the trial is done?

The Costa part is largely done.

The 3 main witnesses to me are Costa,Sullivan and Citino..Costa and Sullivan were good for the prosecution and if Hubie cant lay a glove on Citino on Wedsday..it is lights out for Perez.

I was quite nervous yesterday when Helen U. was saying Citino was unravelling and mentioned Eddie telling him he didn't have to make the payment. She left out the context -- that Eddie backed off the payment request when the Courant broke the story about it. So the pattern continues -- Eddie does the right thing only when caught.

Not following through on the deal after you get caught means nothing.

It's like robbing a bank and giving back the money you stole when you see the cops pulling in the driveway with an arrest warrant, it doesn't negate the original crime.

And to Joe, your point that not all Italians are gangsters is true, and I didn't make a negative comment about Italian's, but anyone who watched the Soprano's I think gets the point, just trying to say Citino was not what I expected. As far as negative Irish references, I hear them all the time, but they are hardly ever menat in a hurtful manner. How many people still call a police prisoner transport van a "Paddy Wagon", that was a negative term directed at the Irish or that beer and drunkenness represents Saint Patrick's Day.

I get your point, but I also think we have gone over the top with the "sensitivity" and political correctness. The thought of slandering Italians never entered my mind when I wrote that, and in all honesty I never thought of Tony Soprano as an italian, but more so as a mobster, which I don't think italian's have a monopoly on.

Citino's testimony is so far the most incriminating. It's been alot of he said/she said, but thus far the e-mail is the closest thing to a smoking gun . Also Atty. Santos actually said that the 100K fee was justifiable because of the $2250 a month Abe made subleasing the lot to LAZ Parking. That was Hubey's first big mistake of the trial.

To bad Perez tried to put the attention elsewhere, the facts still remain that Perez takes care of everyone to benifit himself doesn't seem to be a leader for the City, seems more like what he can get for himself. Is the fact that he was an ex gang member ever going to play a part in how trustworthy Perez himself is. And whats up with Blumenthal and the Courant standing behind Perez, are they ashamed to admit they made a mistake endorsing Perez, seems like alot of people were convicted for much less than what Perez is on trial for.

The Courant has repeatedly called for Perez to step down, and was the paper that broke the Citino story to start with. Not sure that qualifies as "standing behind him." As for their endorsement of him ... do we seriously believe anyone voted for Perez based on that? Do the people of Hartford sit around going, "I just don't know who to vote for, if only the Courant's editors would make the decision for me." Please.

Seems a pattern of bad drivers Perez's driver and Crash Jackson, Where does the City find these people?