ROBLES IAD HEARING SHOULD BE UNDERWAY 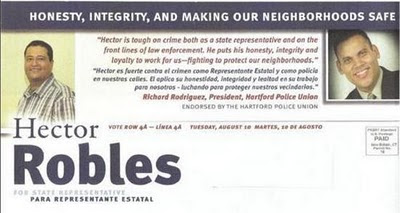 The departmental hearing for the charges against Hartford Police Officer Hector Robles was scheduled for this morning at 9:00AM. According to police sources the hearing will be held "as scheduled" and is most likely underway at this time.

If the charges are upheld, the possible outcome will most likely be termination of Officer Robles as was recommended by the Department Advocate, Lieutenant James Bernier when the report was released on August 11, 2010.

Law enforcement sources have also confirmed that the entire report and the allegations it contained are now in the hands of the Office of the Chief States Attorney. The allegations are actively being investigated by Inspectors assigned to the case for potential criminal charges against Robles. The scope of the investigation may not be limited to Officer Robles according to police sources.

To read the original posting regarding the IAD investigation click here
Posted by KEVIN BROOKMAN at 11:36 AM

Here's how HPD should do this.

Here's how HPD will do this

I agree that these actions are not always well thought out, but consider that many of the decisions were made under the guidance of John Rose.

I disagree with any comparison between Robles and the cases of Murtha and Lawlor and even Secore for that matter.

Robles's actions did not involve action he took in his official capacity, such as an on-duty shooting, but rather involved clear cut allegations of Larceny and falsifying documents and records. Murtha and Lawlor were charged after they made judgement calls in their official capacity as Police Officers. Robles allegedly set out to defraud the system and I would think in the eyes of the public as far as their trust of the Police Department, Robles's actions clearly undermine that trust.

I agree Kevin but why chance it. No one expected Murtha to win based on the video footage of the shooting, yet he did. Also keep in mind Robles' IAD comments can't be used in criminal court.

I don't expect him to beat this and I think he will be out of a job in the end but HPD (the city) should play their cards smart and work him out the door in a logical order that minimizes the risk of a law suit. They have a long history of terminating people the wrong way costing the tax payers lots of money.

Robles's IAD statements can't be used under his Garrity rights, but anything he states on the record at his hearing today can be used , as it has been explained to me. From what I understand the Inspectors from the States Attorneys Offices have already begun the process of re-creating and verifying everything that was in the report so that their investigation and potential arrest warrants will be independent of the IAD investigation so as to not breach Robles's Garrity rights.

I don't have your understanding of the bureaucratic proceedings applicable in this sort of(government/union) situation. Common sense would indicate to me that if an employer discovers, has what he considers adequate evidence, that an employee is defrauding him, it should be in his discretion to fire. Possible subsequent acquital in criminal proceedings not relevant.
I have sympathy with the cops investigated for mal-shooting. But, I guess I'd apply the same principle as above. If the employer (police dept.) finds evidence that the cop screwed up on the job firing should be within its discretion. And, in fact, in those cases, unless there is evidence showing malice, deliberate malfeasance, I'd say that firing is the worst that should happen.

Peter Brush Said:
"I don't have your understanding of the bureaucratic proceedings applicable in this sort of(government/union) situation..."

You don't have to know the specifics.

You can rest assured that it will not be anything sensible or in the interest of the tax payer.

It will be something along covering up crime, rewarding your friends and punishing your enemies at the expense of the tax payer regardless of the facts.

I bet you what Robles has done is quite common at the City and like you said in another post
"It is not just Hartford".

Peter, I understand what you mean about how an employer should be able to terminate someone but unfortunately in our severely litigious country if Robles gets a dismissal on a technicality or is found not guilty by a jury then on what grounds was he terminated for? If that long shot should happen he will sue the city and win his job back as well as legal fees.

Like anonymous at 2:50 said. This will not likely be handled in a way that makes legal and financial sense. It will be about making deals, burning enemies and protecting friends.

Peter, I understand what you mean about how an employer should be able to terminate someone but unfortunately in our severely litigious country if Robles gets a dismissal on a technicality or is found not guilty by a jury then on what grounds was he terminated for?
-----------------------------------
Proof of crime should obviously not be required for an employer to fire an employee. Violation of company rules, which should presumably include one against fraud, should be enough for firing. It would appear that the police dept. has developed evidence sufficient to show that Robles was double-dipping. Whether the evidence is admissible in a criminal trial or sufficient to convict not pertinent.

Peter, that's not how it works.

If an employer fires an employee for something they allegedly did and a jury says the are not guilty of said alligations then they are getting their job's back and winning legal damages. Happens all the time all across the country.

Many employers just fire an employee and seek no criminal prosecution even if their actions were criminal in nature for this very reason.

Friends of the administration have been getting away with these PJ/overtime games for years. Robles is the one who will pay the price, because he is not in the cool club. Thats how things work there. If you are a friend of the top dog, you get away with wrecking a couple of cruisers, violating department policy ect... with little of no investigation. But if you are an outcast, you will pay dearly for every little thing. Cover up for friends, crush the outcasts, its good old boys club 101. Its sad.

Agreed. Just compare the recent changes to Kevin's "hit list". Only the people "perceived" as friendly to Eddie got removed. The rest is still business as usual.