SENDING A MESSAGE AND MAKING A DIFFERENCE 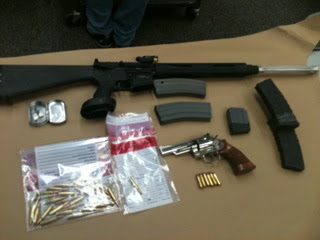 The photo above is a sample of the weapons seized today by Hartford's shooting taskforce. Note the double clip taped together to double the capacity of the rifle

It seems like, and the numbers seemed to reinforce it, that for the first six months of this year Hartford's streets were run by thugs who had no fear of being held accountable for their actions. Fortunately, now a message is being sent that there is a new Sheriff in town and his name is Dannel Malloy. A drastic turn about in Hartford's gun crimes is taking place after Governor Malloy reached his boiling point and States Attorney Kevin Kane moved ahead with the Shooting Task force that is now bringing order back to Hartford's streets.

I don't have a lot of details yet but one source from HPD has told me that the shooting incidents and gun violence has been reduced 75% since the taskforce was pulled together. It isn't just the fact that they are running top notch investigations, they are sending a strong message to the street thugs.

Hartford Police, and most east coast law enforcement agencies, have a strict "no pursuit" policy. For some reason, the west coast doesn't seem to have such policies and usually pursuits in the west are media spectacles broadcast live via helicopter cameras.

In Hartford, it sends a dangerous message to criminals across the city... hit the gas and flee and you are safe until the next time you are chased and then repeat the above and flee once again. In the mean time, the thugs and their guns remain on the streets to commit more crimes. I do not necessarily condone police chases for motor vehicle charges, but there is a time to pursue and get the guns and the shooters off our streets.

In many cases before the facts are even in, a gun shy (no pun intended) supervisor is screaming over the radio "break it off, break it off" to the pursuing officer. Again, it sends a message to our fleeing felons that escape is almost inevitable unless you crash, or as was the case last week, you drive into a construction zone on Granby Street with no way out. No one said the criminals are bright, they just know how to pull a trigger.

Hopefully I can post more on the work of the taskforce in the future, but in the meantime the investigations are meticulous. They are really working as a team effort and bringing various resources to the table. They are identifying their targets , gathering information and building strong cases that are leading to arrest warrants for some of Hartford's most violent criminals.

And when the thugs try fleeing from the police now, there is no one yelling "break it off". The stop sticks are ready, the vehicles are tracked and hitting the gas does not ensure their escape from prosecution. Another suspect was caught today at Main and Nelson Streets after he decided the gas pedal was the way out, it wasn't.

HPD didn't back off and the suspect was caught after a brief foot chase. They must wonder what has changed now when they hit the gas in their rental cars and still see the flashing red and blue lights staying on their tails as they run.

It is sending the message that the "free for all, anything goes" days of the first half of 2011 are quickly coming to an end, Hartford's neighborhoods are being taken back by the hard work of the shooting task force combined with the other HPD officers on the streets doing their jobs and knowing the players in their areas.

I'm not sure why it took the Governor and Kevin Kane to start producing results for Hartford, but at least someone stepped up, showed some leadership and we are now seeing the results from Hartford's law enforcement officials and the Shooting Taskforce.
Posted by KEVIN BROOKMAN at 8:20 PM

This is GREAT news! Now it's time for the Judge's to do their job. maybe the Gov should re-think closing prisons.
If people want to act like wild animals, put them in cages.

I agree 100%, it would be time consuming, but it would be interesting to see how many convicted felons arrested with guns are kicked back onto Hartford's streets almost immediately with no accountability. They are not carrying these guns as felons with legal permits. They are carrying these guns with the intent to use them and committ another crime. The police can only do so much, now the courts need to do their part.

I may be wrong, but I believe probation and parole officers are also part of the Shooting Taskforce so that they can violate criminals caught up in the violence and get them back behind bars where they belong

Mr. Brookman, please give credit where credit is due, Govenor Malloy???? Seriously? You know all to well where the credit is due.

Governor Malloy and Kevin Kane are the two reason"s the taskforce is operational. Why don't you explain how you think it came about

Mr. Brookman, I'm not questioning or doubting your information on how the task force came about, sounds accurate. The statement, give credit where credit is due, meaning the officers assigned to the task force who are doing the unbelievable work making the task force such a success, that's all.

I think I did that just by posting the information and saying the taskforce is making a big difference. I don't intend to name individuals, that probably wouldn't be the smartest move since they are probably impacting a lot of the criminal element in Hartford

Kevin its all about leadership in that unit. That same leader (420) was helping his guys in patrol accomplish those same goals 4 months ago. (S.S. for Chief.)

Great job by the entire Task Force!also Sean Spell and Tony Pia are two MEN, I'm proud to call my friends. Keep up the good work and stay safe!

Does anyone really think the criminals in Hartford are reading this blog let alone picking up a book!

you might be surprised who reads this blog, but the point is that what the taskforce is doing is having an impact and the message is being sent to the streets that it is not open season in Hartford any longer as long as the task force remains in effect

S.S for chief??? Let's not get crazy. Altho a pretty good cop, he can't seem to stay away from the seedy night life and strip clubs. Make a few arrests and you seem to forget him using his beer muscles a couple years ago (with the assist of a buddy). Bitch move! Let's just congratulate the efforts of the team and their accomplishments without the extra unwarranted and ridiculous rhetoric. Stay safe guys.

The Shooting Task Force and The Fugitive Task Force = Success with no egos, just results.

The Gun Task Force is a great idea and it is about time that the criminals are afraid to do their jobs. Thugs, punks, convicted felons using firearms and gang members or wannabees all ruin the quality of life of the City.

It is real nice that politicians get some credit but I would really be inclined to give them a little more if they actually showed up during an operations, kept their mouths shut and saw what the police are able to do when the right resources are put together.
Politicians and police are not a real good mix because police have a specific job and noo ne can trust anyhting that comes out of the mouths of most politicians. They go for the flavor of the day.

Having a probation or parole officer would be a great addition to this group because their presence could streamline operations b/c they do not need search warrants to enter the homes of the aforementioned punks, thugs etc... and police can go with them to protect the them.

It is time for the polcie to get te job done, knock some heads in and rid the streets of violent felons and thugs. They are all punks anyway and when shown equal of greater force usually back into the corner like the roaches they are.

NOW the courts have to do their part? Really? How about the hundreds of guns that are seized by other divisions and patrol? Gun arrests are a big part of other divisions and patrol. Officers/Detectives take great pride in recovering firearms from criminals. Not that the shooting team aren't doing a good job, but they aren't the only ones making gun arrests. So it's safe to say that the courts haven't been doing their part for a Long time! Good Job HPD and keep up the good work, even though you are not being recognized for your efforts.