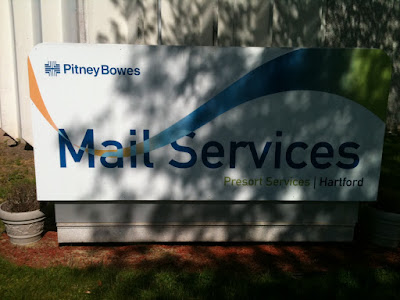 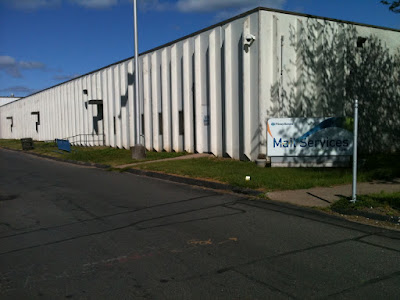 Hartford is not business friendly when it comes to taxes for companies already in Hartford or companies considering relocating to Hartford. We also know that we have lost more small businesses and jobs than have been created for years. But what is being done to retain businesses that are already here?

Although no one at City hall seems to be available to comment, at least one case is showing that very little is being done to keep Pitney Bowes Mail Services in Hartford.Pitney Bowes has a rather large facility located at 101 Locust Street in Hartford. They have apparently put the word out to their employees to expect the operation to move to Windsor in the next few months.

One source ,that wished to remain anonymous, claims that in a conversation with Pitney-Bowes management they were told that the decision was being based almost entirely on the property tax savings by a move to Windsor.Windsor's mill rate is almost half of Hartford's.

Nothing may be able to be done at this point to change that decision, but how many companies are we going to let go without a fight? Several unrelated sources have spoke with me expressing their frustration as to how the matter is being handled. Apparently the Mayor's Office is well aware of the move. The frustration level rises with what appears to be little movement to keep the company here.

Mayor Segarra's Chief of Staff Jared Kupiec was made aware of the situation through an e-mail from what I am told. The response from Kupiec was that "I forwarded your e-mail to COO David Panagore". That e-mail was forwarded to me third hand but it appears to be legit.

In a City that was serious about retaining businesses and economic development, I would have moved for a much different response. If I were in that position and knew that 130 jobs, primarily local residents, were on the line I would have been in the Mayors Office in a heartbeat. I would have told him "Come on , we need to go for a ride" and would have headed directly for Pitney-Bowes. They should have immediately met with the management and begin working up the chain of command to find the decision maker that could reconsider the move and do what was needed to try to reverse the move.

But no... in true Hartford style "I forwarded your e-mail to COO David Panagore".

If there was truly a relationship between Mayor Segarra and Governor Malloy, a successful conclusion for Hartford seems like it could be worked out. For anyone who has witnessed the interaction between the two lately, I am not sure where that relationship actually stands. Although on the positive side for Governor Malloy, the company is staying in Connecticut from what sources tell me. But if no one is making the moves to save those Hartford jobs, nothing will change.

One community leader I spoke with explained to me the fight they had to get sidewalks along Airport Road because so many of the jobs in the South Meadows and Locust Street area are held by local residents, many of them who walk to work. Many of those people will not be able to commute to Windsor due to various reasons. Bottom line is that good paying jobs for local residents are being allowed to move, with what appears to be no fight at all.

The list of jobs lost over inattention to what's happening in the business community as well as stubbornness should not be happening. Channel 3, ING, Metlife, Sunshine Laundry, Gordon Bonnetti Florist and the list goes on and on. Let's not add 130 jobs at Pitney-Bowes to the list.

Calls to Pitney Bowes and the City for comment have not been returned.
Posted by KEVIN BROOKMAN at 11:14 AM

the decision was being based almost entirely on the property tax savings by a move to Windsor
-----------------------------------
Progressives seem to think the geese laying gold eggs will simply sit still, take abuse, so that the progressives can continue to employ tons of well-remunerated bureaucrats (who are dedicated to the endless pursuit of social justice). In half-hearted defense of our muni guys I would note that it's the State that has imposed unions on muni employees. And, it's the State that dictates the amount of money going to its fabulous government schools. As to the advantage Windsor may have over Hartford, it can only be that it spends less money, taxes less. Should we really be spending a million bucks a year on "services provided at clinics for sexually transmitted diseases and infectious diseases?" How much does Windsor spend on such services?
http://capitalregionreport.wordpress.com/

Kevin there will be more of this...

Kupiac's response was stupid and he should have followed up the email to Panagore,but in typical Hartford fashion he did not.Accoding to your post,Panagore apparently didnt contact anyone at the business and so the staff let 130 jobs slip away.

part of the problem is that few to none in city hall have any experience actually owning a business and dont think it is important to retain small business.They are perfectly willing to lose the small business taxbase because they have the rest of us to tax..and tax us they will.

Just to be fair, I can't say that Panagore did nothing. I couldn't get a comment from the City so who know's what they did.

The information from sources familiar with the situation are that the City has done nothing.

perhaps if Kupiec and Panagore stopped eatting and drinking at Salute,Mortons,Dish,Vito's,etc and etc, during all hours of the day and night,they would have the energy to do some work.

I assume that Kupiec and Panagore will email you that because of their huge eatting and drinking bills ( paid by the tax payers) they are directly keeping restaurant business in Hartford.

Pedro's bills for eatting and drinking are huge also and it is good to see that he is using his charge cards liberaly for libations.

Chicago Mayor Rahm Emanuel recently offered a stark assessment of the threat to his state's future that is posed by mounting pension and retiree health-care bills for government workers. Unless Illinois enacts reform quickly, he said, the costs of these programs will force taxes so high that, "You won't recruit a business, you won't recruit a family to live here."http://online.wsj.com/article/SB10001424052702303592404577361891800868180.html?mod=WSJ_Opinion_LEADTop

Peter
I wish you would stop comparing us to the mid west. Everyone is in the same boat thanks to the wall street collapse and the bottom falling out of the housing market. It's not the pensions that hurt us it's the greed of corporate america, and the city of Hartford I'd following suit. Did you know that the biggest driver of the unfounded liability to the city's pension fund is not fire or police but the over paid big wigs at city hall and their buddies who only contribute a very small amount if thier earning to the pension fund.
So if you are looking to blame someone for the high mill rate in the city look no further than the Mayor's office and his band of misfit toys, oh I Ment all of his over paid dept. heads.
Look at the city's tax base 53 % if not more is non taxable but the may still pays outlandish salaries to his staff and others. Compare that to a town like west Hartford, Wethersfield, Bloomfield and see what the same positions get paid in that town, I can tell you a lot less than what they get paid in Hartford and that have a higher tax base figure that out, who's screwing who.

Everyone is in the same boat

Agreed. Most every governmental entity across the fruited plain has made promises it simply cannot keep. Deal with it sooner, or deal with it later.