NOT SO QUICK ON CLOSING THAT BUDGET GAP 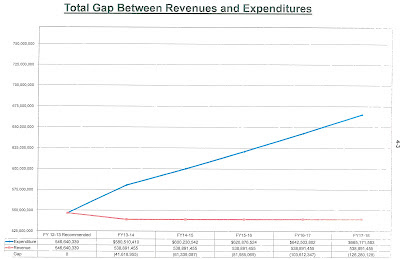 The chart above is directly from Mayor Segarra's budget book distributed today. Can you see a problem here? Yet there seems to be no talk of cutting spending. A PDF version of the chart is also below for easier viewing

Mayor Segarra rolled out his budget proposal for fiscal year 2012-2013 today at City Hall. One of the major points outlined to close next years budget gap of at least $54 million dollars might be somewhat questionable though.

Both COO David Panagore and Mayor Segarra explained that at least $45 million dollars in money owed to the City by the State of Connecticut will ease the city's budget woes. The money is apparently from school building projects, according to Panagore and Segarra, and is going to be paid up by the State of Connecticut and spread out at the rate of $9 million dollars per year over the next five years.

The only problem is, according to sources, that high level staffers in the Malloy Administration tonight are saying that this is news to them. I asked David Panagore this afternoon if anyone had contacted the State of Connecticut and if they were in agreement that the money was owed to Hartford. I never really got an answer, but according to my sources, it doesn't seem that Governor Malloy is going to be cutting a check anytime soon.

So a word of advice to Hartford's taxpayer's, don't start celebrating the "only" 3.5 mill tax increase just yet, it might get worse.

And be sure to check back tomorrow for more examples of how your tax dollars are being spent by Hartford City Hall.

Closing the city's budget gap will take a collective, fresh ideas approach. The City will hold its annual public comment budget hearing at Bulkley High School, next Wednesday April 25 at 6:00pm. All residents or other interested parties should plan on attending.

don't start celebrating
----------------------
I commend the Mayor for holding the line on spending.
It remains to be seen if he manages to close the deficit. You note some doubt about State education $. Courant reports that a lot of property evaluations are being contested.

I say keep an eye on Michigan, where towns are being put into receivership to get a hold on spending, including renegotiation of union contracts. And, take note of Wisconsin where, according to WSJ, property taxes are actually going down due to Gov. Walker's reforms. "Those include the ability to renegotiate perk-filled teacher contracts and requiring government workers to contribute more than 0% to their pensions." Personally, I doubt the need for some of our muni departments in their entirety.

I respectfully disagree with Peter,"holding the line on spending" is not good enough given the situation that Hartford faces.

I think that spending should have been cut in a rigorous and substantive way and I am hopeful that the Council does too.