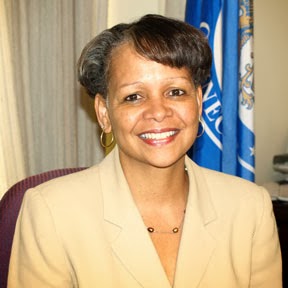 And no, I don't mean Hurricane Sandy, I mean the devastating effects of the incompetent and negligent mismanagement of Sandy Kee- Borges, Hartford's Acting Chief Operating Officer.

It almost seems like the inner circle of Mayor Segarra tries hard to dream up new ways to embarrass him on a regular basis. The new years eve caviar, stealing back their City Cars, crashing their City car's at 2 am  after City Hall has been closed for hours . Even his department heads that have taken jobs and committed to moving into Hartford  and haven't.

I would think that people who are supposedly loyal to Segarra would exercise much better judgement and decision making , but recent events show that there seems to be no regard for Segarra's public image as they pull their stunts. How do they then survive to pull the next act to make Hartford's mayor look like a fool?

Right now that is the million dollar question that most people are asking. Why is Sandy still there?

It definitely isn't because of any stellar job performance. I think we might see the answers evolve over the next few months  and I think it will most likely be an issue of self preservation. Sandy knows where many of the City Hall skeleton's are buried. I don't say this lightly, but just stand by and I think things will become much clearer as time goes on.

Any regular reader of this blog know that my information is always very solid and I stand behind what I write. Stay tuned for the revelation of the skeleton's
Posted by KEVIN BROOKMAN at 11:02 AM

It looks like they are going to get away with it. Very disappointing. Time for the skeletons to come out.

OK, I'm probably one of your followers on this blog, would love within hopefully the next week that you write something like "They're GONE" hopefully the Mayor wakes up and does right by this...if he doesn't it only proves to many that he to is stupid and a very very greedy man too !

Just read the article about SKB excuses.....went to dinner at the Hilton....well they run that dinner ever year, and any person on the Fire Dept. knows that, same with the Police Dept. It's like the Emerald Society, or Hispanic Society having their dinner too ! No biggie, and if SKB and Waller claim that they were there on Offical business, that's a bunch of crap....since when ? they were probably there to have a free dinner, cause the tickets are not cheap, and just like anyone else who goes to any of these functions, and everyone knows what they are about, they should have taken one of there personal cars, and Sandra give it a break, "Oh your 24 yr old son was in trouble....AGAIN...why would you be so upset....this is a trend for him, you would think you would be use to these phone calls, so, put the fake bull story away, nobody is buying it...Oh I was so upset, I couldn't drive, so, I let my fiancé Terry Waller drive instead....you and Terry need to get your stories straight, either you are married or not married , why would any one believe either one of you when you can't even get that story correct ! You and Terry need to leave the City, and find another town or City to use as suckers .

I don't understand how Terry Waller is authorized to drive a take home city vehicle. He does not have one assigned to him. The mayor is doing such a lousy job of spinning this that he really needs a P.R.consultant ( not on the city's dime though)

I tried looking up this event and didn't get one hit for this dinner. I even went to the NAACP of Greater Hartford website and nothing there about a Freedom Fundraiser dinner on Saturday. What was the purpose of this dinner, why did it require the City COO, and if the articles are right that this dinner ended at 9-9:30, where was SKB between then and 2:17 am? Isn't there security footage at the new police headquarters? Can SKB prove she was there during this timeframe. I smell a coverup. Kevin you know plenty of cops there, what do they have to say?

This BS sound like the TeleNovela the Laloser piled together for Jared.

this S... is old, fire her and her BF, Otherwise you look stupid or u r.

Storm Sandy strikes again!!!!
The City of Hartford is going to be a haven for more looters, just like the Mayor and the rest of his cronies. Someone call the Feds!!! We're going to need ALL the help we can get to clean-up this mess.

Kevin, If you really want to find out if there was really a dinner for NAACP, talk to people like John Stewart or Steve Harris, they will tell you if there really was a dinner or not, and if these two where there or not.

"Do you know where your children are?" said...


Well this will not be the end of the Terry and Sandy saga; it's just another chapter of of the "the tales of the two chiefs".

We now have a new chapter, Sandy's problem child, Garrett Borges, will he be fired from DPW? Or does he get rewarded like his mom, he was arrested with possession of Marijuana, it's illegal. Unless he has a medical doctors authorization.

Sandy, the concern mother, get yourself and your son some help. Call EAP.

Mr Mayor, for now on Sandy should just drive her own car. So the next time she has to run to HPD, taxpayers are not responsible for the gas.

The City should implement drug testing for all City employees. In the last couple of years, many have been caught drinking,smoking, selling and doing illegal drugs on the job. Employees should be tested randomly other companies are already doing it.

Pedro. Runs the city touchy feelly like and as a Dictator . Obey or I will make you disappear, Sandy great obedience. Please let us know where to sign up to rid ourselves of Pedro wiggles and his Napolean little man issues.

The skeletons are breaking down the door trying to get out and I know someone with a key , besides husband Charlie. Rubenstein you were auditing Elizabeth Park, don't give up follow the key.

Drug testing needs to start with the Mayor he is definately on some good s##t!