DO AS THEY SAY, NOT AS THEY DO 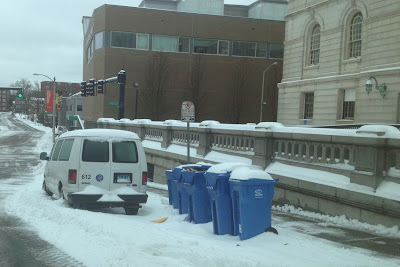 As dozens of cars were towed around Hartford for violating the parking ban and hundreds of $99.00 tickets were issued, apparently the word of the ban didn't get out at City Hall.

This is probably another example of the Segarra Administration's "Leadership by Example" as the City of Hartford vehicle pictured above was left on Prospect Street, directly behind City Hall in violation of the Snowstorm parking ban. As you can see in the picture, the van was hampering snow plowing operations as the plows had to navigate around the van , instead of being able to plow to the curb.

Also, this may not come as a consolation to those who were ticketed and towed, but the press release from the Mayor's Office was incorrect. The fee to retrieve a vehicle towed is not $196.84. The car can be retrieved by paying directly to the tow company $97.84, the parking ticket fee of $99.00 is paid to the Hartford Parking Authority.. The Hartford Police Department does not collect fees for parking violations

If your vehicle is missing from the street and you think it was towed, contact the Hartford Police Department at 860-757-4000. Be prepared to give them the location where it was parked and the plate number on the vehicle . They can tell you which towing company has your vehicle.

In the meantime, next time there is a parking ban, pay attention to it. Even if the City of Hartford doesn't
Posted by KEVIN BROOKMAN at 11:10 AM

And with all those high priced geniuses leaving City Hall, it didn't occur to anyone to have the van moved in preparation for the storm? You wonder why the City is such a mess?

The mayor is a fool.

Kevin,
Do you really think the mayor gives a damn. Most elected officials only care when election time comes around. The same game is played in my town. I know its election time when my doorbell rings.
The simple fact is there are not enough registered voters who care in Hartford. Mayor Caviar will continue to scee the city up more and the next mayor, yes the next one will have a big challenge to fix the city. The city had many chances to shine, but mis management and poor decisions by idiots. And on top of that they want second chance felons running the city?!?!! Are u insane???? Lets try checking yale and trinity college first for some fresh blood before we start scraping garbage cans. I think there is little choice left, and if the choices dont please the angry racially motivated haters, then oh well, go to night school and get educated .

This could probably be a full posting, but I don't want to draw much more attention to the matter.

Access Health CT.com, the insurance exchange in CT for the Affordable Health Care Act was running ads this weekend on TV that were supposed to make people feel comfortable purchasing insurance through the exchange.

One of the points highlighted in the ad is that they perform a full criminal background check on all of their employees.

Isn't that a novel idea

What about the two crashed cars? Who payed for them to be towed? Towing, Parking Authority and Tickets.....
Money is for who, what and where. Getting a ticket in the Hartford Public Library parking lot is a real joke. Does the Hartford Parking Authority really need to ticket people visiting the Hartford Public Library in the lot behind the Main Library? Mr Mayor have all the city cars park in the city lot across the street. MAKE PARKING FREE FOR ALL VISITORS TO THE LIBRARY. An excellent solution to get more traffic for the library.

Kevin, forget that van...have you seen the rest of the city? One "average" snow fall last week and we have already lost a foot and a half of road space to the curb. At this rate, I figure we will be down to one lane in about 4 more "average" snow falls. Does anyone remember last year?? Someone should have been fired then...Im guessing they are still in charge now! Only Hartford could make a beautiful snow fall ugly. GOOD LUCK TO ALL COMMUTING OUT OF THE CITY AT ABOUT 3pm !!!! Here's the FUNNY part ,outside of the Fire Dept,Public Works is the only other entity that requires you to live in the city to "get" the job. So to you Public Works employees I have a couple questions,,Why do you people SHIT IN YOUR OWN NEST???? AREN'T YOU SUPPOSED TO CARE MORE BECAUSE YOU LIVE HERE????

I hope manchester pd handles this new guy that wants to hit a woman. Shame on u zero tolerance for woman abuse even if it did happen at the kidik xmas festival

Prozac for dennis
Pink handcuffs for clueless
Pink slip for smith ( will). Eric is ok signs my 9s
Duck tape to put on kesslers mouth
Beer for the union debate
Caviar for kevin ( just kidding)

Merry xmas hpd. Another disfunctional year in the books !!

Bring back the hulk said...

Twas the night before xmas and all through hpd, not a member of the command was present, not even a mouse

All the fine hartford citizens were tucked tight in their beds, with dreams of non back ground check city hall employment running through their heads

Stockings hung over the oven full of p cards

Gifts all wrapped under the tree, those stolen holiday lights ipods, what a great xmas this will be

Awoke to a crash, and santa i hoped, to my amaze a ski mask worn by a mope.

To his demand , caviar and missing insurance money be placed in his hand

A call to police that santa was here, but a lazy dispatcher answered, NOT full of cheer

A hour or two later my savior appeared, with a disgusted look, and smelling of beer