ANOTHER "MIS-STEP" BY THE SEGARRA CAMPAIGN

With all the amateur mistakes coming from the Segarra Campaign I am starting to wonder if Pedro Segarra really wants to get re-elected. The incorrect statistics, the incorrect press releases, the less than factual quotes from Segarra inflating his accomplishments, and now this

Last week the news was that Segarra had fired his campaign manager over a difference of opinion and the campaign getting off to a slow start . That was quickly met by a story from WNPR reporter Jeff Cohen that there may have been a different side that Segarra didn't want to share with the voting public. You can read Jeff's story here. It seems as though the Segarra Campaign manager was arrested for DUI and then arrested along with his wife for an altercation after the arrest.

Segarra quickly hired a new campaign manager. But quite possibly a little too quickly. In this age of the internet, it would seem that a quick background check  or at least a Google search would be the first step before hiring someone that is going to represent you and your campaign. Apparently not for Segarra. If he or his campaign staff did check, they would have found the campaign managers college Twitter page with tweets referencing his illegal drug use.Michael Beckendorf makes reference to how "drunk" he is and isn't "oxycotin" a wonderful thing as well as his plans to do "Mushrooms". Oxycontin is a prescription narcotic painkiller and Magic Mushrooms are an illegal hallucinogenic 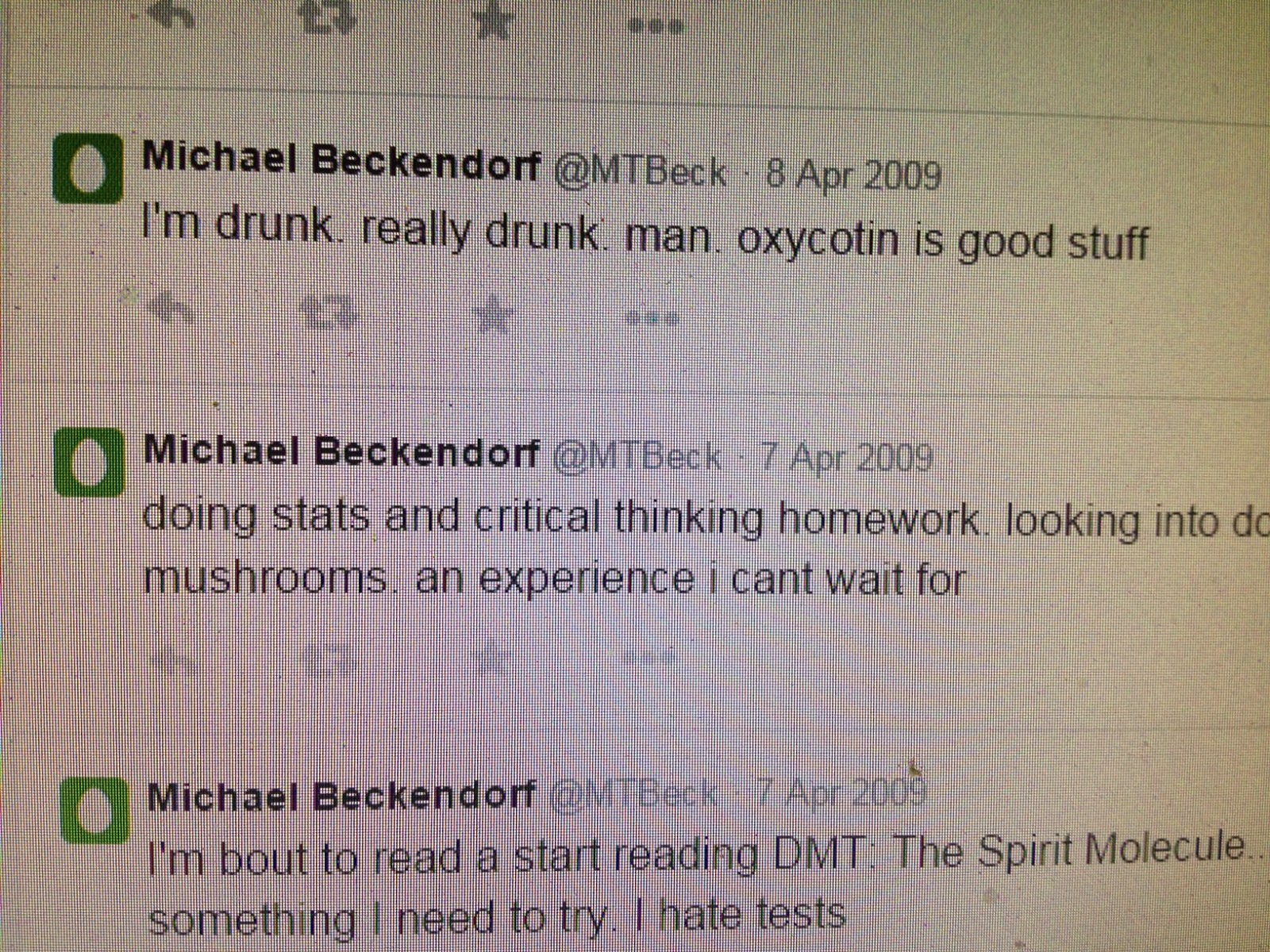 Beckendorf has now switched his Twitter account to a new screenname," MichaelBeckend"
Posted by KEVIN BROOKMAN at 12:06 PM

Dose Pedro Seggara know any Hartford Democratic that could run his so called re-election run? I would say NO. His first consideration was a disaster and who knows what is ahead. Pedro get your high political ego straight. Hartford is a very small city. You have already insulted the Democratic voters. Money is not an issue for you. Go without food, live in the cold and have no money or job. Then we will see a quick change in your behavior. Go open a new law firm in the suburbs. Today, tomorrow or whenever you will not get re-elected. GET IT!!!

I absolutely agree with what anonymous just stated. Get real Pedro Seggara. You have turned your back on Hartford residents and voters. They will in turn - turn their backs on you and not re-elect you.

I absolutely agree with what anonymous just stated. Get real Pedro Seggara. You have turned your back on Hartford residents and voters. They will in turn - turn their backs on you and not re-elect you.

Segarra's first consideration was a disaster. Segarra's second consideration is another disaster. But look carefully, most of his choices in city hall are nothing less than a disaster. Look at $97K Maribel La Loose, look at her "assistant" who likes eating tacos and reading obituaries Hilda Munez, look at total failure chief Huertas, look at the idiot who couldn't make it in RI, Thomas "The "Seller" Deller, look at now retired but engaged herself Sandy Kee-Borges, look at her fiance, the idiot who not qualified to do anything, Terry Waller. They are all a total disaster.

Pedro Seggara just dose not get it. You spend valuable time and money on a re-election run. If the residents of Hartford are so pleased with your present performance maybe they would be supporting you now. Wake up Pedro there are several Hartford gentlemen interested in becoming
the next Mayor. Do you plan to be the endorsed Democratic candidate. Well the numbers are not with you. You are done.

What was 1996? Please enlighten me, privately by e-mail or phone if that works

Why are you doing this to yourself and what is left of your reputation? Drop out and move on.

Hartford is called Pedro Seggara's
disaster city. His wild west city hall team of cartoon follies are dreadfully sad. Pedro, keep up the road to no where.

Tis Pedro Seggara administration is a sinking ship. All followers no leaders. Pedro you are closing the mayors office door and the resident and voters are locking you out. Go get a job washing dishes or windows. Pay $9.00 an hour 40 hours a week. Pedro it is a excellent opportunity for you. Your resume fits the gloves needed.

Please explain to us what happened during the summer of 1996...

So it's a college Twitter account from SIX YEARS AGO. Besides, there's 5 Michael Beckendorfs on line. Are you sure this is the same one that is Segarra's campaign manager? And really, he was in college. I'd wager that NOBODY has a squeaky clean college career.

Mr. Brookman, why Michael Beckendorf's usage of Oxycodone and/or other drugs is of any concern to you. We already know that Pedro always hires the wrong or disqualified people to the jobs, some unnecessary jjobs.

it was confirmed through 3 different sources that it was the same person so it is accurate. You don't think those posts say anything about his character?

Well, they do say that he's an idiot by taking on work for some semi-high profile people, and not cleaning up his paper and cyber trails. Pedro hired SKB, Deller, Maribel, and a lot of other sleazebags, so he's running true to form.

Pedro is all done said...

Notice to Maribel......asking a city employee to do campaign work on city time is illegal.

Well, so are we saying anything we do tat it is ilegal during college years is fine? I can give the guy a break, but to Pedro for not checking the facts before hiring s firm, after the information on the void record for his rival, after the inflated graduation rates, after dropping a campaign manager and misleading us on the real reasons, after no disclosing SKB was retained after separation, after so many things. Cronin is going to have a fest. Someone have to save this Mayor from himself, his campaign and his administration are in self destruction mode, even when there are some success to celebrate. but the lack of honesty, transparency, egotistic behaviors are overshadowing some success and making it look just a random byproduct of luck

The present miserly compensation of $30,000 is an insult to the office and an impediment to attracting talented mayoral candidates.

In June, several weeks after Mayor Michael P. Peters announced that he would not run for a fifth term, the city council voted to put the raise for the mayor on the November ballot. If a simple majority of voters approve, the higher salary will become effective this December, when a new mayor takes office. Mr. Peters would not benefit from the raise.
Hartford mayors have earned $30,000 a year since the 1980s, when the salary was raised from $15,000. Not many talented men and women, particularly those with families, will work at such a low salary. Mr. Peters has a firefighter's pension to supplement his income.

Dont forget, he gets a take home vehicle and unlimited use of his P card. Plus im sure many other undocumented perks throughout the city.

Perhaps Beckendorf helps Pedro with his "pills", could Pedro be floating him money for his pill supply?

Who will he pick next, we all know how Pedro reacts to controversy.... He's gone!
Hey stupid maybe your next choice for Campaign fraud, I mean Campaign Manager, can be the TOUCH OF CLASS MANAGER, he did well managing "PIGS" like you!!!!

Also his husband Charlie O., who gets more perks than employees and he doesn't work for the city, but he RUNS IT!

Kevin, Look what you've done. After Segarra and Charlie O. read your blog, as they always do, embarrassingly enough they decided to dump their second campaign manager.
You know how Segarra and Charlie Ortiz work: first they get excited, then they hire, oh, only afterwards they find the cracks.

Kevin, count another notch on your belt. This idiot got dumped today.

Did Pedro do parting OXY with him???? Or maybe Shrooms over Caviar; he is still experiencing delusional halusinations!