Hartford Police officers were dispatched to 24 Front Street this morning on the report of shots fired.

Upon HPD's arrival, officers located a 2010 Ford Fusion with multiple bullet holes in it parked at the entrance to the Front Street parking garage. The victim detailed to officers that she had been involved in an argument with here "friends" boyfriend. The boyfriend removed a firearm from his waistband and fired 12 rounds at her vehicle. He apparently needs to spend more time at the range,  since only 7 of the 12 rounds actually struck the vehicle.

Based upon the victims information , the suspect was identified and HPD contacted him. The suspect and his girlfriend agreed to return to the scene where HPD conducted a felony motor vehicle stop and the suspect was placed under arrest.

The suspect, identified as Austin Treadwell, 28, of 20 Front Street, Apt 318 was arrested and charged with numerous charges, including carrying a pistol without a permit, unlawful discharge of a firearm, Reckless endangerment 1st degree, Weapons in a Motor vehicle, Criminal Possession of a high capacity magazine, Criminal Mischief 1st Degree.

Treadwell had apparently disposed of the weapon, a 40 caliber pistol in East Hartford before returning to the scene. The weapon was recovered through the efforts of HPD. 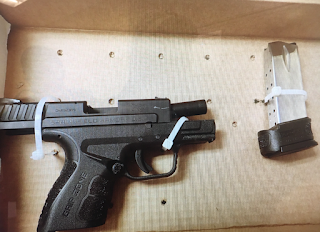 And half the midnight shift was on overtime because HPD is so understaffed. Maybe when this violence spreads to Elm Street our Mayor might start paying attention

Now that you posted this, the Courant should have it any second now as "breaking news"

Kev, Thanks for providing suspects address , I'm mailing him a application for Hartford Fire Dept ! He will have a bright future there . Do you know if he also sells drugs and beats his kids ? Cause that look good on resume.

Will be interesting when about 30 or so more cops retire this summer. Already down close to 100
And yes, most cops have completely shut down. It is a reactive police department now. No cop wants to get jammed up knowing the city only cares about heated bus stops or giving millions away
I will work my two pjs a week and call out sick once a quarter. Six figures for me.

That may have worked under Chief Huertas, but I think HFD has raised their standards and behavior substantially under the current leadership of Chief Freeman

At the council meeting tonight Bronin is proposing to take away our sick and vacation buy out. All the more reason to shut down.

No cop wants to get jammed up
==========================
It's pretty clear that neither Dan El Mal-loy nor his Hartford Honcho consider having the cops' backs to be the first priority. It's also pretty clear that our finances have been so badly managed that now the fundamental operations of the municipal government are not going to be properly provided.
We shouldn't have to a pay a dime for the crumby Ct. Hartford School District. Take the tens of millions of $ the State takes on that account, so that the City may fund the firemen and cops.

Thanks for pointing that out, I knew it was close. Hard to believe the beginning days when I thought 10 views a day were great numbers. If City Hall keeps going the way it is going,
3 million can't be far off. And Thank you to everyone that reads my rantings.