HARTFORD AUDITORS: XL CENTER OWES HPD OVER $700,000 IN PAST DUE POLICE SERVICES BILLS 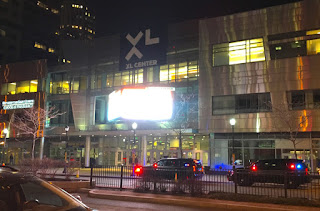 Hartford's City Auditors have uncovered that the XL Center owes the Hartford Police Department and the City of Hartford over $700,000 in past due bills dating back to 2016 for private duty police services.

The full audit report  released today is below.

There is no excuse for this and the CRDA, which manages the XL Center should be required to pay their bill immediately if they plan on continuing with events that require a Police presence. The Capital Regional Development Authority (“CRDA”), a quasi-public agency of the State of Connecticut, has operational responsibility for the XL Center.

I also wonder how Mayor Bronin can honestly sit and urge the HPD Union for givebacks to close a budget deficit, when we are bleeding large amounts like this. It is called management Luke and as the Mayor, it all falls back on you

I wonder how many Animal Control Officers the City could hire with $700,000?

Prolly the same amount if the 400K was paid that Lou Crabtree mismanaged and was never arrested or investigated for. That tab does not fall on like Bronin you are reaching they would literally have to sue in court if they want the bill paid

So this was all under Bronin’s watch?
He can’t blame Pedro and the previous administration?

6:07 PM, yes it was, from 2016 while Bronin was Mayor and Darryl Hill was Finance Director or CFO or whatever bogus title he called himself.I wonder if that will be listed as part of Luke's "record" he is claiming for his political rung climbing

Yet nothing about the sergeant stealing gas or company time

Kev, How funny,STRIKE THAT, sad it is that everything bad,corrupt,criminal,mishandled,unmanaged,mismanaged or let’s bottom line it - F%@KED UP is within walking distance of city hall !!! Dunkin Donut Park , Dillon Stadium ,the Safety Complex and now the XL Center. Why couldn’t Bronin or one of his cronies go take a short ride and check out how construction is progressing or not ,as in the case of the soccer stadium,how about a lunch to discuss unpaid matters as you just exposed,is that asking too much? Then again maybe it’s impossible to leave the Sodom and Gomorrah atmosphere at city hall ! Kev, What ever happened as far as discipline is concerned with the idiots at city hall that logged onto the Ashley Madison spouse cheating website? They used city property and were on “ the clock” while being creeps. Where is the list of names?????

why would the auditors look into that HPD IAD and the courts are already dealing with it?

What more is there? It’s pretty cut and dry. The mainstream media did a great job covering it. His downfall all started after a tough battle with cancer, and now he’s more than paying for his misdeeds. Do you get off on seeing others in pain? Wait.....I know the answer to that.

And that is why you didn't see any of it here.

$700,000 owed? That's a lot of money. With that kind of money Torres-Rodrigues could hire a few more deputies.

$700,000 could pay for TJ Clarke legal fees to defend him in the latest sexual harassment scandal

$700,000 could be of great help to the Bronin For Governor campaign

I wonder if there are late fees and interest for not paying within a reasonable time frame kinda like a homeowner does if we are one day late. Does anyone know about these fees?

There should be a fixed late fee, it's called DISMISSAL.