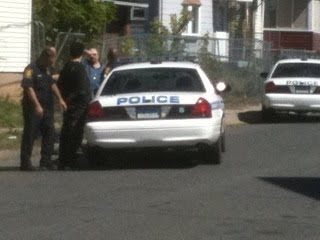 A homeowner interrupted a burglary this afternoon at 398 Franklin Avenue and held the burglar at gunpoint until police arrived. The homeowner was in the home when he heard an alarm go off and when he went to check it out he found the burglar inside the building near the back door.

I guess this burglar picked the wrong building to burglarize.
Posted by KEVIN BROOKMAN at 3:21 PM

This homeowner should get a commendation from Chief Roberts...

Kudos to the homeowner and great job HPD for the quick response...I'm glad the burglar was caught and no one was hurt.

Now I haven't been down Franklin Avenue in a while, but I could've sworn I read in the paper months ago about a house at this address was blighted and condemned. I'm wondering why would a burglar break into that property in that condition unless it's been cleaned up over the last few months.