THIS ACTUALLY SEEMS TO MAKE SENSE 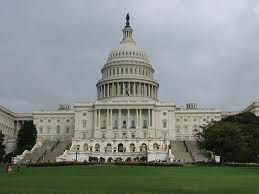 Yesterday I got one of those "chain" type e-mails regarding Congressional reform. Normally I would just have deleted it, but it actually seemed to make sense.

With the approval ratings for Congress at an all time low, and the "anti-incumbent" backlash seeming ready to take its toll November 2nd, these ideas really make sense.

Since this would affect politicians, the same politicians who make our laws, I doubt it would go anywhere, but it just seems to make sense.What do you think?

This is the text of the e-mail below:

If each person contacts a minimum of twenty people then it will only
take three days for most people (in the U.S. ) to receive the
message. Maybe it is time.

THIS IS HOW YOU FIX CONGRESS!

1. Term Limits. 12 years only, one of three possible options below:

2. No Tenure / No Pension. A Congressman collects a salary while in
office and receives no pay when he/she is out of office.

4. Congress can purchase their own retirement plan, just as all
Americans do.

5. Congress will no longer vote themselves a pay raise. Congressional
pay will rise by the lower of CPI or 3%.

7. Congress must equally abide by all laws they impose on the
American people.

Serving in Congress is an honor, not a career. The Founding Fathers
envisioned citizen legislators who serve their term(s), then go home
and back to work.

Posted by KEVIN BROOKMAN at 4:31 PM

The once honor and privilege to serve our country as a political leader has now become a career path for most and that's not what government was intended for when our constitution was drafted.

That list is a good start but they should add, no more corporate lobbying allowed. Mega companies are the ones who hijacked the legislative branch and get laws passes that increase their profit margins at the expense of free market and public interest.

Our modern day government's primary function has now become passing laws in an effort to fix all the damage they have done to our country with past laws.

Ummm folks, we cannot go back to live as if it was 1789 again....the suggested email was simplistic and franklu stupid for a number of reasons.

We are the world's strongest empire in the worlds history and we should act it instead of romanticising living in 1789 when we were a new country.

Bruce, what does trying to make our government independent of corporate hijacking have to do with wanting to go back in time?

There's no romancing our jobs going over seas for cheap labor or our government allowing companies to call the shots. Also your claim we are the strongest empire in history has zero relevance to our state of affairs. Rome was the strongest once too. We are only the strongest due to all the massive debt we accrued, mostly to China. China is kicking our a##, for we have become short sighted and profit driven due to politicians being manipulated by Wal-Street types all for profit margins. Research the bank bailout, it was done over night hush hush because bankers told congressman the county would collapse if they didn't pass the bailout. Funny how something almost no one in America wanted still got passed, but then again "We the People" have very little say in passing laws anymore.

Yes the email is simplistic but far from stupid. Look at all the horrible bills politicians pass just in hopes of getting reelected. Their desire to keep sitting in their fat-cat part time jobs has taken priority over protecting the American economy. Look at our currant state of affairs for more examples.

I agree with making sure our government doesnt come under control of large corporations like our two largest parties have, nationally.

I would have voted against the bailout, just like Congressman Courtney did, for much of the reasons you cited.

I still believe the email Kevin received is VERY simplistic and not well thought out.If there are term limits there will be little institutional history or expertice as legislators will be rolled in and out every 12 years and the beauocracy of our government which mostly are civil service jobs,and not elected or subject to term limits, will obtain an even greater hold over the process then it already has.The difference here of course is that you can vote a legislator out but not a beauocrat.I can think of several other reasons why the email is bad.

Term limits (and the other suggestions)have their virtues, but they are procedural as opposed to substantive, at least in the short run. Put differently, the value of term limits will be de minimus if we can't get politicians to deal with the problems at hand. For my money, so to speak, the critical problem both nationally and Nutmegally is budgetary out-of-whackitude due to gross over-spending/promising. On the national level I would encourage folks to check out Rep. Ryan's proposal to fix the entitlement problem before it becomes a catastrophe.
http://www.roadmap.republicans.budget.house.gov/plan/summary.htm
It looks to me as if here in Ct. we are going to follow California rather than NJ, and let the situation deteriorate further before we fix it. I predict Governor Malloy (with the Dem legislature), heaven protect us, will attempt to close the $3.2billion shortfall in the coming year (and the following one)primarily with tax increases.