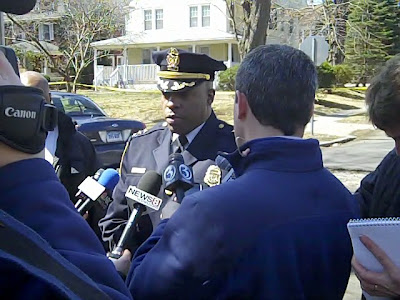 A 22 year old man was shot at least eight times this morning as he sat in a car in the driveway of 13-15 Thomaston Street in Hartford's Blue Hills neighborhood. This brings to ten the city's number of homicides so far , just a little over three months into the new year.Chief Roberts commented to the media and his remarks can be seen below, turn the volume up since he was somewhat soft spoken.

Chief Robert's comments are below:

Posted by KEVIN BROOKMAN at 4:50 PM

As a resident of the Blue Hills neighborhood, I concur with the residents in the news reports that say this area is usually very quiet, and these shootings don't happen here frequently.

Concerning Hartford's 10th homicide of the year, it is a shame that these people are dying year after year. It is like a broken record. As small as this city is, why is there so much crime?
I wonder how much worse it will get this summer.