THEY TALK THE TALK, NOW THEY NEED TO WALK THE WALK 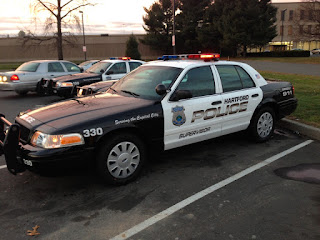 Change is well underway at HPD. Some of it will be obvious, some will not be that obvious to the general public. One of the most obvious will be the new fleet of police cruisers about to hit Hartford's streets. HPD will be breaking from tradition and starting to take part in a national trend in putting black and white cruisers on Hartford's streets.

The first of the new fleet are arriving and being outfitted now.

Another change will not be quite as obvious. This Friday at 2:00PM at City Hall, Chief Rovella will be promoting 5 individuals to the rank of Deputy Chief. Read more about the promotions here, These promotions will mark the first time in several years that the Command Staff of HPD has actually come close to representing the makeup and diversity of the community they serve.

More encouraging information is also coming out this week that we have a shot, no pun intended, of having the lowest homicide rate in almost thirty years. Although everyone wants to potentially take credit, especially our Mayor and other politicians, the fact of the matter is that the vision of a handful of people are responsible for the crime reductions. Foremost among them is Hartford's new Chief James Rovella and a person who has been instrumental in implementing and carrying out Rovella's vision, Hartford Police Lieutenant Lance Sigersmith, Commander of HPD's Intelligence Division and the Shooting Task Force, Credit needs to go as well to all of the agencies and personnel working hard to clean up our City under "Team Rovella",

Across the board from the beginning of Rovella's tenure, it seems that a new sense of professionalism and motivation  has swept over HPD and I don't mean to belittle any ones efforts by leaving anyone out. Major crimes detectives are clearing more cases through good investigations and taking criminals off the streets, Patrol officers are carrying their weight knowing that there is a new sense of accountability and fairness in discipline when needed.

Things seem to be starting to click as a team and the results seem to be showing, Whether through increased morale or reduced crime stats.the results are obvious. I guess that is what effective leadership does.

What the politicians who are eager to take credit for the results need to keep in mind  is that these results don't happen by chance and without an associated cost. Reduced crime in the Capitol City doesn't come cheap. It involves overtime for staffing, equipment and other supplies and related expenses. In a City that sometimes spends money ridiculously, tough choices are going to be made during the upcoming budget season, one of the areas that should not be cut is Public Safety because under Rovella we are finally getting our money's worth. Compare his results to those of the Board of Education and see where we are getting our money's worth.

The results are obvious.Crime is dropping and people "afraid" of Hartford are sure to take notice if HPD handles the message properly. Both our local leaders and our state leaders need to do their part to make sure their investment is properly protected and properly funded. Chief Rovella's vision isn't cheap, but it is working  and the results are showing
Posted by KEVIN BROOKMAN at 8:58 PM

How long will it be until you turn on Rovella Kevin? I remember you singing the mayor's praises when he first showed up.

I have never "turned on anyone. When someone is doing right i say that and when they are doing wrong I say that also. I did have high hoopes for Mayor Segarra after what we have gone through with Eddie Perez. I think Pedro still refuses to make the tough decisions he needs to as Mayor and is locked in his Social Worker mentality. If he would make the tough decisions, City hall would be running much differently and the cronyism would be a thing of the past, rather than alive and well as it is now. If Chief Rovella keeps in the direction he is going I will continue to support him

Never mind that!!!! Cars look awesome. Awesome job to the two sergeants that made the black and whites happen!! Those are the best cars in the state! Maybe the country, proud to be HPD!

You will change your musical flute tune once someone does not agree with your perfect world theories.....