It seems as though our tax dollars are at work in Hartford, as at least 5 hartford.gov email addresses have been used to hook up on th website. I will see what additional information can be uncovered as to the identity of the Hartford City Hall cheaters.

It looks like many people that should be using government resources to serve the taxpayers are instead using the website to hook up instead. Line 240 below indicates at least 5 users from hartford.gov. Maybe it is easier  and safer for those at City Hall than using the escort services they have apparently used in the past 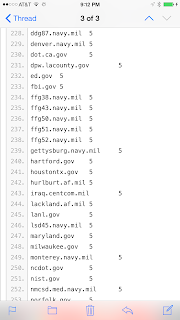 Posted by KEVIN BROOKMAN at 9:45 PM

Kevin thanks for opening up this can of worms, it will be very helpful.

Wow I refuse to believe that any city official would be dumb enough to use a work email on a dating site!!!

How I do believe that city officials ARE dumb enough and use their work email on a cheating site such as Asley Madison.
There's no control at Harrforf city hall, there's no lesdership. Officials get there in the morning not to work, but to do whatever they wish.

Kevin, this is a good one!
What's next, are you going to expose them using city credit cards "by mistake," you know, the way "the waiter took the wrong credit card" to pay for Pedro's caviar?

@Anonymous 10:47 PM - you must be a newcomer to Hartford. If you have been around you would know that there are any number of city employees who might do that, either because they don't understand that they shouldn't be using a city email account for this sort of thing and or because they are so arrogant that they never thought they would be exposed and even if they were, no one would do anything about it. Sad.

THOSE CITY EMPLOYEES USING CITY EMAILS FOR THEIR ASHLEY MADISON/HAVE AN AFFAIR ACTIVITIES MUST BE EXPOSED.

Kevin, are you suggesting that Pedro Peter Caviar Segarra is cheating on Charlie Ortiz? Help, the world is coming to an end.

Kevin, I hope the information you provided here didn't surprise you. After all, look at the conduct of your mayor himself: dealing with an escort service, Touch of Class, with their prostitutes or escorts, filing for bankruptcy and most likely providing a federal judge untruthful information, a guy who has built his careers with lies and cheatings. As a result, city employees get a message that they can do whatever they wish, right or wrong.

Everybody knows that many city employees start their work day by logging to
WE THE PEOPLE HARTFORD.com upon their arrival to city hall.

Nobody knew that city employee started their work day by logging to
ASHLEY MADISON.com upon their arrival to city hall.
That is until now, of course. Thank you Mr. Brookman.

I agree with 7:02am, all 5 city employees on Ashley Madison must be exposed. Must!

This is - without a doubt - the culture at Hartford City Hall.

Will any of you readers, anyone, be surprised to learn that not only city email accounts were used with the AshleyMadison website but also city credit cards were used as well?

Bravo Kev, this is truly a good one, a mirror of the Segarra Administration.

Co~no,
I hope Puerquito isn't cheating on chicken of the sea, like he did to Mendez...

I'm not sure I understand why the Chief Auditor was sending a copy of his report to P. Segarra. What for? Why waste any paper? Mr. Campbell knows that P. Segarra doesn't understand a damn thing in that report, he's too busy raising cash for his failed campaign, and, no matter what, P. Segarra will do nothing to correct this very serious tax collection problem.
Save paper, Mr. Campbell, go green, eliminate P. Segarra from your mailing lists.

the background check on Pedro Segarra revealed that his email address was "IMXXXKinky@AOL.COM". and his aliases were "Peter Segarra and Maria Uaga". The background check has been furnished to Mr Brookman and about 50 other people,including several media members.

well, is the XXXkinky guy on the VIP list?

How do you get the Ashley Madison members list? Who are the members using their hartford.gov email accounts? Would you allow them to come clean by disclosing their identities on this blog?

You are not going to believe who these five individuals are. I'm willing to bet on one name.

we're used to hearing bad news coming from hartford city hall, from the disfunctional segarra administration, so nothing can surprise us anymore