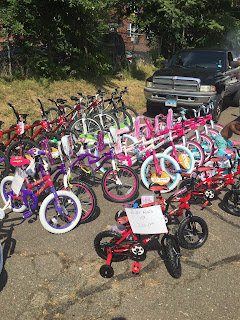 The brand new bicycles donated by the Allan's for Hartford's children. On display at yesterday's Maple Avenue NRZ Community Day
Lately it seems that we hear all the negatives of every police action but so many good deeds by police officer's in our community go unnoticed The following example is something that isn't new, but it has gone mostly unnoticed for the last several years.

Each year the Maple Avenue NRZ has a community day outing behind the Webster Theater. The event is organized each year by Hyacinth Yennie, chairperson of the Maple Avenue NRZ and a tireless advocate for Hartford's neighborhoods. Yennie, through  her NRZ has enveloped the true meaning of community policing and the results definitely show.

Yennie and her members have developed strong ties with police officers assigned to the south end and sometimes it almost seem like a family relationship more than a Police /Community relationship.

Recently the Lieutenant assigned to the Southend for the last several years has been reassigned as the Commander of the HPD Traffic Division. Lieutenant Robert Allan continues to show his regard and concern for those in the Maple Avenue NRZ area, even though it is no longer his assigned area.

A few years ago, Lt.  Allan and his wife Kelly came up with an idea to donate a couple bicycles for a giveaway to children from the area that may not actually have bikes. CCMC (Connecticut Children's Medical Center) also donated bike helmets for the young riders. The look of surprise and appreciation on the luck recipients was amazing. The first year a young boy claimed his new bike, telling everyone it was the first bike he ever had owned.

Over the years , the Allan's have "upped"  their game, Yesterday, through their own generosity and with the help of others, including the Hartford Elks,  Lt. Allan and his wife were able to donate and give away over 30 brand new bikes to Hartford Children, complete with donated helmets.

This is what community policing is about. Congratulations to Chief Rovella and the men and women of his Department who clearly "get it" and understand their role in  making Hartford a better place to live.

The Hartford Police Union provided complimentary hot dogs and hamburgers for those attending. 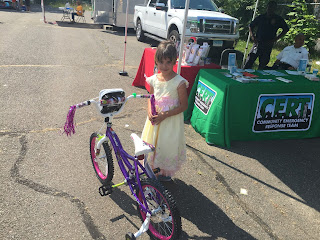 Kevin -- you couldn't have written a more accurate statement: "Yennie and her members have developed strong ties with police officers assigned to the south end and sometimes it almost seem like a family relationship more than a Police /Community relationship."
Policing in the South End of Hartford IS a communal if not personal affair, due directly to the efforts of Lt. Rob Allan and his talented officers throughout all of South Hartford. Not to brag, but I don't think there are neighborhoods in Hartford with better ties and connections to their police force. The yearly bicycle donations are the proverbial icing on the cake. Kudos to Kelly Allan, in particular. It was a real joy to watch all of those kids rushing to pick their bikes and helmets and then make their test rides back and forth across the lot.
Kudos also to our Deputy Mayor Yennie. The South End wouldn't be the same without her.