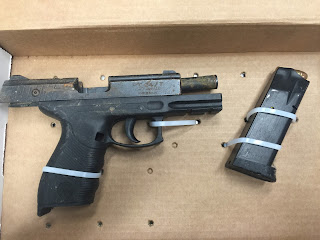 GUN FOUND BY CHILDREN AFTER THROWN BY SUSPECT

Officer Suarez lost sight of Soto in the area of 9 Crown Street. Patrol and STF units conducted a canvass for Soto. Soto was found hiding on the rear porch of 31-33 Crown Street, with no shoes.
A search incidental to arrest of Soto's clothing yielded a knotted plastic bag containing a white rock like substance, suspected Crack Cocaine. A canvass for the firearm was met with negative results.

On Monday, September 7th, 2015, at 1456 hours, residents at called the Hartford Police
Dispatch Center and advised a child had found a firearm under their front porch. Patrol and STF

Units responded and seized a fully loaded .45 caliber firearm with a chambered round.

Accused Soto, who was still being held at 101 Lafayette Street for arraignment, was de-briefed by Detective Rostkowski and Officer Morande. During the de-brief in a written statement, Soto admitted that the firearm located was the firearm he had been in possession of, and that he had thrown it under the porch as he fled

wow. Don't know how old the child was but imagine a child finding a fully loaded gun? Kids don't stand a chance growing up in neighborhoods where their brothers, uncles, fathers, friends run around with guns.
This insanity has to stop. Kids need a chance.

Let's just hope there is no retaliation to the child/family who found the heater. To most readers it is the right thing to do, however, in the hood it might be seen as snitching.