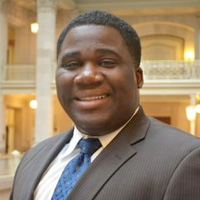 As reported here first last week, former Hartford City Councilman and now former attorney, Corey Brinson has had his law license suspended by the State of Connecticut. You can read the original posting here https://wethepeoplehartford.blogspot.com/2016/11/more-trouble-for-former-hartford.html

The suspension order was signed on November 10, 2016 by Superior Court Judge, the honorable  Antonio Robaina. The suspension is apparently effective immediately and the Court appointed a trustee to oversee Brinson's accounts and client funds.

The suspension would seem to be the least of Brinson's worries now though. Brinson is allegedly embroiled deep in a federal investigation over Federal Charges of alleged money laundering, stock fraud  and other illegal schemes involving millions of dollars You can read more about the Federal allegations in this article in the Journal Inquirer http://m.journalinquirer.com/mobile/article_e2f1cb7e-a666-11e6-980d-3b8a69ac1b87.html

According to sources familiar with the Federal investigation, it is expected that Brinson will plead guilty to charges resulting from the investigation. That guilty plea will also apparently involve incarceration in a Federal Prison , according to sources, for potentially 2 years. That plea could be as soon as next week in Hartford Federal Court.

The choice of the trustee is also somewhat surprising. Judge Robaina appointed attorney Devaughn Ward as the trustee to oversee Brinson's matters. Devaughn Ward was recently apparently let go from Hartford City Hall where he served as the Inter-Governmnetal Affairs Liasion for Mayor Luke Bronin for less than a year.

. Although Ward is supposed to bring some order to Brinson's financial affairs, Ward is currently subject of a lawsuit by People's Bank for a loan People's claims Ward defaulted on. Ward \has also apparently ignored court orders for weekly payments to People's Bank. Ward and his finanacial records will be the subject of an "EJD" hearing in December.

EJD or Examination of Judgement Debtor  is a legal procedure that will force Ward to present all of his financial records to attorneys for People's bank to help determine why Ward has not repaid the loan and what financial means he has available to repay the loan, under oath and supervision of the Court. Hopefully Ward can have better control and management over Brinson's finances. You can read that order below for a better understanding of the EJD process

Also interesting is that even though Ward is a licensed attorney in Connecticut, he is not affiliated with an actual law firm and appears to operate out of his apartment at 55 Trumbull Street, as reflected in the documents on the Connecticut Judicial website.

You can read and review the Ward vs People's Bank complaint here http://civilinquiry.jud.ct.gov/CaseDetail/PublicCaseDetail.aspx?DocketNo=HHDCV156058463S

What a shame, Another African American male who could have been , and should have been a mentor and role model for his community is instead highlighting the pathway to prison. Were Brinson and Earl O'Garro buddies?

Kevin, maybe Cory was a Hillary supporter and HPD along with Director Comey had the FBI go after Cory?

I doubt it, remember Brinson is a Republican

He's gonna beat this case hands down the. Ride off into the sunset

6:54pm
Did you read the post? He is apparently agreeing to a plea deal and accepting jail time. Innocent people don't usually do that, especially if they think they can "beat it" as you say

And Donald Trump will never gt elected as President. I guess we will have to wait and see who is right.I am betting on my sources and not your blind loyalty

Ok, so Corey Brinson is being investigated for fraud.
WHAT ABOUT FRAUD INVESTIGATION/S AGAINST PEDRO SEGARRA AND SAUNDRA KEE-BORGES?

1:29pm, one wrong is not offset or overlooked because you come up with other issues.apparently no one has filed a complaint. The US Attorney does have a fraud hotline which I encourage you to call with any specifics you might think are worthwhile

"Community" is such an ironic word in Hartford.

Everywhere else it means a group of people coming together.

When used by a person in Hartford of a particular race, it means only people of that race or loyal to that race. So, when Minnie Gonzales says that someone is not "from the community" it means they are not Hispanic (or are Hispanic but do not act "Hispanic enough").

When someone from the North End says that someone is not "from the community" it means they are not black or do not act black enough.

It is sad that this gifted person is facing jail time. Instead, he should have treasured all the good that he had and that it was time for him to give back.

What is going on with the Chris white saga????? In front of the entire give back day he says yoga is for woman and homos! I have never been so offended in my life at the blatant disregard for people's feelings! And to show how sick the department is everyone just laughed. Not even the supervisors in the room cared, I'm heartbroken for the gays in our department

I find the Chris White comment rather disturbing....last I knew he himself was quite involved in yoga and has expressed his complete love of it. He's definitely not a woman so that could only mean one thing! LOL