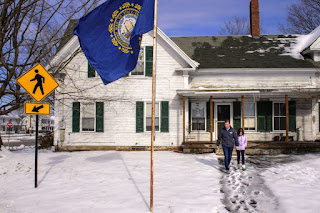 I get tired of people that continually use Hartford and its residents as pawns in their complicated games of ego chess.

Hartford's Mayor Luke Bronin is one of the people that plays that game and thinks no one is smart enough or even cares enough to pay attention. But we do.

If you remember, shortly after his first election he went on the campaign circuit for failed Presidential candidate Hillary Clinton. I think the Bronin's and the Malloy's had the moving vans reserved and backed up to the front door on election night, ready for their ascension back to Washington D.C. as a reward from Hillary. I am sure there was much anger from Luke and Sara when the results started rolling in and they realized they were stuck in Hartford. I am sure they never thought Donald Trump could win.

Since that didn't work out as planned, Luke came up with another scheme. He would ride the coat tails of his Capitol godfather Dan Malloy into the Governor's Office. I guess he didn't pay attention to the polls to realize how unpopular Governor Malloy was as he was leaving office.

Regardless, he spent months criss-crossing the State of Connecticut on his campaign efforts when he should have been focusing on the promises he made to the people of Hartford to get elected.

Hartford suffered while Luke ran, but what does that matter, he had his eyes set on a greater prize.

Well, that effort also flopped and Luke was once again stuck in Hartford.

Now at a time when opioid deaths are soaring in Hartford, Hartford School students are assaulting Administrators, violence in the schools is starting to boil over. That evidenced by this weeks stabbing of a student at the Hartford Schools latest showplace, Weaver High School. And lets not forget the gun violence that has given Hartford the proud distinction of the most violent City in Connecticut and most likely New England.

Much of those things are happening under the watch of Luke Bronin, but then again, it is hard to see those disasters when you are out on the campaign trail. Whether that campaign trail was for a failed Hillary, a failed run for wannabe Governor Bronin or now his long shot support for Presidential candidate Pete Buttigieg . Bronin spent much of last week out of Hartford campaigning for Mayor Pete instead of staying in Hartford doing his job as Mayor Luke, the job he was elected for.

If nothing else, if by some fluke, Buttigieg is elected, I could probably resurrect the nickname of lying Luke. Does anyone else remember Bronin's campaign promise that he was happy in Hartford and had every intention of completing his four year term as Mayor?

I can picture the conversation now from a snowy café in Nashua , New Hampshire.

Bronin to Buttigieg, "When you get elected as President,Pete  where would I fit into your Administration ?You know I am up here in the cold campaigning for you when I should be focusing on my own mess in Hartford"

Hartford needs a Mayor that cares about Hartford and can honor his (or her) commitment to make Hartford a better place, not to ascend to the next rung on their ladder of political aspirations.

So far we have not seen that commitment from Luke Bronin to Hartford.
Posted by KEVIN BROOKMAN at 2:17 PM

I was fooled the first time. I admit. But there was no way Luke was (and didn't) getting my support this last election. Apparently, most didn't learn their lesson as did I. U reap what u sow. He makes and breaks promises knowing there are no checks and balances in place.

And yet people voted him in for a second term. The majority of people are blind, deaf and dumb. Lots of Meh mentality people out there. I can't wait to move out of here...

Hartford will elect whoever will keep the gravy flowing and has the (D) after their name. Just like all the other derelict cities in this state.

Ol Lying Luke talks a good game. In reality I don't think he gives two f#!@ks about this city. He ran for a second term because his plan to spring board into a higher office failed and he had no other political choice. The similarities between him and Buttigege are remarkably eerie; both phonies with no real plan, using the office of mayor to ascend to a higher office. What a joke!

Well Pete won’t win, once Bloomberg or Bernie gets the nomination you’ll see Luke jump ship over to that campaign.

Now would be a good time to have a vote of no confidence.

Why the bother ? Other Mayor's did the same thing with hardly any notice...even Kevin's hero Mayor Mike campaigned in New Hampshire.

These days with I-Phone you can do mayoral business from anywhere.

I think you are missing the point, while he is focused on other endeavors he should be focused on Hartford's problems an d the job he was elected to do