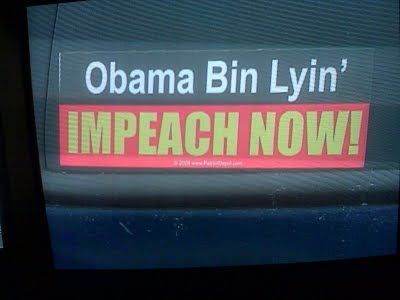 I received two separate calls this week about activity taking place under the control of the Hartford Fire Department Administration. Both of these incidents make me wonder if anyone in the Chief's Complex at Fire Headquarters has read the US Constitution.

The first incident involves a firefighther who had two bumper stickers on his personal vehicle. One read "Obama bin lyin, Impeach now", the second read "Somewhere in Kenya a Village is missing it's Idiot" and in the center of the "o" in idiot is the circular logo that was the trademark of the Obama campaign.

During the evening of his shift on November 10, 2009, Mike DiGiacomo, the firefighter, was approached by Hartford Fire Assistant Chief Milner. Milner informed DiGiacomo that he could no longer park his vehicle in the firehouse unless he removed the stickers. Apparently, Milner told him, someone had complained about the stickers and it was creating a hostile work environment. The stickers don't appear to be threatening or obscene, just merely expressing a view point that the firefighter was unhappy with President Obama. It brings to mind all the negative Bush stickers that were trendy toward the end of the Bush years.

Being able to slap a bumper sticker on your car and voice your opinion is a basic civil right, I feel, awarded to all of us whether you agree with the message or not. I think we call that freedom of speech and freedom of expression. Chief Milner advised the firefighter that this matter had been discussed with the Firefighters Union and Hartford's Corporation Counsel and both agreed with Milner's order. If the union agreed, I am surprised. Calls to the Union office have not been returned.

If the Union agreed though, what might be next? Maybe an order to remove all IAFF stickers and emblems from members cars if negotiations don't go well and the City becomes upset. Maybe telling a firefighter he can't wear a crucifix because an atheist firefighter doesn't like the message it sends?

The second incident involves Hartford Deputy Chief Dan Nolan, who was terminated by Chief Teale. That termination will be the subject of a Labor Board hearing November 23, 2009.

I posted a lot about Nolan's termination, and at the risk of sounding like his PR agent, I'm going to post more. I still believe in right and wrong.

Let me start by saying that when I spoke with Nolan about the incidents, I made it clear that I thought he could have handled the situation differently, but everyone has their own style of dealing with issues. The first incident began when Nolan crossed paths with another Deputy Chief from the Hartford Fire Department, someone who played a part in Nolan' termination. The Chief approached Nolan and acting as though nothing had ever happened, said hello and asked how he (Nolan) was doing. Nolan responded with a prompt "Go f**k yourself". That comment seemed fair since they had already done it to him.

The second incident occurred at a retirement party at a downtown restaurant. During the party, someone asked for everyone to be quiet because Chief Teale was going to speak. Nolan responded the people he was with "f**k Chief Teale". Although Nolan's comments may have not been the best choice and may be socially unacceptable, the last I knew this is still a free country and poor taste isn't a crime.

On October 19, 2009 Nolan's union attorney received a letter from the Hartford Corporation Counsel's office. The letter is posted below. Essentially the letter threatened Nolan with possible arrest as "the City of Hartford has referred this matter to the Hartford Police Department".

Nolan readily admits to the statements, but both Nolan and other sources have confirmed that there were no threats or anything else said, other than the remarks quoted above

The part that makes me wonder if the Corporation Counsel and Fire Department administration understand what "freedom" means is in paragraph two.The letters author writes " we would like to remind your client that he is not allowed to enter fire department property or to attend any department sponsored events such as: retirement parties, memorial services, graduation or promotional ceremonies.". How do you forbid someone from attending events that are open to the public?

Hartford Police Department sources did confirm the existence of an investigation at the request of the Corporation Counsel's office. The source also stated that no evidence of any criminal violations was found after several interviews, including Chief Teale and Nolan himself.

I can understand that he can't enter fire department property if that means going inside a firehouse. Other than that, the rest is fair game and I would be interested in knowing how they intend to keep Nolan out of public events. I would imagine any action to keep him out will only add to his eventual settlement before a jury.

Finally, Ramos, the attorney from the Corporation Counsel's office, insists that Nolan "desist from uttering any disrespectful comments against his former supervisors". I've always been told that respect is earned, not demanded. In the entire Nolan case, I can't find anything that would seem to earn the respect of Teale
Milner or Parker. The entire situation has been handled poorly by everyone involved from the Chief on down to the Corporation Counsel and even the Firefighter's Union leadership and like I said in the beginning, I don't think Nolan used the best judgement either. But in the end, I guess that's what juries are for.

We do still live in a free country and actions such as these should be offensive to anyone that believes in freedom. I may not agree with Nolan's language at that time and place, but people have fought and died for his right to say it. Nolan is one of those people that has willingly stepped up and to this day defends his country by his military service. After serving in other countries, I would imagine he knows what our freedoms mean to us first hand.

And Dan, if you don't watch the language we will have to give you a time out in the corner. That you scare you about as much as the Corporation Counsel's empty threats.

Requests for comments were made to Chief Teale, Chief Milner, Corporation Counsel John Rose and Union President Vincent Fusco. As of this time......no comment.

I'm thinking all the firefighters should put "Charlie Teale can go f**k himself" bumper stickers on their vehicles and park them in the firehouse!!

Kevin,I have been following your blog for some time regarding Dan Nolan's termination and other Fire Dept issues. Dan Nolan was put on paid administative leave 6 months after he returned from Iraq. He returned from Iraq on a Friday night and was at work at the training academy the following Monday morning because he a recruit class starting. He has always been very dedicated. I can understand his frustration regarding his termination. He has been dealing with this for over 18 months. I am sure he appreciates your coverage and hopefully it will be resolved soon. So many of his supporters are happy that he is finally going to have his hearing.

Is it possible to post pictures on this blog??

in all honesty i"m not sure if you can post a picture in a reply, I don't think you can though, you can e-mail it to me at krbrookman@earthlink.net and I can post it if you would like. Any e-mails and information are kept confidential

Sticks and stones will break your bones, but words will never hurt you.

I may disagree with what many people do or say; particularly the Ku Klux Klan and that whacko group that protests at veterans funerals. I also hate the idea of burning the flag in protest. HOWEVER, all of these are protected by our first amendment rights upon which our great nation was founded. I will defend your rights to be a jerk, (my response would be to have a larger, louder turnout then yours). Apparently Dan Nolan is willing to defend that right to the death as he proudly serves in the US Military.

Hartford Citizens should utilize their rights to protest the outrageous costs to the city that lawsuits will incur.

I wonder if Milner would have had a problem with anti Bush bumper stickers.

I don't understand why Teale is so upset with Nolan, I think he was just trying to give him advice. The advice was to stop letting Perez f**k him, and to f**k himself instead. I think that's pretty good advice so I will do the same - Teale, go f**k yourself.