IS THE NEW PUBLIC SAFETY COMPLEX IN JEOPARDY ? 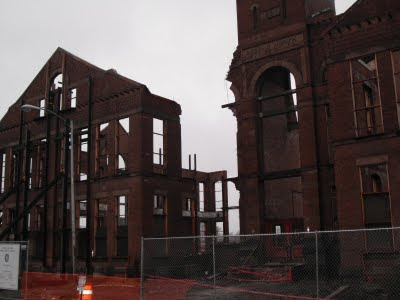 The above picture is the front facade of the old Hartford High School and intended to be the front of the new Hartford Public Safety Complex. The large open area between the right portion and the left portion is one of several areas of the building that have collapsed


Although a couple of groundbreaking ceremonies have been held for the "new" Public Safety Complex, it may be further behind now than it was at the first groundbreaking ceremony several years ago. For those that travel in the area of the construction sight, High Street has been totally closed to traffic, apparently due to the collapse threat of the remaining structure.

As anyone who has viewed the site. the brick exterior walls of the old Hartford High School were saved to form the exterior of the new complex. At a cost of almost $3,000,000 (yes, that's millions) steel support beams were used to shore up the walls in an attempt to keep them structurally sound.

Apparently that investment wasn't a wise one as large portions of the walls have been collapsing. On Saturday, a source familiar with the project said that the rest of the building may have to be razed and the project redesigned as a totally new structure and new design. This would render the majority of the current design work useless.

As of the last groundbreaking, statements from the Mayor's Office indicated that funds were in place for less than one-third of the $80,000,000 price tag. That figure seems irrelevant now as any new design work will only add to the final cost unless the project is scaled back to reduce costs.

As any one familiar with the Perez Administration knows, "cutting spending" or "reducing costs" is not a term used in their vocabulary.
Posted by KEVIN BROOKMAN at 4:02 PM