ANOTHER FROM THE ONLY IN HARTFORD FILE, MAYOR'S DRIVER ARRESTED FOR OPERATING UNDER SUSPENSION 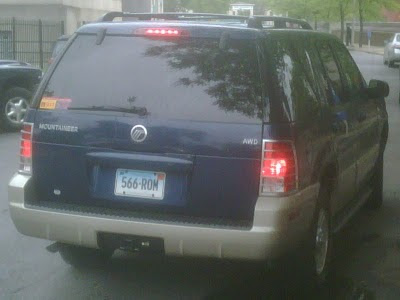 For anyone that reads this blog, you know that I am very critical of the position for the driver for Mayor Perez being funded when the city is in dire financial straits.

And now, in a move that makes you shake your head in disbelief, it seems that the Mayor's driver should not even be on the road in the first place.

From what police sources are telling me, the Mayor's driver, Pedro Bermudez, 51, had dropped his precious cargo off at the Courthouse for the afternoon session of the Mayor's corruption trial.After leaving the court, the Mayor's driver was involved in an accident at Park and Lafayette Streets. The other vehicle evaded and left the scene, and from what sources are telling me, it actually is believed to belong to a court reporter. UPDATE: 6/2/2010, 4:30PM the evading vehicle was operated by Juan Garcia, a clerk at the Court at 95 Washington Street, he has been charged with evading responsibility.

The driver of the Mayor's vehicle apparently called police and an Officer arrived to complete the accident report.Upon beginning the investigation, the Mayor's driver handed the officer a drivers license from Puerto Rico, which was invalid. It seems as though the Officer explained that to him, at which time the driver reluctantly handed the Officer a Connecticut license.

Somewhere around that time a verbal exchange took place between the Officer and the Mayor's driver and the driver voiced his displeasure with the officer wasting time checking on his license when he should be searching for the evading vehicle.

Ultimately it turned out that Bermudez didn't want the officer checking on his license for a good reason. His Connecticut license had been suspended over 8 years ago and he was not allowed to be driving any vehicle.

Why is it that these things happen when we have so many high-priced members of the "Perez Management Team" that should be watching out for things like this?

Immediately after the Officer finished with his investigation he was summoned to the Mayor's Office by the Mayor's Chief of Staff Susan McMullen. Can anyone say interfereing with a Police Officer?

As soon as the report is ready, it will be posted here.

In the meantime Mr. Mayor, might I suggest that you let your fingers do the walking, try Yellow Cab at 666-6666.

A request for comment has not been returned by Sarah Barr, the Mayor's spokesperson.
Posted by KEVIN BROOKMAN at 3:20 PM

Kevin,
This is crazy, when you get the report please post it online. What is the driver's name?

Driver on cell: "Eddie you need to help me some cop is about to charge me with operating under suspension."

Eddie: "OK I can't do much personally because I'm in court for corruption charges. I'll call Susan."

Susan: "So you want me to call the officer into my office and sort of shake him up. If I can't get him to reconsider we will make his life hell?"

Glad you go this out there fast. Now it will look very questionable if they try and squash it.

I don't understand why the clerk just didn't stop? I can only assume that he is driving a properly registered, insured car and that he has a valid driver's license. He must really be embarrassed now with making such poor judgment. I have been hit by another vehicle who then ran a total of five times in the past dozen years, all in Hartford's South End. Of course I call the police, get a report and am typically told I might want to consider not reporting the incident to my insurer, so end the end I am left with higher insurance rates and a dented car. Driving in Hartford is ridiculous!

Eddie doesnt need a fkn driver in the first place....let him do what other Mayor's do from cities alot larger then Hartford...DRIVE YOURSELF

Is that the mayor's ACTUAL SUV? How come it does not have a municipal plate like all other city cars? I thought it Had HFD*1 or 1*HFD- That is what Mike Peter's city car had for a plate.

I got sideswiped heading to work downtown. I reported in to HPD who gave me a case number over the phone, never even investigated. Apparently the other driver worked near me because I saw him a couple of weeks later and followed him to his parking garage. I called the police with the info. Guess what? No charges.

It's not that the police don't have more important things to do, but the investigation was done for them.

Many cheers to Kevin for breaking this story. I don't know what else to say. First Eric Jackson and now the mayor's driver? Perhaps city workers should just get paid mileage.

Of course the guy should get the boot. I hope he doesn't end up with a promotion.

Mayor Mike used to have the 1-HTFD municipal plate. People used to love seeing that plate around.

For whatever reason, Perez claimed for security reasons after 9/11, the plate was changed to a regular passenger plate, 566-ROM.

I may not be seeing the license plate clear enough. I beleive a car being used as "livery" be registered that way in the state of CT since the city is paying a driver. Im sure it is not insured that way either! Just some more state laws that are overlooked!

So, what was Eddie's driver's license suspended for in the first place? Wanna bet Eddie himself either doesn't have a license or it is suspended???

Eddie drives an unmarked car for security reasons??? What terrorist in his right mind is gonna wanna jack Eddie?

There is no 1HTFD municipal! All of Hartford's Municipal plates are x.HFD

Jeff,
Any chance your post is factual versus sarcastic whit? Let me know.

Jeff,
Any chance your post is factual versus sarcastic whit? Let me know.

The driver and the mayor should be charged with misuse of plates. That SUV should have HFD*1 (Municipal) plate- If it is registered to the city. New Haven has NH*1 on his Prius with no assigned driver. Bridgeport is BPT-1-. Shame on Perez! that car should not be anywhere he is ashamed to be seen!

CT Guy, It's my interpretation of how it went down. Kevin said the officer was called down to city hall and I don't see why he needed to be other then Eddie sticking his nose into things.

So, now, this begs the question: If the Mayor's driver has a suspended license, presumably he cannot drive legally in the State of CT, so, will he actually continue to drive the mayor around? If not, will he get a pay check for being a driver that can't drive???