HOW DO YOU SAY HYPOCRITE IN MANDARIN CHINESE? 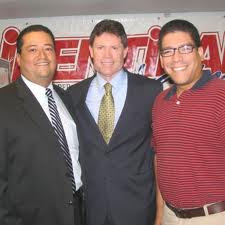 KELVIN ROLDAN, PICTURED ON THE RIGHT

Roldan, who rose up quickly through the Perez administration and until he landed his lucrative Board of Education job, was one of the behind the scenes henchman for Perez. Roldan, also known as the fictitious creator of Perez's phony e-mail address "willienunes@hartford.gov", has now seemed to have appointed himself as the champion of truth and justice.

Roldan once again chose to take a shot at Hartford Mayor Pedro Segarra today, insinuating that Segarra made a special deal for a payment to Carlos Costa, the contractor in the Perez corruption case.The press release is below.Maybe Roldan needs to be reminded that he is where he is today because of his close allegiance to a corrupt official and a corrupt system that is still alive and well today.

Hartford State Representative Kelvin Roldan called on Hartford Mayor Pedro Segarra today to release all city documents concerning the decision of his administration and the city council to authorize the payment of $485,000 to Carlos Costa and his firm USA Contractors in September of 2010. Costa was denied Accelerated Rehabilitation today in Hartford Superior Court for his alleged role in a bribery scheme involving the very contract the Segarra administration authorized additional payments for in 2010.

“Mayor Segara defended this $485,000 payment to Costa in September by stating it was in the financial interests of the city. However most citizens find it hard to understand why the Mayor and city council would think it was in the best interests of the city to pay nearly half a million dollars to a contractor accused of bribery, who was at the center of a scandal that seriously damaged the public trust in city government. Segarra should release all documents concerning this settlement to the public as immediately. Only through full disclosure of all documents, including e-mails, letters, briefs and memos will the public have the chance to make their own judgment about the soundness of the decision by the Mayor and council to authorize this nearly half a million dollar payment.” Roldan stated

Posted by KEVIN BROOKMAN at 6:01 PM

Kevin, I think you would say "wěi jūn zǐ"

A Sad Week and Weekend for Pedro Segarra, he blunder big time (FKUP) not a stock symbol-and will be possibly "Punk'd" this weekend by the BOA, How Humiliating on a political year.

explain how Kelvins press release is coming from his State Rep.office as a candidate running for Mayor does this not read ETHICS!!!!

You have a valid point since I think he is requesting the information to sling mud at Segarra as an "unannounced, unsure, still testing the waters. uncommitted" Mayoral candidate. It has nothing to do with his position as a State Representative.

With that being said, I believe that the e-mail was sent from someone on his "campaign/exploratory committee/undecided/unsure/uncommitted" political effort and not using any City or State Resources.

Pedrito,
is causing his own problems He sees eddie on a "arroz con culo" He sees Eddie on his toothbrush, his early morning coffee, y en las sombras.