MORE DETAILS ON "UP IN SMOKE" 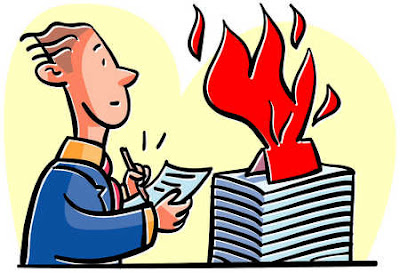 Although it might be difficult to obtain documents from the City of Hartford, it is totally a different story with the State of Connecticut.

Within minutes of requesting documents from the State of Connecticut regarding the records "destroyed" recently by the Hartford Police Department, I received what I requested via e-mail. The City has not provided any documents regarding the incinerated documents or any details as to specifically what was destroyed.

HPD sources are telling me that payroll records through 2008 were incinerated along with numerous other documents. In the attached request for permission to destroy the documents, the State of Connecticut specifically denied HPD permission to do that. HPD spokesperson Nancy Mulroy could not confirm what documents were destroyed.

In addition, in the request to destroy the records, both Hartford Police Chief Daryl K. Roberts and Mayor Pedro Segarra both signed the state's forms certifying that "No records listed, in our opinion, pertain to any pending case, claim or action".

It might be possible that Mayor Segarra had no knowledge of the "impending storm" when he signed off on May 2, 2011, but I'm not sure that the Chief and his staff can say the same.

Considering that one officer is already under arrest for payroll fraud, others might be implicated, an investigation is about to commence tomorrow and who knows where that will lead, it seems somewhat less than truthful that they could certify that "No records listed, in our opinion, pertain to any pending case, claim or action".

And still, the question needs to be asked, why the rush to burn documents that might prove helpful in the outcome of an investigation that is purported to be trying to get to the truth and maintain the "integrity" of HPD. Unless maybe we can't handle the "truth".

And again, the offer still stands that if Chief Roberts or HPD would like to provide the inventory of actual documents destroyed, I will gladly post them here.

Hartford Disposals From 2001
Posted by KEVIN BROOKMAN at 8:12 PM

A previous commenter said a person just needs to keep their heads down and do nothing wrong.

Seriously how is anyone safe when Nancy Mulroy outright lied and said they had permission from the state to burn the time cards and now she's saying she's not sure what was burnt? Also the Chief decided to burn the time cards regardless of being told by the state he can't? These people are noting more than liars with no morals, plain and simple. This needs to be pushed to main stream media so a lot more people know how Mayor Segarra lets Roberts run HPD. Let's see how that looks during election time.

to both Anonymous posters,

First, lighten up on Mulroy. She passes on what she is told and if the information isn't given to her, she can't pass it on correctly.

Second, I choose to give Frank Rudewicz the benefit of the doubt until proven otherwise. The people he has assigned to this investigation, from what he has told me when I spoke with him Tuesday, include a retired FBI agent, a former Massachusetts State Police investigator and others. I doubt that any of them will jeopardize their reputations by a poor investigation, but time will tell. There is enough information out there now, as well as new information coming to light daily, that we know that there most likely will be serious problems uncovered.

i dont believe anyone at this point believes that mayor segarra is ignorant to all of the dirty goings on at hpd. the question remains...when is he gonna do something??? how can he sit idly by and allow daryl to smear what's left of his good name, especially knowing that an election year is right around the corner? is it impossible to have daryl step down and name an interim? we all know the choices are few but somethings gotta give. i know the city would have to pay the remainder of daryl's contract but in the end the city will save in lawsuit expenses for the ones yet to be filed (and i'm sure they are forthcoming). the interim(as long as it's not one of the dirty half dozen)can't possibly do any worse until a suitable replacement is found. even thoCacapt. joe doesn't want it, i'm sure he would take it on an interim basis if it were for the good of the department. hey pedro! take some action and take it now! PLEASE

Kevin you give Nancy way too much credit. She said she had approval to burn those time cards in her very own post. Clearly not only did she NOT have approval she was denied it. As far as what was burnt all she has to do is take a walk down the hall and look at what time cards HPD still has in boxes and subtract. I'm done buying into their lies and excuses. They must think people are idiots.

I agree they will not jeopardize their reputations but who is paying them for the investigation? Hartford right? Rest assured the final report will get filtered by Mayor Segarra before anyone lays eyes on it so no matter how legitimate they do of a job it's pointless.

THAT'S IMPOSSIBLE! How can anybody be that stupid??? Kevin, this is huge, the City is held to a set standards of record retention by the state. They (and when I say they, I mean Roberts, McKrash, and the Captain that executed the burn) ignored the guidelines and burned documents which could have helped Robles or help convict him and many, many, many, many others. THEY BURNED THE RECORDS WHEN THEY WERE TOLD NOT TO! THAT'S A COVER-UP.

I mean I can understand lying about not seeing a 12 foot long gouge dent 4 inches below the drivers door handle, but this is unbelievable....

Anonymous at 10:24, you hit the nail right on the head, THE RESULTS ARE POINTLESS no matter how the investigation goes. Segarra will choose what he wants to make public from the investigation results, assuming he doesn't go as far as fabricating his own results. What needs to happen is The Dept. Of Justice needs to do their own.
Kevin, how can we get that ball rolling?

Why in God's name is the Courant not carrying this story? Are they a newspaper or not? If they aren't going to print the news, they should just shut their doors and be done with it.

The second floor of HPD is running the dept into the ground. It will take decades and millions of dollars to fix this place. Morale is gone, there is no positive leadership. Just a bunch of bullies..... I bet if the civilian ride along program was re established, things would change...........Hint Hint kevin..

Captain Joe Buyak would never allow this department to sink into the second relm of hell that it has, if he were chief.........

I can't wait for that brain surgeon nancy mulroy to come up with another mickey mouse excuse... just blame the state i guess.. that is what perez use to do, blame the governor...