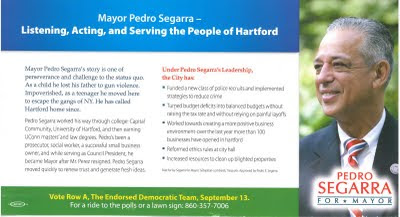 The Hartford Courant is reporting this afternoon that the Hartford Police Union is endorsing Mayor Pedro Segarra for election in the upcoming primary. I have to ask why? Could a contract settlement be imminent now?

Let's look at Mayor Segarra's real track record on crime, not the one that is claimed in his campaign propaganda. The fact of the matter is that Mayor Segarra's budget for the upcoming year specifically made large cuts to the very Department he claims to be increasing. Segarra approved a budget that cut almost $1 million from Chief Roberts proposed budget.

No other City department suffered substantial cuts like that. $500,000 alone was cut from the Police Department overtime budget at a time when homicides and shootings were escalating to what at that time promised some record numbers for the year. Another $300,000 in cuts were made to Chief Roberts budget for his office and Command Staff. Although the intent of the City Council apparently was to eliminate two Assistant Chief positions in a top heavy administration, instead recruit positions were cut from the latest Police Academy class.

Those recruits cut were from the latest class of what was supposed to have been 30 new police officers for Hartford's streets. Again let's look at the facts. Last year in 2010, one week after Segarra assumed office after Eddie Perez's felony convictions, a class was graduated from the Academy which brought the sworn officer strength of HPD to about 465 officers. Now, a little over one year later after Segarra assumed office, the actual sworn strength of the Hartford Police Department is less than 425 officers and continues to drop due to attrition, retirements, terminations, etc.

Even when the current class graduates and makes it through their "FTO" (Field Training Officer) period, the numbers will still be far less than when Segarra assumed office. And the potential is there, at the current hiring rate and loss rate, that next year at this time the sworn number could be 400 officers or less. Maybe we should find some money to hire laid off Troopers that are ready to go and work immediately.

It is also misleading and disheartening to hear the claims that Mayor Segarra spearheaded and according to the HPD Union press release Segarra "supported ...a Gun Task Force to promote a safer more vibrant community." . The fact of the matter is that under Segarra there was no initiative launched to stem gun violence in the City until Governor Malloy stepped in and through States Attorney Kevin Kane took control and organized the Shooting Task Force.

The HPD union press release further states "He (Segarra) has clearly set lofty goals for public safety personnel who serve this City and has taken steps to independently review the operation of the police department's command structure. We support his actions and vision". Again, let's deal with the facts. There are no goals, lofty or otherwise, being set for the Hartford Police Department by Mayor Segarra.

The administration and Command staff at HPD are in total free fall now, just waiting for the Rudewicz report to be submitted, and in the mean time Segarra is doing nothing to stabilize the organization. He as allowed actions to take place that in private he admits are wrong, but publicly does nothing, most likely worried about the impact his actions might have on specific voting blocks in the City.

Anyone who read the over 100 comments on last weeks posting regarding HPD, whether you believe the comments or not, would have to feel there may be a problem at HPD.

For Mayor Segarra to now claim to be the "Law and Order Mayor" is less than genuine. If he was in fact concerned with the stability of HPD, would the men and women of the Department be working over a year without a contract under his administration?

Why can't we start dealing with the facts when we select our next Mayor rather than being guided by false rhetoric and propaganda?
Posted by KEVIN BROOKMAN at 4:25 PM

how about saving the taxpayer some money by addressing the pension god old boys network in HPD and HFD its such a good idea the Gov is doing it on a state level and stats and municipalities across the country are adding but not HARTFORD, why is that?

I have not been contacted officially by the police union. By email or letter. As an officer and member i think a vote should had been taken. Just like when we bumped the last prez out. It is depressing that the only time politicians come sniffing around is election time. Its sad. If a vote of no confidence was taken. It would be interesting.

Segarra will lose on tues anyways. It wont matter. Vargas will be the next mayor. Time to get clean house!!

Hartford Police fund their own pension plans. The city does not contribute to it and it had been that way for over 30 years. The city does adminster pension payments to recepients and would certainly like to borrow as much as they could. It is fortunate that some guys with alot of foresight, Tom Grodecki, the late James Quigley and others were not asleep at the switch because that is how our pensions were secured.

We did as needed, played by the rules, contributed 8% to out pensions for our careers and have earned what we currently receive.

If you live and work in hartford, you must know this is a joke right?

The Hartford Police Department Union is weak at best.
Today, real cops go to IAD without union reps. Who do they run into? none other than the former union president, who by the way paid $1,000.00 of union member money to Hector Robles's atty fees. But not a dime to Lt. Dailey.
A former president who is incapabile of commanding a position in Patrol after being unseated by a street cop. One who is now placed in charge of an officers lethal injection or suspention, after she towed the vehicle of an operator with an unregistered, state owned motor vehicle whose boss just happens to be an old hen.

Robles is a crrok who should go to jail.

The union endorsed Pedro on my nickel and dime but accidently forgot to ask me for my vote.

@ Union member; The Union is only as strong as its weakest member. Any union member who goes upstairs to IAD without a Union Steward is taking a huge gamble, and if that gamble pays off, GREAT. If not they have only themselves to blame. (Don’t think I have seen the former president up in IAD).
@ 20 n out; The Union Executive Board did not need you to vote on this issue. Back when you (we) voted the current board into power; we gave them the ability to make decisions like this and others. If you are dissatisfied with this endorsement I suggest you show up at the next union meeting, voice your displeasure and vote accordingly at the next election.

I remember watching Miami Vice as a child and looking at Detective Crockett and Tubbs and said damn thats what I wanna do I was 6 years old at the time they fought crime chased the bad guys and looked good in those silk suits doing it. Hollywood left out the part about all the dirty politics backstabbing and corrupt administration that came along with it. Boy did i get a rude awakening for our city to be this small its very sad that there is this much corruption oh well my other favorite tv show was the A-Team im a show up to roll call with a Mohawk see if a LT. chews me out