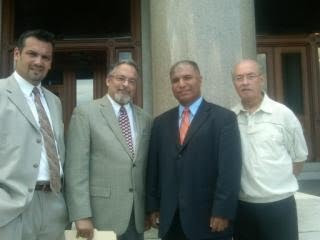 It looks like we may have a new political tradition in the making, an election season won't be complete without a police complaint against Hartford Democratic Town Committee Secretary Angel Morales.

For regular readers of the blog, you will remember the incident last year where he was accused of bringing a young man back to his campaign headquarters and disrobing and dancing in front of the young man wearing only his navy blue boxers. The young victim of Morales's "performance" fled from the office and reported the incident to police.

Morales had picked the young man up in a vehicle he had rented through his campaign funds, a Lincoln Continental Mark IV. Although Morales was operating under suspension, the entire matter was "squashed" and no charges were brought.

The original posting can be read by clicking here

Here is the police report for that incident:
Morales Case Report-redacted

Now it seems that Morales is being accused of breach of peace after he created a disturbance at a polling place on Tuesday. The complaint was made by the moderator for the polls at the Learning Corridor.Although the moderator didn't know that the individual was Angel Morales, several sources I spoke with identified the suspect as Morales.

According to the sources, Morales entered the polling location and for some reason began yelling at the moderator, claiming that he was from the Mayor's Office and was going to teach the moderator a lesson. According to the sources who witnessed the incident, at one point Morales became very agitated and approached the moderator in a physically threatening manner. At that point security officials for the Learning Corridor were just arriving and they physically removed Morales from the building.

The matter is currently under investigation according to the HPD incident report. We will have to see if this one gets "squashed" also, only time will tell.

Here is the incident report for the 2nd Annual Angel Morales Election Incident:
***As I mentioned above, the moderator wasn't familiar with Angel Morales, other sources at the polling place identified the subject as Angel Morales, Hartford Democratic Town Committee Secretary . Morales has also interned at the Capitol for State Rep. Minnie Gonzalez and he claimed to be a paid campaign staffer for Mayor Segarra. I COULDN'T GET THE DOCUMENT TO SAVE AS "LANDSCAPE", SORRY FOR THE INCONVENIENCE
MORALES INCIDENT REPORT 11 8 2011
Posted by KEVIN BROOKMAN at 9:47 AM

Angel was probably hanging around the Learning Corridor to hit on young boys as he was doing at the public library, where he accosted the Mayor's nephew.The Mayor thought so much of that,he hired Angel as a campaign staffer and if rumor has it correctly,Angel has been offered a job in Hartford's Youth Services after the Mayor is sworn in.Angle is also an intern for Representative Minnie Gonzalez and her son Ivan Maldonado has been arested for several felonies, among which is one alleging raping a 12 year old girl.

Now if the Mayor also gives Ivan a job in youth sevices with Angel, Ivan can "handle" the young girls while Angel dances or "handles" the young boys.

I was contemplating not approving the above comment, but since Mr. Maldonado is also currently an elected member of the Hartford Democratic Town Committee, I think the information is fair game.

The term is "quashed" not squashed.

both are acceptgable, please see definition 2 below:

verb (used with object)
1.
to press into a flat mass or pulp; crush: She squashed the flower under her heel.

2.
to suppress or put down; quash.

3.
to silence or disconcert (someone), as with a crushing retort or emotional or psychological pressure.

4.
to press forcibly against or cram into a small space; squeeze.

"quash" may be the more legal term as applied to a court action, Squash maybe be when the act is lees than legal.

This reminds me of penn state current issues. Sooner or later this clown morales will drag everyone including the mayor down with him.

If in fact it was Angel Morales, who worked on the mayors campaign, by being in the voting area didn't he violate that 75 foot rule. Then when does the election rules apply to Hartford????

The better question is....Why would the Mayor,knowing about Morales's predilictions,and knowing that Morales accosted his nephew,agree to have him as a campaign person anyway?

I guess this city will never learn, and neither will Pedro. How can you as Mayor put this clown in charge of anything especially anything involving youth in the city of Hartford. You know what he has done and shame on you if you allow the fox into the hen house. I can tell you one thing and as a Lawyer you should look up theses statues 1.) being a co conspirator and 2.) an accessory to a crime, because that is what you should be charged with if you allow/enable this preaditor to victimize hartfords youth.

It has come to our attention that you might choose either Kennelly or Page as the new Corporation Counsel.Either one has terrible bagage.Kennelly is being sued by the mother of his out of wedlock baby...Jennifer DePerry...Docket Number FA10-4053608...and a recent Motion For Payment was made...meaning he hasnt paid her child support and appears to be a deadbeat.Also consider that the Hartford Club and the Ct Student Loan Foundation recently sued him for non-payment of dues and loans and he seems to have trouble meeting his legal obligations.

Page also has problems and baggage.He couldnt supervise his office manager and she recently stole hundreds of thousands of dollars from his business.If he cant properly supervise a sole lawyer firm how could he ever run the Corporation Counsel office?
In addition,it appears he is so hard up that he has to resort to renting rooms to borders in his house.And he has had grievence findings recently...ask Aponte what they are.

Both men are know to drink excessively and are close to Felon Angel Morales.

You would do better perhaps by appointing Lisa Silvestri as your Corporation Counsel.She worked there before and is there now part time and has no or little personal baggage.