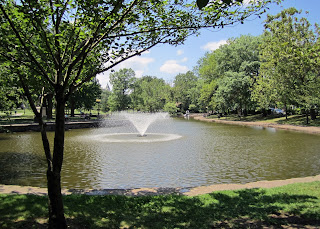 FROM THE HARTFORD POLICE:
Hartford Police Officers were dispatched to the Bushnell Park pond at approximately 1030pm on a report of an unresponsive person. Officers located the 63 year old male and initiated CPR and emergency medical treatment. He was transported to Hartford Hospital where he was pronounced dead a short time later. The two people who initially found the man reported he was discovered lying face down on the rock skirt wall of the Bushnell Park Pond. He was in contact with the water. Major Crimes Detectives conducted the investigation.

Why did sgt klin work as a bike officer at the last meadows concert when he is not bike certified, and was working as an officer. I find it hard to believe that the entire ofc list and det lists were exhausted so klin could ride around on the gator. Things that make you go ... Hmmmmm and i heard that ofcs were sent home so klin could work. How can a un bike certified sgt work as an ofc and ride around on the gator and do absolutely no productivity at the concert.... I feel that this illusion of grandger or alternate klin universe has caused enough disingenuous feelings. If the meadows higher ups only knew the games that are played in order to savor the juices of their money .

how do you drown in that pond? sounds like its a stat that they wanted off the books

Please stop the madness and shut up please. The story was about the 63 year old man who died in Bushnell Park

Klin was hired because he is best friends with mefferd.
Talk about favoritism & nepotism.

Klin has lost his mind and Lieutenant's and above let him do whatever he wants. Since he has been in the PJ office he has been the highest paid Sergeant in the department, if not, very close to the top earner. He's always done absolutely nothing and has avoided doing any police work. What has he ever done? He does the least, yet makes the most.....hmmmm.
Then he works the warped tour, does nothing but ride around on a gator all day, while hired as a bike officer, and he isn't bike certified, this is fair?
Then....part II, when done with the warped tour PJ, he gets dirty hired to work the traffic detail and run the box at Market and Morgan St, while out of uniform in his unauthorized bike shorts and shirt. Must've been about a 20 hour hit for Klin!!!! Good for him! No one else would be allowed to do that, different standards for Klin.

I know this blog is used as a sounding board for many at HPD, but please try to stay on point with the comments. Sgt. Klin seems to be an issue for many of you. I suggest it might be more effective to make a gmail account and email your comments and information to Chief Rovella, who would most likely address your issues immediately as he has done with many of the issues posted here. He can be reached at policechief@hartford.gov

Kevin:
The PJ office should be a civilian position. It has always been the most corrupt position in this department. The position itself leads to corruption. You know which jobs are short, you do the hiring and no one not even Rovella stops it. There is no reason someone who has no vested interest in the hiring should not be doing that job. Klin is the lastest in a long string of people who have made that position into a personal money maker. Klin just is the most obvious. Last Sunday he was hired as on officer, yet the only real officer working the detail was sent home after 8 so Klin and Holton could stay and reap overtime.

Nothin going to happen. Klin has been stagnent in that postion for like 6 years. He is rude and lazy to everyone. But is protected by the high powers. Please dont let klins lazy work reflect on the entire dept. i personally dont care if he commits fraud, but it is also contributing to low morale and he should be setting a better example for the troops. I worked for klin in the field and he was ok. Once he went into that pj slot, the games begun ..

Some meat left on my chicken wing said...

Klin is ok, he always hires me and brings me water on my 2 hour js.

Klin is probably workin the meadows concert right now. Sitting in the take home pj car. I have nothing but respect for the traffic divison, but klin poisons the hire process and his slug like behavior takes away from the high guidlines that traffic is held to.

Kevin, I know your a Rovella supporter, but if he's at the top,hired from inside the department and needs to be informed of all this nonsense via e-mailed by his subordinates , is he the right guy for the job? I'm not a cop , so can somebody respond as to whether Rovella is to "inside" and thats why he keeps turning a blind eye to what appears to be serious and ongoing issues?

I don't think a blind eye has been turned to anything, but I also don't think an Chief could be digging down through all of the layers to every issue. I would hope subordinates would be getting a handle on what is going on in the PJ office and bringing it to the chief's attention. In theory there should be a Lieutenant, a captain and a Deputy chief between Rovella and the PJ Office, I would hope that they would see the comments here and be looking into it if there is actually something wrong there.

The same could be said for City hall, shouldn't someone such as mayor Segarra or Councilpeople who spend so mush time there be aware of what is going on or are they "too inside" and have to react to things that are posted here?

My point in my comment yesterday was that I really don't want to get the comments into mudslinging (any more than they already are)if there is a problem with Sgt. Klin or anyone else, one posting should be enough to draw attention and the constant negative comments are more about entertainment than identifying a problem. I am sure if the Chief reads the comments in blogposts or it is e-mailed directly to him, something will get done

Kevin, In regard to your response at 11:51 am ,the 1st link in your theory of utilizing a chain of command (lieutenant-captain-deputy chief) is already broken. The comments are about a LIEUTENANT! That being said ,the cleanup has to start at the top. I'm starting to rethink my position of hireing within , maybe its not the best policy.