REVIEW OF JUDGE'S ORDER SHOULD INCLUDE A MENTAL COMPETENCY HEARING.....OF THE JUDGE

Yesterday I posted about the escapades of Hartford Superior Court Judge Omar Williams and his Court Order  to return a stolen historical plaque from the Samuel Colt monument in Colt's Park to the thief who stole it off of the statue.

Apparently after the scrutiny of his order, the Honorable Judge Omar Williams has now scheduled another hearing for November 15, 2017 to reconsider or reverse his order. I am not sure why the order can't just be vacated, but I guess we will have to leave that up to the discretion of the good judge.

But in an effort for proper use of Judicial time, maybe Judge Williams could also schedule a Mental Competency hearing for himself and possibly explain how he ever thought this ruling made any sense in the first place. I think that would be a fair question for the Court to answer.

Here is the order below, signed by the  Honorable Judge Williams on September 15, 2017 ordering the return of the property to the thief, Rafael Sanchez 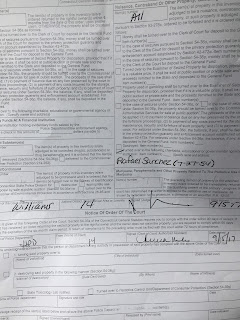 Posted by KEVIN BROOKMAN at 8:52 PM

The judge is not crazy . I think it was an error on paper.

I think that piece of paper refers to his personal property such as money , wallet or jewelry obviously not the stolen goods.

It’s liberal left wing judges like Omar Williams exactly why Hartford is a mess. That was no mistake. These liberal judges appointed by Malloy cater to criminals.

Looks more like an error by a clerk? Look at the two different writing styles -- just a guess. But certainly, the judge should have reviewed and put the order into context, i.e. WHAT was the case about -- STOLEN ARTWORK OF HISTORIC SIGNIFICANCE. That should be an interesting hearing . . . mea culpa opportunity maybe.

No competence hearing to Judge Omar Williams is needed, he should be disqualified and removed from the bench.

Where is foley been? No guest appearance at the gun buy back.
Keep your head up brian. Lemark wont take all the cash till 2020

I guess some more investigations into alleged hostile work place involving female employees ...
Its going to be a rough thanksgiving for BJF

- hopefully you dont support this sort of treatment mr brookman