Mayor Segarra today announced the appointment of Valda Washington as the permanent head of Hartford's Human Resources Department. This  couldn't have come at a more opportune time.

Quite frankly, the HR Department at City Hall is a mess under her leadership or lack thereof.
But now she must face the Hartford City Council to answer questions before she is approved by them. Where should I start the list of questions that hopefully we can have asked?

What experience does she have negotiating Union contracts, it would appear little or none if what Union reps are telling me is true. Why are people in her department going out on Medical leave due to stress? Why is she so concerned about the media reviewing her City credit card expenses that she would actually put her fears in writing through e-mails? And what's up with the West Hartford Massages?

And does she understand progressive discipline? How do you place an employee on paid Administrative leave and charge her with Gross Insubordination just because Washington believes she leaked e-mails to me? I can't wait to see that one before the Labor Board. How will you document what she did wrong, if anything at all.A clerical error on a payroll report? Clearly a mistake and far from anything warranting termination. It happens all the time .

The hearing officer should love that one. "Sir I believe she leaked my e-mails about the abuse of my City Credit card, she had to go". Immediately on to Superior court for award of damages I would imagine 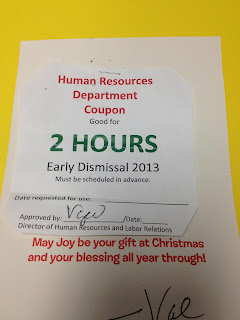 And who sends out"2 hour early dismissal vouchers" as a Christmas  present to City employees, another unwarranted expense on the City's dime. And if you want to present employees with a gift, pull out your own credit card and buy  them something.

The treatment of the employees under Washington, is the exact reason I have asked members of our legislative delegation to look into a bill that would provide "whistle blower" protection to Municipal employees.

Employees wishing to point out malfeasance by municipal officials should not have to be in fear of their jobs for doing the right thing. Hopefully the Hartford City Council will ask the important questions before another hiring mistake  is approved by an outsider who sees Hartford as a good paycheck and the next step on the career ladder

Hopefully Valda Washington will realize I will go to the mat for something I believe in. And that includes exposing a witchhunt to terrorize employees into keeping their mouths shut  and trying to terminate someone for doing the right thing. I realize she is new to Hartford, but she may want to go through the archives here to read about some of the fights and the outcome.

Dan Nolan is back, Neville Brooks is now a Deputy Chief and Darryl Roberts abruptly "retired" as a result of the Rudewicz report which came about because of the blog. Female employees in MHIS are no longer the victims of Sexual Harassment and a change in leadership occurred there when the Director was shown the door.And don't forget a lot of the information that was provided regarding our former Mayor Eddie A. Perez, who is now a convicted felon. The list could go on and on,  I don't even know the identity of my source from HR, but I am more than willing to fight for anyone that is wronged when they try to do the right thing.

That is how corruption flourishes, when good people with a conscience are threatened to keep quiet. Like the television ad says " If you see something, say something", and Ms. Washington, people are saying a lot, with or without your threats.

Game on.
Posted by KEVIN BROOKMAN at 4:21 PM

Val save up because after Brookman and HEMIA 's attorney is done with you, your going to need more than a massage your going to need a moving truck. Pedro, you appointed her you know how dis functional and incompenant she is so do the city's check book a big favor and show her the door before she cost the city big $$$ and she will.

Misuse of taxpayers $$$ should not be accepted a review of all of her spending should be done if there is misue found she should be walked out in handcuffs or the least that should happen is restitution and a pink slip, and I hope if she claims unemployment benifits the city better object.

Pedro, if found that she misused taxpayers $$$ then you have no other choice but to fire her don't ask for a resignation that's to soft and easy, "FIRE her ASS", or it will be yours in the "fire" . Don't brush this off like you did with the Jamacian fire truck, She's a dept. Head and if you can't trust her to be fiscally response then you don't need her, just look at how unhappy the people are who work for her, she's a bully, arrogant, condescending, narsistic and clearly incompentant. She should be put on leave while the investigation is conducted, see how she likes it, " those who live by the sword die by the sword" .

Kevin,
How does an incompetent b***h like Valda get hired to position she is clearly incapable of performing in the first place. She is a disgrace not only as a Human Resources Director but to humanity as well. Did Pedro just throw in the towel, give up on the city and has checked out from leading this city? Or is he just playing stupid again and claiming to be unaware of what is going on (That is really getting old). Scum like Valda needs to be exposed for the corrupt piece of crap bully she truly is. Keep digging Kevin, hold the leadership of the city accountable to ensure that this morally bankrupted imbecile is removed from her position.

She is a crook. Making huge $$$ and having the City buy her lunch and drinks? Doesn't she know what the City budget looks like? She just doesn't care. She should resign. As taxpayers we should attend her hearing in front of the council.

Lets see if Ken Kennedy acts the same way towards her as he did during the chiefs selection, if the council is given the information and its shown that she's misused the City's credit card(I.e. taxpayers money) and they appoint her they should all tender their resignation because they are just a curropt as she is, if that happens Kevin I hope the FBI or States Attorney looks at them and charges them as assecories after the fact, because they are just as guilty as she is.

So if I take a bunch of those early out cards and make photo copies, Can i use them for other city depts? This is such a conflict of interest, why has the city allowed this nonsense?

Lokks like this fell off the radar. When are the hearings?

Has the hammer dropped?

Whose are next guinea pig? I hope its not one of Pedro's or Saundra's best friends.