THANK YOU HPD, IT IS A QUALITY OF LIFE ISSUE 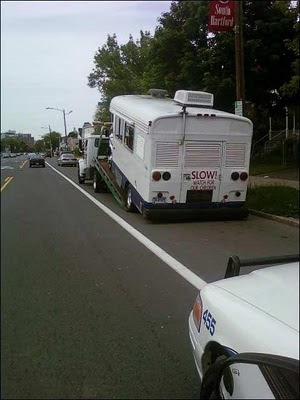 MARG, in conjunction with their Board President Hyacinth Yennie, is constantly fielding complaints at their community meetings regarding the Ice Cream trucks and their late night loudspeakers.

Recently at another meeting being held at Saint Augustine's Church basement, an Ice Cream truck parked outside with its loudspeaker blaring and actually making it difficult for those inside to hear the guest speaker at the meeting. Hyacinth went outside and advised the operator of the noise ordinance and asked him to turn the music down as a courtesy to those inside. The operator refused.

Unknown to the Ice Cream truck operator, MARG and its members also have an outstanding working relationship with their HPD Community Service Officers Ted Sposito and Carlo Faienza and the HPD Zone Lieutenant Robert Allan. The story about the Ice Cream truck was related to them and today apparently Officer Sposito heard the music and observed the truck violating Hartford's noise ordinance late in the afternoon.

Although in the overall picture, a loud Ice Cream truck may not seem like a large issue. On the other hand, it is probably the number one complaint I hear throughout the summer at community meetings relating to quality of life issues( that and ATV's racing on the streets).

Lieutenant Allan and his Community Service Officer's obviously get it. It's all about the "broken window theory", if you focus on the minor issues and send a clear message, the more severe issues tend not to develop.

Oh, and by the way, the photo above is that same Ice Cream truck being towed after Officer Sposito stopped the driver. He was violating the noise ordinance which would have resulted in a trip to Community Court. He apparently was also operating the truck without any insurance and that required a tow truck.

Good work to MARG and HPD.

nrz's how bout linda bayer big honcho money grubber....does not even live in hartford....wants to have say in all city policy....more 2 come..then again u coulda lkd at "her" ap...
signed another city worker scared to freakin' death for his job

A couple of years ago that might have been true about Linda Bayer's salary as a "consultant" to Hartford 2000. I think if you check now you will find that she is working for almost nothing since their funding has been cut.

I think you will find that groups that still raised issues opposing Perez, as the NRZ's have, had their funds drastically cut. Other groups that have not spoke out against issues in the City have had their funding increased by this Administration.

Wilbur Troutman would be very happy about MARG's work.

Linda Bayer lives in Wethersfield. Lillian Ruiz lives in Bloomfield. Dinesh Patel lives in Windsor. Mark McGovern lives in West Hartford. Kevin Burnham lives in East Hampton. Etc., etc. While the city charter requires that Directors live in Hartford, here you have a list of current, former, and/or acting directors off the top of my head that do not. Not a big fan of Linda, but the city doesn't even enforce its own internal residency policy.

When in Rome, I mean Hartford...

hmm look at cdbg and pcod and cip.,,makes me wonder if u r not a bit altrustic amigo

thank u kitty thought brookman was giving me a snow job

No, Linda Bayer is an acquaintance and not someone I know very well. Yes she does live outside of Hartford and I have always had a big issue with that. Do we really need someone outside of Hartford to tell us how to run our neighborhoods, are we that ignorant? But the facts are the facts, Linda Bayer did not take a salary when the money wasn't there. One Councilwoman's trip to San Antonio, TX cost the taxpayers more than what Linda Bayer cost the City for an entire year. And I will go out on a limb and say the benefit to us of Linda Bayer is far greater than a self serving trip to Texas by the Councilwoman.

But then again look at many of the "Executive Directors" of Hartford's non-profits. It drives me crazy when they show up at Council meetings looking for funding and list their addresses. The majority are from outside Hartford. They don't want to live here, but they do want our funding.

But, until Hartford residents start turning out and holding City Hall accountable, especially at Council meetings, they will continue to do what they want. As an example, if it wasn't for people speaking out about the reckless use of City credit cards, they would still be spending like crazy on them today. Instead their use was drastically cut and estimated spending in the first year was reduced by approximately $1.5 million.

We can make a difference, but not if we remain silent and don't hold our elected officials accountable.

Wow. What a symphony... Linda Bayer double/triple/cuadruple dips into multiple city funding sources, but only lists one of them on the 990? Like I said, when in Rome. Don't mind Kevin. He's a bit naive, but I think he's willing to learn if you give him concrete facts or tell him where to finds them.

Credit cards, so obvious... Have you looked @ the telephone bills??? Really, how many city employees need city cell phones or blackberries??? The city does not enforce collection of reimbursement for personal calls made on city lines. Talk about give aways and waste.

Feel free to educate me, I am more than willing to learn. Everyday this blog is a learning experience as I hear more and more. I do mean that with all sincerity.

As to double dipping, wait until you read tomorrow's post. My FOI request from the Democratic registrar was partially obtained today, and it is double dipping at its finest (or worst) depending if you are the one getting the paychecks and benefits.

It might just be time for the Public Integrity Unit to head back to Hartford City Hall for a while.

I agree whole heartedly the credit cards, or "p-cards" as the city purchasing cards are called, was an obvious issue, but nothing was done about it until I filed an FOI request to get the billing records and addressed the issue to the Council.

Use of phones, city cellphones, travel and even "take home" cars all seem obvious but nothing is done about them. Maybe if people started showing up and addressing them before the Council, things might change. The majority of the Council doesn't like being embarrassed, although at least two who always support Perez seem not to care.

Look at the Corporation Counsel's office, could it be any more obvious the waste and incompetence in that office? yet it goes on.