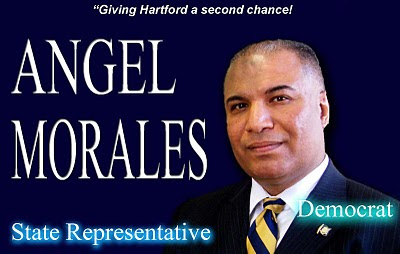 Yes, I am Angel Morales campaign manager, but I think this is worthy of posting here.

Pursuant to our conversation of Tuesday, July 27th. I am sending you this message to confirm CHDC`s unanimous endorsement of Mr. Angel Morales` candidacy to the Fourth State Representative District in Hartford. On Saturday, July 10th. the Connecticut Hispanic Democratic Caucus held interviews with candidates campaigning for various offices with the general assembly. Mr. Angel Morales of Hartford was one of these candidates. The following Tuesday, July 13th., CHDC met, deliberated, and unanimously endorsed Mr. Angel Morales to be the next state representative from the Fourth District. Based on the interview and information provided by the Hartford members of the CHDC, it was decided that Mr. Morales is an excellent and proven community leader and will make a fine legislator.
We are proud to formally endorse Angel Morales and look forward to working with him both in his campaign and once he becomes the next Fourth District State Representative.

Congratulations Angel. This endorsement speaks highly of Angel's capabilities over the incumbent legislator Angel intends to replace.
Posted by KEVIN BROOKMAN at 9:15 PM

rather than delete your narrow minded and moronic comment, I will address it. I have never deleted comments and I'm not going to start now.

As brilliant as your comment makes you sound, there is no such thing as an "ex-felon", once a felon, always a felon. I think you might have meant ex-offender. There is a difference, and as an ex-offender, Angel is open about his past and admits he made mistakes over 22 years ago, and has led an exemplary life since serving his time for his actions. A key part of his campaign is "second-chances" for ex-offenders, which since you seem to have led a perfect life, might not realize that there are people who made mistakes and when given the chance and support have become successful, productive members of society.

And although an "ex-felon" doesn't exist, "future felons" do, and we have plenty of them lurking in Hartford's political circles.

What's that saying...something about "lest ye be judged"

I apologize. I thought he might have received a pardon. My mistake.

Well congrats on endorsing a felon.

What was he convicted of 20+ years ago?

I have known Angel for a bunch of years (he used to work in the records department of my old law firm). He clearly has made some serious mistakes in his life but now he seems to be trying to stay on a better path. I wish him good luck and I would hope others would as well. As for the endorsement, yeah it was pretty interesting, though not as interesting as the Caucus endorsing John Fonfara over Ed Vargas, who is a member of the Caucus, or even as interesting as Vargas casting his own vote for Angel, rather than Kelvin, presumably because both Angel and Ed appear on Row B in the 4th.

Rich...ballot position tactics frankly dont have much meaning.As you are aware the "party lever" went the way of high button shoes and Connecticut has the highest literacy and the highest education rate in the nation.Our folks in this state are well versed in splitting their voting and ballot position has little meaning.If ballot position and an endorsement meant much then there would have been far less challengers winning primaries these last 30 years.

Sometimes political operatives make too much of ballot position in their quest to look for every advantage they can.The best way to garner support among the vox populi is to overwhelm them with superior positions on the vital issues of the day coupled with a superior graound game and an excellent GOTV.

Kevin while it is always nice to get endorsements, this one by the CHDC isn't as meaningful as it would have been before the law changed.Groups like the CHDC had the rug pulled out from under them in the reform of the campaign finance law a few years ago, so now as a group they cannot give an endorsed candidate money nor can they offer a candidate "like kind services" either.Any individual members could give an endorsed candidate as they could if they werent a member of CHDC.Though CHDC is a very worthy group, they and other groups are hampered by the reform of the election laws and like every other group,they will have to rethink their mission and how to tactically accomplish it.

One problem that CHDC has in particular is the impression that CHDC is a group of elected and ex Hispanic officials in the main, with a majority mostly from the New Haven area, except for some old timers and with Minnie Gonzalez and Ramon Arroyo having a large influence over the group.

Lets face it, a press conference endorsing a specific candidate in Hartford by Tommy Reyes,a well known political person from New Haven, has little meaning to the hispanic democrats in Hartford.I suppose a candidate getting the CHDC's endorsement realizes everything I have said and will throw their endorsement in a campaign brochure, making it a largely paper endorsement.

Brookman,
please cut the BS what did Angel do? Come out clean, did he kill, rape, molested, pretended, steal, what did he do?

Why Angel is asking for the 2nd chance????

The prime reason why "Ay Dios Santo" has been a fan of yours is because you expose everything; police reports, internal documents, personal conditions and FOI material.

Angel,Kevin come out clean, credibility is super important.
Amigo or not.

Angel Morales molested a minor. He does not ever mention that.