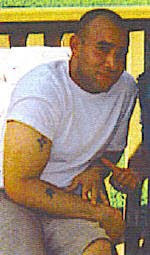 (Hartford) - Detectives of the Hartford Police Department's Juvenile Investigative Division are seeking public assistance in locating a missing Hartford man. Miles Douglas Wiles was last seen by his family on February 19th, 2010, at approximately 5 p.m. as he left his family's residence on foot.

Wiles, shown in the photo below, is described as a 28 year old, 6 ft, 240 lbs, light skin Hispanic male with short black hair and brown eyes. He was last seen wearing a khaki shirt and trousers. Family members indicate to police that it is unlike Wiles to not return home or not be in contact with his family.

Anyone with information on the whereabouts of Miles Douglas Wiles is asked to contact Hartford Police Detective Ivys Arroyo at 860-757-4236, or Hartford Police Sergeant Matthew Eisele at 860-757-4242. Confidential tips, for cash rewards, may be made by calling Hartford Crime Stoppers at 860-522-TIPS (8477).


As a sidenote, from what sources are telling me, Miles Wiles is the grandson of Hartford politician Abe Giles.
Posted by KEVIN BROOKMAN at 12:50 PM